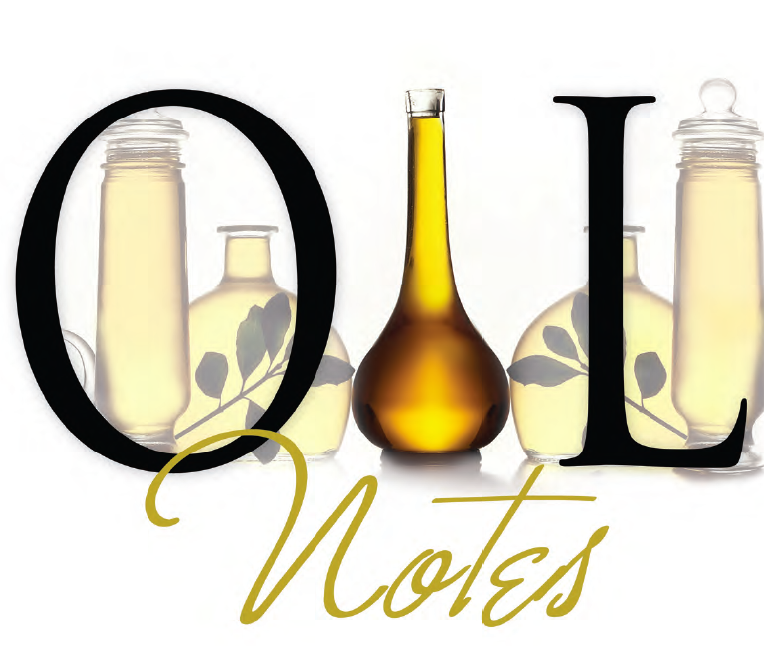 In this final part of a two-part series delving into the role various oils play in the pizza industry, this article looks at the recent ban on trans fats and how the continuing debate may soon affect you.

Today’s headlines are tomorrow’s headaches for many small business owners, and the debate over banning trans fat in cooking oils is one that may soon reach your pizzeria. For example, there wasn’t much surprise last year when a politically correct bastion of liberalism like New York City moved to ban trans fats from its city’s restaurants—but the Indiana State Fair? That’s right. At the 2007 Fair in Indianapolis, offi cials banned the substance from the myriad fryers at the traditional, deep-fried event.

According to a recent front page story in The New York Times, deep frying is indeed a raging passion at the Indiana State Fair. Among the numerous food selections is the cholesterol-busting Combo Plate, which consists of one battered Snickers bar, two battered Oreos and a battered Reese’s Peanut Butter Cup. The Combo Plate was available at this year’s Fair too, but after the ban, operators switched to soybean oil. “This as an issue we wanted to tackle,” the Fair’s executive director, Cindy Hoye, told the Times. To that end, she said various oils were tested over the winter months to come up with more healthy alternatives. “We feel we are now off ering better products,” she concluded. The use—or nonuse—of trans fats looks to an unsettled issue as the nation’s restaurants plan for a new year. One spokesman for the industry has already weighed in. “We don’t think a municipal health agency has any business banning a product the Food and Drug Administration has already approved,” Dan Fleshler, a spokesman for the National Restaurant Association declared when the ban was announced. (For the record, trans fats are believed to be harmful because they contribute to heart disease by raising bad cholesterol and lowering good cholesterol at the same time.) And just what are trans fats? (See box). 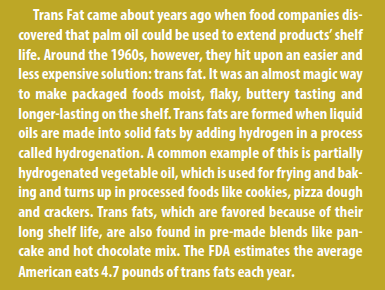 While New York’s move to ban trans fats has mostly been applauded by health and medical groups, the American Heart Association has warned that if restaurants aren’t given ample time to make the switch, they could end up reverting to ingredients high in saturated fat, like palm oil. (This oil is generally produced in Indonesia and Malaysia, and most scientists agree palm oil promotes heart disease, though not to the same extent as the typical partially hydrogenated oil.)

Now the race is on to discover tasty and cost effective substitutes. Kentucky Fried Chicken, for example, is using low-linoleic soybean oil, a mostly unsaturated fat. (Linoleic acid is the fatty acid most responsible for making soybean oil less stable and more prone to rapid spoiling. Soybeans bred to have low levels of linoleic acid produce soybean oil that is far less likely to deteriorate or go rancid and therefore does not need to be hydrogenated.)

Another replacement is a patented sunflower oil that is particularly high in unsaturated fat and low in saturated fat, making it a healthy choice. Unfortunately, it is often used by manufacturers in high-fat, high-sodium chips and cheese crackers—items that still need to be eaten in limited amounts if you’re trying to eat healthfully. Additional trans fat substitutes will no doubt crop up in the next couple of years. Fats that are healthy include olive, canola and peanut oils, which contain mostly monounsaturated fat, and polyunsaturated fats, like soybean and sunflower oils.

And before you think Indiana officials over-reacted with their ban, the fair is still a place where deep-fried delicacies can be found. At this year’s fair, attendees could sample, are you ready? Deep-fried Pepsi. According to the Times  story, Jeremy Orme, who runs Fried Creations, the company responsible for the Combo Plate, created the new dish. Orme says the treat is made with a Pepsi-based dough which he dips in a batter made with Pepsi and deep-fries for 90 seconds in soybean oil. Asked if he enjoys the treat himself, Orme told the Times , “I stay away from fried foods.”

Others have questioned the ban saying it is mainly a publicity stunt. Chris Coffman, who runs a fried dough snack booth at the Indiana Fair, told the Times  the whole thing is silly.

“It’s craziness,” the paper quoted him as saying. “They’re using this for a marketing ploy. It’s a way to convince people that they can eat more—that somehow all of this is safe now and you can eat all you want—when we all know that is not true.”

Coffman has a point. Even when using trans fats free oils, the calories can still mount up. According to one website, CalorieKing.com, the Combo Plate clocks in at a whopping 700 calories. That is more than a third of the entire daily caloric intake for most humans of average weight and activity.

The trans fat debate is a relatively new one and therefore will probably rage for the immediate future. Trans-fat labeling on packaged foods became mandatory on January 1, 2006. That has provided the impetus for those with food concerns to try to eliminate trans fats from their operations and menus. Boston Pizza, one of Canada’s largest pizza chains, announced this year it has completely eliminated all industrially added trans fats from its entire menu to coincide with its annual new menu launch.

In this country, Papa John’s claims they have removed trans fats from all their menu items including all sides. California Pizza Kitchen has removed trans fat from deep-fried foods and is working on eliminating it from all other foods. All of the menu items at CiCi’s Pizza’s 615 restaurants will measure zero trans fat by the end of 2007, the company has promised. Most of CiCi’s pizza toppings and salad dressings already measure zero trans fat, the company said, and CiCi’s is working to adapt the zero trans-fat requirement to its remaining sauces, toppings and desserts.

The fact that your customers order a pizza without, say, pepperoni and made with reduced-fat cheese, doesn’t make it a low-fat food. Many consumers see trans fat-free and assume they can eat thirds if they like.

They are unaware that some fat can be hidden in the crust in the form of partially hydrogenated vegetable oil, a source of trans fat that scientists say is as bad for your heart as saturated fat. Although the amount of trans fat in pizza crust is less than you would find in pastries, the healthiest crust would be one without it. Operators looking to address the health-conscious customer would do well to consider offering pizza crust made from whole wheat, oat bran or wheat germ.

After New York City’s health board banned fats in the Big Apple, the Chicago City Council proposed a ban for its city in July 2006. Pundits in the Windy City thought the legislation was directly traceable to what they deemed suspect research by Harvard University’s Alberto Ascherio and Walter Willett. The two scientists were claimed to be the promoters-in-chief of what ban opponents called,”trans fat fear.” The consensus was, if trans fats are banned now, what would be banned next by the so-called “trans fat police?” The food community in Chicago published the worst case scenarios in blogs and newspaper columns: restaurants could be banned from serving such staples as potatoes, peas, peanuts, beans, lentils, orange juice and grapefruit juice, as Ascherio and Willett once reported increased heart disease risk among consumers of these foods.

Likewise, Indian restaurants could be banned from cooking with sunflower oil. Ascherio and Willett once found that consumers of Indian food cooked in sunflower oil were three times more likely to suffer heart attacks than consumers of Indian food cooked in mustard oil. The pizza industry would be heartened by one of the pair’s declarations: daily consumption of pizza by men could be REQUIRED. Among the many conclusions reached by the research pair, they reported that consuming 10 or more servings of pizza per week reduced men’s risk of prostate cancer by one-third. Chicago pizzeria owners found no fault with this finding.

Health and convenience are the buzzwords driving the global food industry lately according to a recent article in Food Technology magazine, published by the Institute of Food Technologists, a non-profit group of food scientists. One of the top 10 food trends was “low fat,” which regained its place as the most influential food label claim with 63% of consumers chosing products promoted as low fat, while 55% bought foods labeled low in saturated fat. These compared with 40% purchasing items labeled as low carb. The article also pointed out that 71% of consumers most frequently checked food labels for total fat content, compared with 40% checking for total carbs.

And this just in…

Dunkin’ Donuts, the food-on-the-go chain whose name celebrates a treat that’s symbolic of unhealthy eating, is trying to refresh its image by eliminating trans fat across its menu, Homer Simpson be damned. Since October 15, Dunkin’ has been offering more than 50 reformulated menu items—doughnuts included. The Canton, Mass.-based chain says its menu is now “zero grams trans fat” across its 5,400 U.S. restaurants in 34 states. The ice cream chain Baskin-Robbins, another unit of Dunkin’ Brands, plans to be zero grams trans fat by January 1, 2008.