The battle between New York and New Haven pizza has raged for years, with New Haveners insisting that the apizza (pronounced “a-beets”) that comes out of New Haven would win any contest against a New York pie—some even claiming that Italianborn New Haven transplant Frank Pepe invented pizza in America. While the debate will probably never be settled, locals and tourists enjoy benefi ting from the recipes and years of experience passed down from generation to generation (it’s rumored that everyone who currently owns a pizzeria in New Haven is in some way connected to the town’s fi rst pizzeria). In the long history of New Haven’s style of pizza—called apizza by locals and distinguished by its thin crust and charred edges—Modern Apizza (www.modernapizza.com) on State Street is one of the originals, open in the same location since 1934. The beehive-design brick oven measures 12 by 12 feet inside and cooks at high temperatures; the coolest spot in the oven, says owner Bill Pustari, is a searing 700 degrees, so pizzas cook in six to seven minutes. “They’re really difficult to run, really finicky,” says Pustari of the ovens. “But we think they make a better pizza.”

About 80% of the restaurant’s customers are locals and repeat business. “I don’t know ’em all by name,” says Pustari, "but I know ’em by what they eat—that guy’s a small sausage, that guy's a pepperoni. I know ’em like that.”

Pustari also introduced us to the local soda, made in New Haven by Foxon Park Beverages since 1922. We sampled the Gassosa (a 7Up-type beverage) and the popular White Birch (similar to root beer)—a perfect combination with two pies fresh out of the oven: a cheese pie and a pie with sausage, meatball and mushrooms. 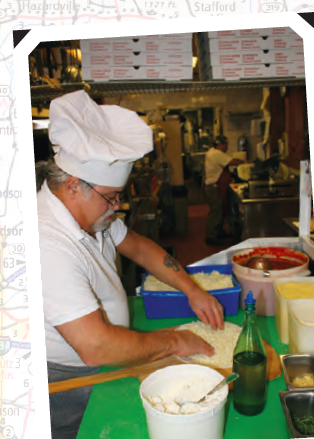 Maybe it’s not one of the oldest pizzerias on Wooster Street, but with someone like Lou Abaté at the helm, Abaté Apizza & Seafood Restaurant (www.abaterestaurant.net) is poised to become a Wooster Street institution. In the pizza business for more than 40 years, Abaté works hard—even living with his wife, Loretta, in an apartment he built above the pizzeria—to fulfill the expectations of a New Haven pizzeria and at the same time set himself apart by offering extras such as delivery, lunchtime hours, a menu to please every palate, and a new service that picks customers up and brings them to the restaurant. 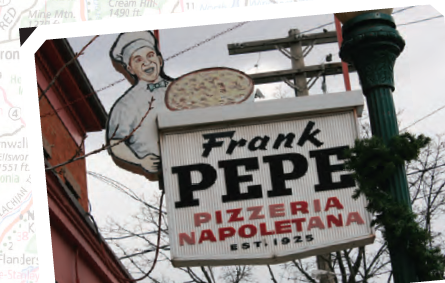 Frank Pepe’s Pizzeria (www.pepespizzeria.com) was born from a simple experiment: A young Frank Pepe worked at a bread bakery on Wooster Street, and one night he decided to flatten out some bread dough, pile on leftovers and bake it in the oven. Voilà! First he hawked his creation from a traveling cart at local markets, selling apizza for 10 cents a slice; later, he bought the bread bakery and opened a pizzeria at 163 Wooster Street, in the heart of New Haven’s Little Italy. Today, that business is in its third generation and still going strong.

“We haven’t changed anything about my grandfather’s recipe,” says Gary Bimonte, grandson of Frank Pepe, pointing out the secret dough techniques, quality tomatoes and fresh garlic used for the pies. “We try to keep it as traditional as possible.” Today, the business is known for its original tomato pie (just sauce) and its fresh clam pie, a characteristic topping of New Haven’s apizza. Additionally, the business has started to satisfy other Connecticut markets, with recent openings in Fairfield and Manchester. “To try to keep Frank Pepe’s legacy, we’re expanding,” says Bimonte.

Frank Pepe’s winning formula is simple yet fundamental: Says Bimonte, “Our family strives to give the best quality product we can at a decent price to keep the people coming back.” And as far as the many spots that now sell apizza—in New Haven and around the country—Bimonte points to an old adage: “They can copy us but can never duplicate us.” 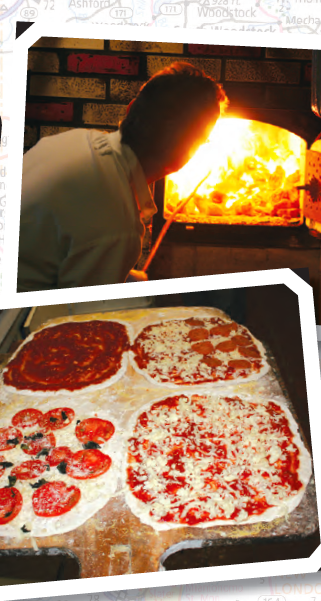 Sal Consiglio opened Sally’s Apizza (www.sallysapizza.net) in 1938, during the Depression, when he couldn’t find a job. He was used to making pizza at home, so he, his mom, two sisters and two brothers set up shop on Wooster Street using the recipe he learned from his uncle, Frank Pepe, and had tailored to suit his own taste. Eventually, he and his wife Flora (better known as Flo) took over the business; when Sal passed, Flo began running the business with her two sons, Bob and Richard, and her daughter, Ruth. Today, the business is run much the same as Sal ran it in the beginning. “Sal always said that you never serve what you wouldn’t eat yourself,” says Flo. “I always check the pizzas before they go out to the customers: if they aren’t right, they get remade.” Nowadays, Bob and Richard run the kitchen, Ruth runs the floor and register, and Flo likes to say that she just “hangs out,” but it’s clear that she does more. “How often does a mother get to hang out with her three children when they’re grown? Not very often,” she says. “I feel I’m very lucky in that respect.”

Rumors of Wooster Street rivalries have circulated for years, but they simply aren’t true, according to Flo. “Not only are we related, but we’re very good friends,” she says. “There may be a rivalry amongst locals, but not amongst the businesses.” Flo’s son Bob, who has worked at Sally’s for 30 years, agrees, saying that everyone is very friendly, even taking time to send food to each other’s restaurants.

Do you want a visit from PMQ’s Pizza Magazine? Drop us a line at editor@pmq.com.