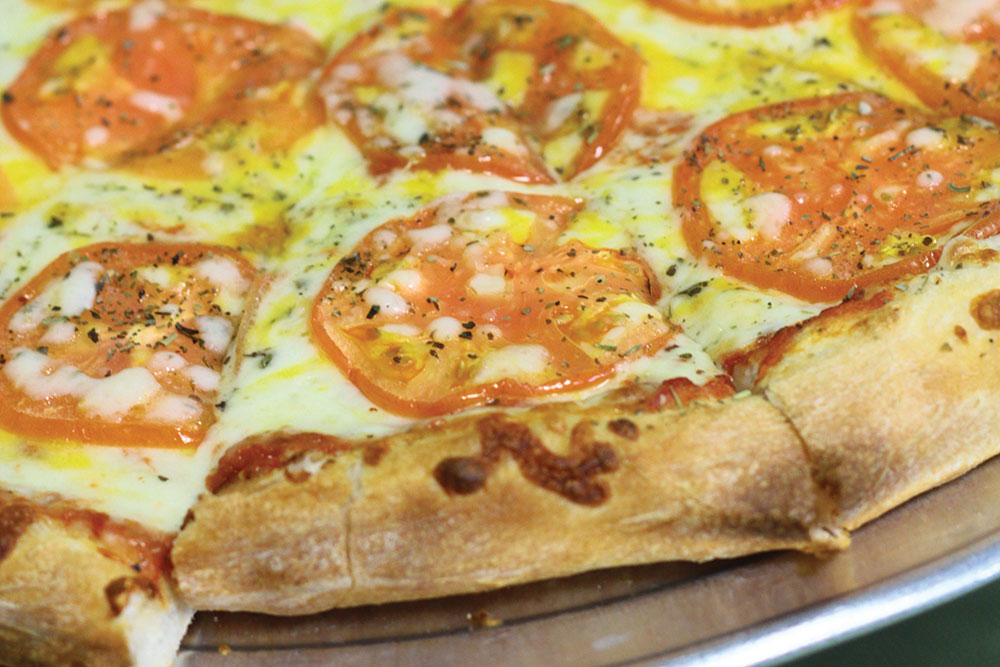 Jane Mines wasn’t even interested in making pizza when her husband, Rick, bought the already established Nima’s Pizza & More (nimaspizza.com) in Gassville, Arkansas, 11 years ago. But, by 2013, nothing could stand in her way, not even a broken-down car on a Friday night in the middle of nowhere.

After participating in various pizza making competitions for several years, the couple loaded up their dough and pizza ingredients and began the long drive from Gassville to Las Vegas for the U.S Pizza Team’s (USPT) American Pizza Championship at the International Baking Industry Exposition last October. But the couple hadn’t made it far when their car broke down in a small, dusty town in Oklahoma.

Unable to find a mechanic or rent a car that could be taken out of state, the Mines considered their options: Miss the pizza making contest or spend a wad of cash on a new vehicle. For this pair of passionate pizza makers, it wasn’t a difficult decision: They took the plunge and bought a new set of wheels—a convertible, no less. They hurriedly packed up the new car and made it all the way to Vegas. Unfortunately, the dough did not thrive during the delay, but Jane competed anyway, despite the blown-out dough. “I knew we weren’t going to win with that dough, but I still wanted to compete,” she says.

Once shy and resistant to the notion of slaving over a hot pizza oven, Jane blossomed in the family-owned pizzeria—located in the heart of the Ozark Mountains near a prime trout fishing area—and is now a force to be reckoned with on the culinary competition scene. But she doesn’t compete simply to win; for her, it’s also about getting to know other pizza chefs and keeping up with the latest industry trends. Also, as a woman, Mines wants to support other female competitors, since there are so few of them, she notes.

Back home, she has the same nurturing attitude toward her pizzeria. “It’s a family atmosphere,” Jane says. “We are so close to the customers.” She waves her hand toward a seat near the cashier’s station, which faces the pizza oven and prep table. “We’ve got the famous viewing seat here by the counter, and we just stop and chat with them. So many stores keep their cooking area and customer area separate. For us, it’s about the interaction, although it may not be a long conversation because you are trying to rotate the pizzas.”

Since the Mines make it a point to publicize their performances in pizza competitions, customers come in and inquire about the upcoming contests and make sure to try the new pies. “They are part of it,” Rick says. “Get it out there—get your customers to be part of the competition by testing new pies with them.”

The Mines have plenty to brag about. When Rick first signed them up for a competition in 2008, he figured his wife would be mad at him. He thought the risk was worth it—even if they lost, they’d learn from other great pizza makers. By 2010, they were racking up first-place prizes as well as local and regional awards and even earned coverage on The Food Channel.

They also recently became affiliate members of the USPT, an investment that has yielded returns by drawing media attention to their store. The Mines will compete with the USPT at the World Pizza Championships in Italy this month, and, to build excitement, they teamed up with a PR firm to hold a special pizza tasting event for 25 members of the news media at their shop in Gassville a few months ago. In addition to regional newspapers and magazines, the event attracted reporters from USA Today and Entrepreneur. The journalists piled into the restaurant to taste various artisan pizzas created by the Mines and to learn more about the USPT. The Mines worked with area and state tourism offices to organize and promote the event. Since then, customers have been stopping in to receive updates on their travel plans, offering to help sponsor their trips and generally rallying behind the couple and their pizzeria.

Jane has also made a name for herself with her desserts, baking pastries and taking part in cupcake competitions. Using her grandmother’s recipes, Jane sells hundreds of pastries each day at Nima’s. The best part of adding the new baking component was the fact that the only additional equipment required was a new convection oven, she says. Her cream puffs are especially popular, and Nima’s is the only place that offers them in Gassville. “Dessert has come a long way,” she says. “People come in now just to buy pastries. It brings in new customers for us. They buy baked goods and then smell the pizza and come in again for that.”

A Sense of Belonging

For Jane, the USPT membership is also about her devotion to the pizza making craft. She strives to make each pizza a unique—and wonderfully edible—work of art. But it was the camaraderie at the American Pizza Championship event that really won her over and persuaded her to join the USPT. Jane spent much of her time encouraging other team members, and the jovial atmosphere gave her a sense of belonging with the team. “It is unique to compete with the USPT,” she says. “The team is going to be my baby.”

Jane says she was the only female competitor in her first event in 2008 and that most people thought she was assisting her husband rather than competing alongside him. Today, her fellow pizza makers take notice when Jane enters competitions. She feels that she and Leah Scurto from the Pizza My Heart (pizzamyheart.com) chain in California led the way for other women to begin competing. Today, the female ranks have grown, including Heather Zook of Sinfully Gluten-Free (sinfullygf.com) in Centerville, Ohio, who recently won the American Pizza Championship for the first time.

While the Mines have won regional and national pie making competitions, they will compete in Italy this month for the first time. The World Pizza Championship will feature more than 300 pizza chefs from 32 countries in culinary and acrobatic contests. Rick says he looks forward to participating in what he describes as “the Olympics of pizza.” For her part, Jane has been preparing for the big showdown by watching footage of previous competitions and plans to observe her rivals closely—and learn from them—while in Italy. The Mines have already begun reworking their recipes, hoping to hit upon the perfect pie to win over the Italian judges. “I’m so excited to be part of the U.S. Pizza Team,” Jane says. “And I’m especially excited to get my pizzas in front of Italian judges.”

Meanwhile, Rick says he and his wife will continue to serve up the best pies they can make for their hometown customers and friends. “Our goal is to have the best food at the best value, and it is our responsibility to make that happen,” he says. “We look at everything in small numbers. If you take care of the pennies, the dollars take care of themselves.”