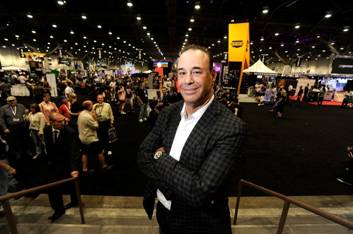 Las Vegas – The industry’s most important bar, beverage, nightclub, restaurant and hospitality event of the year, the Nightclub & Bar Show, is making its mark once again, returning to the Las Vegas Convention CenterMarch 24 – 26. Throughout the show, industry professionals will be educated and entertained during what is being dubbed the greatest conference and nightlife program in the show’s 28-year history.

“This is an opportunity for bar, beverage and nightlife industry professionals to gain incredible amounts of knowledge while learning about the newest and best parts of our industry, all in the greatest environment in the world,” said Jon Taffer, Nightclub & Bar Media Group president and Spike TV’s “Bar Rescue” host and executive producer. “Bottom line: if you’re in our business and you’re not there, you need to find another line of work.”

More than 70 moneymaking seminars, four in-depth workshops and three powerful keynotes, with an introduction by Taffer, are included in the show’s lineup. The 2014 show’s historic lineup also features several “Bar Rescue”-recommended sessions, including:

·         Bar Rescue: Where Are They Now? moderated by Thom Greco, owner of Greco Holdings, Inc. and a panel of previously ‘rescued’ owners.

·         Going Above and Beyond Behind the Bar with Russell Davis, expert, Spike TV’s “Bar Rescue” and president of Unlimited Liabilities.

The top convention in the nightlife industry wouldn’t do any true justice without a premier lineup of events for those who want to celebrate once business on the trade show floor is complete each day. With premier entertainment and celebrity hosts, Nightclub & Bar Show attendees will be treated to the most exhilarating nightlife yet.

·         Plus, all-new Nightlife Pass with more surprise entertainment to be announced.

New cocktail-driven aspects within the show will provide depth and variety to the business-centric event. For the first time at the show and in Las Vegas is the Craft Spirits Awards International Competition, where a blind taste test to determine bronze, silver and gold medal-winning spirits will be judged on-site with the winners also announced at the trade show on Tuesday, March 25. Also not to be missed is the Shake It Up Competition, planned in partnership for the first time ever with the United States Bartenders’ Guildto highlight up-and-coming mixologists who will be asked to demonstrate skill, flair and creative concoctions while being judged by a panel of the nation’s leading mixologists.

Attendees are encouraged to purchase trade show passes prior to Jan. 31 to take advantage of the early bird offer at www.ncbshow.com. The trade show offers a variety of passes for attendees to customize their experience. The packages range from the Taffer-recommended VIP Pass ($579*), which grants access to all areas of the trade show and nightlife celebrations, to the basic Expo Pass ($99*).