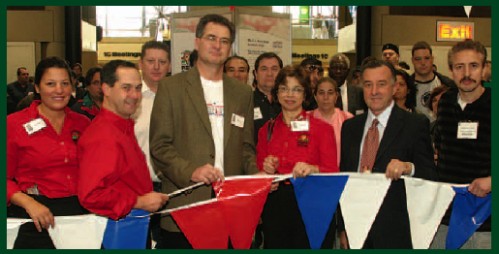 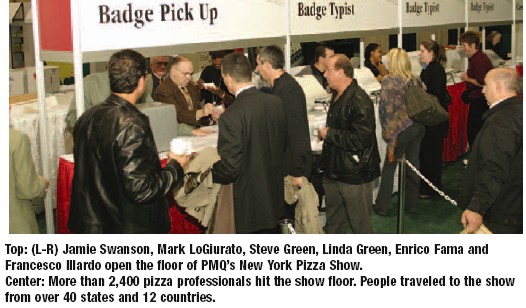 You did it! You helped make PMQ’s inaugural New York Pizza Show an astounding success.

The entire PMQ and Infinity staff was there meeting with pizza operators who had traveled from as far away as Alaska and Singapore. More than 2,400 pizza professionals from 40 states and 12 countries attended the two-day event at the Jacob K. Javits Convention Center, Nov. 2nd and 3rd making this pizza show the biggest and best on the East Coast. From the 20 educational seminars, to the display of new products and ideas, and competitions for the America’s Plate and the U.S. Pizza Team, the first-ever New York Pizza Show was considered a resounding success by pizzeria operators and exhibitors alike.

Attendees were attracted by exhibitors representing pizza industry suppliers large and small, from oven manufacturers, dough suppliers and imprinted premium companies, down to an exhibitor ready to personally record a pizzeria’s new radio jingle. The event was the first industry show produced by pizza experts for pizza operators, focusing exclusively on products and services that promised to help pizzaioli make lots of dough – both the green and white kind.

Media response to the New York show was impressive; especially considering it coincided with Election Day, the biggest news day of 2004. Nonetheless, U.S. Pizza Team members appeared on both ABC Good Morning America, and the CBS Early Show. There was a half-page story about the show in the New York Daily News, and the syndicated Life & Style television program featured U.S. Pizza Team members, along with Chef Bruno Santo showing the world how to make pizza with a handle on Nov. 19. Also attending were reporters from the entertainment guide Time Out New York, the New York Times, Nation’s Restaurant News and the New York Post. 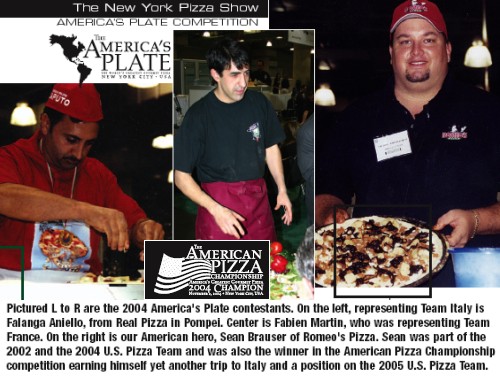 Winner of the U.S. Pizza Team Acrobatic Finals was Juan Hermosillo, of La Cos La Cocina De Isabel of Costa Mesa, Calif. Hermosillo will go on to represent the U.S. in world competition in Salsomaggiore, Italy. Juan’s routine included over four minutes of dough tossing that incorporated handstands and even a segment where he balanced himself standing on one foot atop a wine bottle while spinning dough. Brian Edler swept up titles in the Largest Dough Stretch and the Fastest Pizza Maker. Edler, a two-time U.S. Pizza Team member, owns four Domino's franchises in Ohio and Iowa. Brian already has some World Pizza Championship hardware on display in his shop. In 2003 he won the Bronze Medal in dough stretching and plans on adding more accolades to his trophy case in March.

The America’s Plate, a first-ever event honoring the world’s best gourmet pizza, was won by Andy Parisi’s team from Australia, which sliced past teams from the U.S., Italy and France. Andy’s story is quite inspiring. To be eligible to compete in the America’s Plate competition in New York, contestants had to win a sanctioned event in their home countries. In Australia, Caboolture Cheese sponsored state finals and had all of the winners compete in Melbourne in September to see who would represent their country in New York. Andy first shunned the event and didn’t enter, but his daughter secretly registered him for the state competition in his area. He won and went on to win again at the national finals. After he came to New York and captured the America’s Plate trophy, he returned to Australia a hero. The newspapers and media have since been swarming him and teammate Theo Kalogeracos, who was the winner in Caboolture’s Best of the Best competition last year.

“Those at Caboolture had a dream that this competition could one day turn into an international event to find the world’s best pizza chef, but they didn’t think that it would be so soon,” said Livia McRobert of Dairy Farmers.

The New York Pizza Show, which at times featured the entertaining sounds of the Tarantella and Tony Modica’s Pizza Dance, is expected to figure highly in Cat Price Production’s independent documentary, The Pizza Movie, about pizza and the pizza industry scheduled for release in 2005 (www.thepizzamovie.com). Two video crews covered the trade show on both days, as well as the evening tours of John’s Pizza on Bleeker Street, Lombardi’s and Totonno’s.

“New York is the ancestral home of pizza in the U.S., so it was only natural that a trade show supporting the $30 billion pizza industry would do so well in the Big Apple,” said PMQ editor-in-chief Tom Boyles. “New York is richly steeped in pizza heritage.  We expect that traveling to New York for the Pizza Show will now become a new industry tradition…the tradition has begun.” 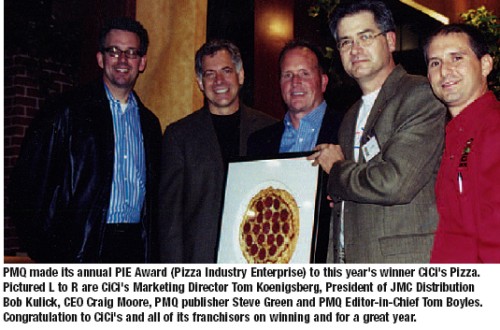 The Forefathers of American Pizza

It was probably the first time in history that so many of the forefathers of American Pizza were all in the same room together. Owners and representatives from Lombardi’s, Totonno’s, Arturo’s, Di Fara’s and Patsy’s gathered at the show for a once-in-a-lifetime photo. Those present included: John Brescio, current owner of Lombardi (the first pizzeria in America); Domenic DiMarco and family, owner of DiFara’s in Brooklyn; John Brecevich and Frank Brija, owners of the original Patsy’s Pizza in Harlem, Betty and Lisa of Arturo’s in the Village (Betty and Lisa are the wife and daughter of Arturo, who was unable to attend.); Larry Goldberg and David Pleger, owners of Totonno’s on the upper East Side.

“It brought chill bumps to see all of these guys together for the first time in history,” Tom Boyles said. “As far as American pizza history, this was an amazing site to see. There were the owners from Lombardi’s, Totonno’s, Patsy’s DiFara’s and others standing around talking. Those guys have never been in the same room together and the New York Pizza Show brought them together.

“The most amazing thing I saw was Domenic DiMarco. He is about 63 years old and is the only one who makes pizza at DiFara’s…and he does it for over 12 hours a day, seven days a week. It took quite a bit of persuasion and a driver to get him there. He said he had to leave as soon as the photos were over to open the shop. When the pictures were taken, I turned to tell him the car was waiting and he took off down the aisle. I caught up and asked if he was ready to go. He turned to his daughter and said, ‘I can get back late and open the shop around 12:30.’ He was like a kid in a candy store, walking around looking at all of the pizza-related exhibitors. Later, as we walked out I asked when the last time he opened late…he said it was over eight years ago when he broke his ankle and had to get x-rays. He said he opened at noon that day! This just shows how the New York Pizza show has new things they can show the most experienced pizzeria owner… Domenic walked out with his daughter carrying an armload of new stuff he bought.” 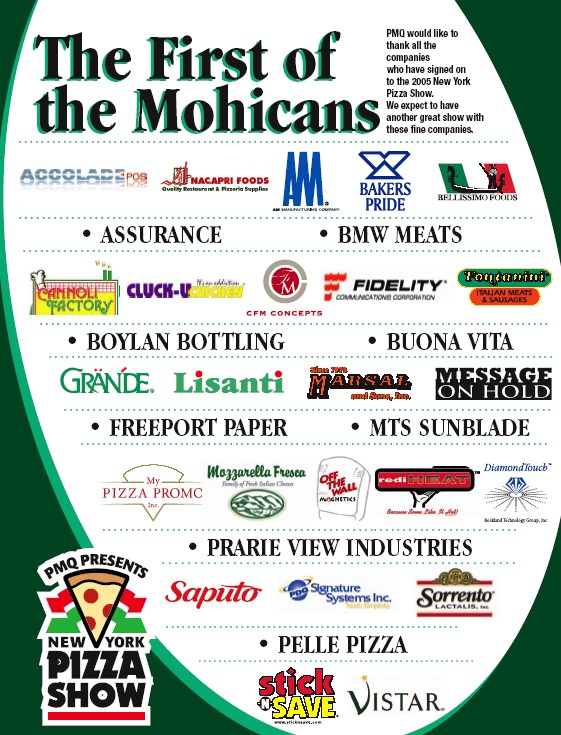