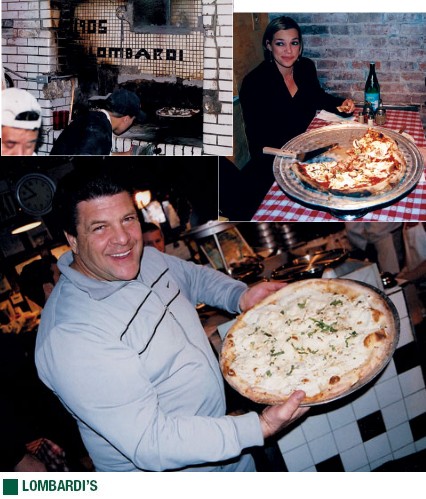 According to documented history, Lombardi's was the first American pizzeria. Pizza didn't gain its popularity until just after World War II, but Lombardi's, opened by Gennaro Lombardi, began selling pizza in New York City in 1905, so you might say Gennaro is the father of American pizza. Lombardi's was originally a grocery, but it soon became a popular stop for workers looking for something to take to work for lunch. Gennaro started selling cheese pies, which were wrapped in paper and tied with a string, and the many workers of Italian descent would take them to the job site. Gennaro's son, John, took over after Genarro passed away and the business eventually went to Genarro's grandson, Jerry. Over the years, Lombardi's continued to sell pizza, becoming a cult-like Mecca for pizza enthusiasts. In 1984, Lombardi's closed its doors. In 1994, John Brescio, who was a childhood friend of Gennaro's grandson, Jerry, started talking to Jerry about reopening Lombardi's and in that same year they did, but not in the same location. They moved a block down the street to 32 Spring Street. 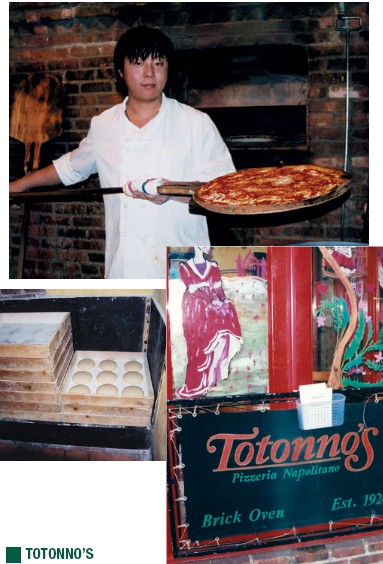 Anthony Pero got his start at Lombardi’s, but left in 1924 to open Totonno's Pizzeria in Coney Island. Anthony Pero and Gennaro were friends in Naples, where Anthony was a baker. Back then, Anthony only made so much dough for the day. When it was gone, that was it. Ask any of the old taxi drivers who the Pizza Nazi was…it was Anthony. Because the ovens cook so fast, you get some small burn spots on the bottom of the crust. That's New York pizza, but if a customer would come up to the counter and say something, Anthony would take the pizza from them and tell them to get out because he had plenty of people who wanted it. The original Totonno's location in Coney Island only sells pizza and drinks. The new location offers pastas, salads, entrées and appetizers. 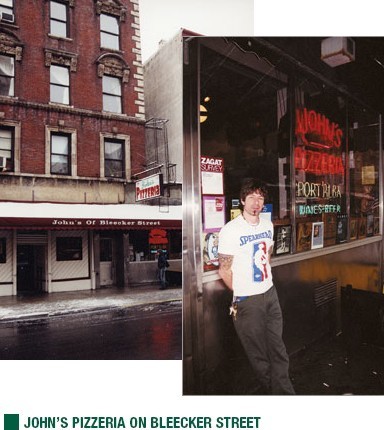 In the heart of Greenwich Village, between 6th and 7th Avenues, you’ll find Bleecker Street. Back in the 1920s and 1930s it was home for many Italian immigrants. From 14th Street to the bridge, it was a family-oriented area. In 1929, John Sasso was working at Lombardi’s Pizza on Spring Street. In 1929, John decided to strike out on his own and open his own place, which can still be found on Bleecker Street. John’s was around from the beginning and the torch has been passed from one family member to another. What a time to open. It was the middle of the Depression. John came here from Lombardi’s and ran the place until about 1953. Back in those years, Bleecker Street was lined with vendors and their pushcarts. It was a great thing and they still try to keep that same family-oriented atmosphere at John’s. 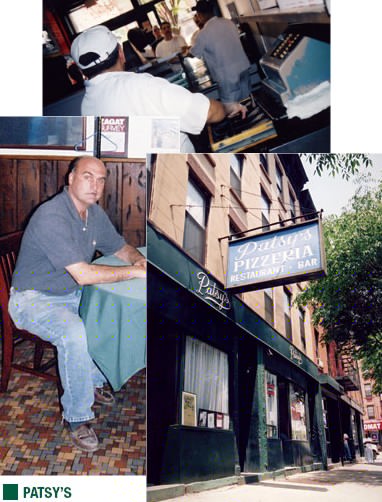 Patsy and Carmella Lanceri married in 1932 and opened Patsy’s in 1933. The history of Patsy’s is the history of New York. In 1933, Prohibition ended, and Patsy decided to open a bar/pizzeria/clam house. Carmella said “okay” and they rented the spot for $40 a month. Patsy was originally a pastry chef. They put in a brick oven and as they purchased the adjacent buildings and expanded, they would cut a hole in the wall and move the oven. Patsy and Carmella lived upstairs until partners John Brecevich and Frank Brija bought the place. Patsy passed away in 1974. Even after they bought the place in 1990, Carmella would still come in every two weeks to make sure everything was being done the way she used to do it. She was very happy…it was still the same guys cooking in the kitchen. The guy back there now has been here for over 25 years. 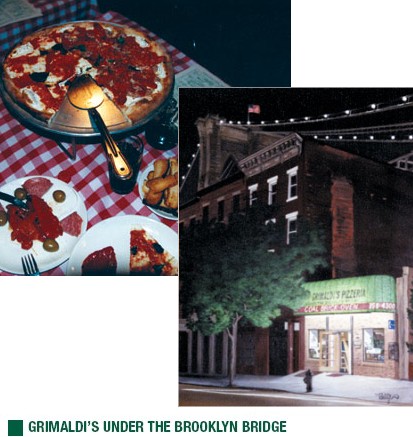 Patsy Grimaldi started Grimaldi’s Pizza in 1990. While it may not seem like one of the landmark pizzerias by it’s age, its owner gives it its legendary status. Patsy Grimaldi, who is now 71, started making pies at his uncle Patsy Lanceri's restaurant  (Patsy’s) in 1941 at the age of 10. Patsy Grimaldi is still alive today and can occasionally be found sitting around Grimaldi’s. “I worked in my uncle’s restaurant until about 1953, when I went into the service,” Patsy says. “I came out and went back to work for my uncle until about 1974, which is when he died. When that happened, I went to work at another restaurant right around the corner from where Grimaldi’s is now. I learned the right way to make pizza at my uncle’s,” Patsy says. “The correct way…the only way. Some of my most memorable experiences there were meeting all of the famous people who would come through. People like Joe DiMaggio, Humphrey Bogart, Lauren Bacall. It was there I met Frank. Those were nice memories…good times.” The Frank he is speaking of is none other than Old Blue Eyes, Frank Sinatra. 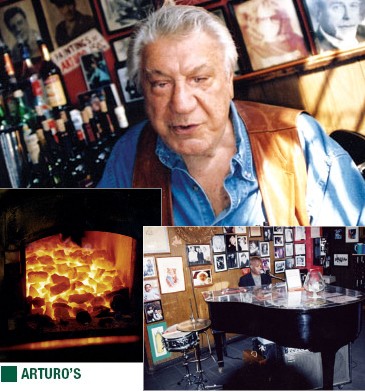 It all started back in 1950. One of the Patrillo brothers of Frank’s Pizzeria saw a young guy leaning against a building. Frank was the son-in-law of John Sasso who opened John’s Pizza on Bleecker Street. “You wanna work for me as a waiter?” he asked the guy. “I don’t know anything about waiting no tables,” the guy responded. “I’ll teach ya. Come in tomorrow at five and wear a white shirt and black pants.” Six years later, this young guy opened Arturo’s Pizzeria.        “When I decided to open my own place, I had no money,” Arturo says. “In 1957, I took $4,000 and started a business. I borrowed $1,000 from my mother-in-law, $1,000 from my aunt, $1,000 from my sister and I had $1,000.” Arturo’s is one of those places that seems to attract a unique blend of people. Adorning the walls are countless photos of people like Tony Bennett, mayors, actors and other celebrities. “I’m into food and music,” Arturo says. “We have jazz every night…it’s unbelievable. I don’t know which attracts more people, the music or the food, but I think it’s about the same.” 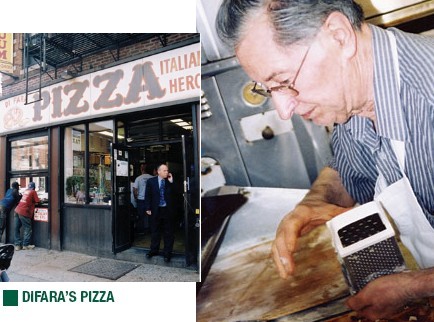 The inside is about as basic as any place could be. There are about three or four plain, wooden tables and chairs and a counter with a small table and oven behind it in the front corner. Behind the counter in the front corner is a window that opens up to the sidewalk. A couple of herbs are growing in the window. The owner is Domenico DiMarco (Domenic to everyone who knows him) and the pizzeria is DiFara’s Pizza. Domenic came to the U.S. in 1959 at the age of 23. Back in Italy, he was a farmer, but moved to the U.S. with his brother because he said Italy was no good after the war. Domenic is the only person you see out front. He is a one-man operation and everyone who comes in is on his time schedule. You come to love the wait and watch a way of business that has long been forgotten in the hustle and bustle of everyday life. You walk in DiFara’s and you walk into a time warp…you are in Domenic’s world and on his time…you eat when he is ready for you to eat. 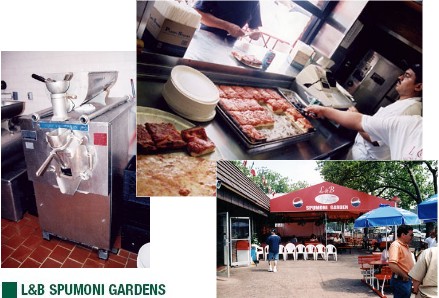 L&B got its start back in 1939 when Ludovico Barbati (that’s where the L&B came from) came to the U.S. with an idea for selling spumoni. He started out with a small horse-drawn carriage from which he sold the cool, creamy treat. He had three sons, two of whom went into military service. As each one returned from service, a section was added to the business and they went to work with their father. The original house that everyone grew up in was located directly behind the restaurant. “We all grew up here,” Louie Barbati says. “Everyone would walk out of the house right into work. My grandfather built a business around his life, or vice-versa. We used to store all of our ingredients in his garage. It started out as just a spumoni business, but when my uncle came out of the service they added the pizzeria and then the restaurant.” From one generation to the next, L&B Spumoni Gardens has remained a family tradition. According to several family members, there are several great-grandchildren poised to take over in the years to come. 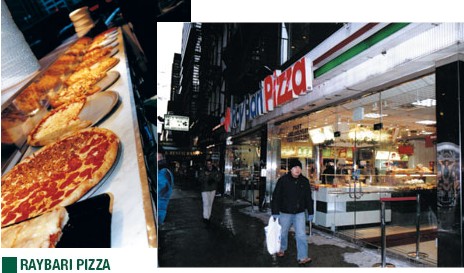 If you are in New York City and ask 10 different people where Ray’s Pizza is, you will probably get 10 different answers. You have Ray’s Pizza, Famous Ray’s, World Famous Ray’s Pizza, The Original Ray’s Pizza, The Original World Famous Ray’s, RayBari Pizza and even one named Not Ray’s Pizza. Why are there so many Ray’s in New York? In the 1970s, there was a pizzeria named Ray’s that gained much popularity in NYC. So much, that others wanted to jump in on the action, so there were several variations of the name used. No one really knows who was the first, who was the best or who really owned the name, but three saavy New York pizzeria owners, who happened to have pizzerias named Ray’s in some form or fashion, decided to join forces and trademark the name. With their trademarked name, they attempted to eliminate the use of Ray’s by every other pizzeria in the city. But one pizzeria stood up and fought back…RayBari. Rather than cave in to the conglomerate’s demands, the guys at RayBari, who had built their own reputation as one of New York’s best pizzerias, chose to make Ray Bari one word (RayBari), create a logo that incorporated the name and the New York skyline and continue doing what they had always done, which is make great New York pizza. They won their fight and are now as famous (no pun intended) in New York as Joe DiMaggio. 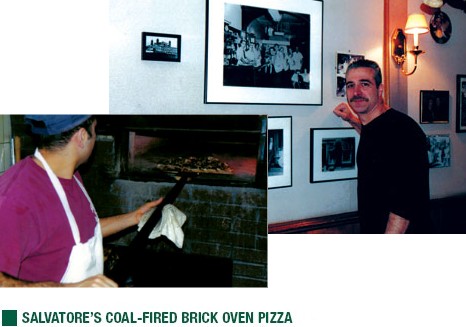 When I met up with Fred Lacagnina, we sat down and he told me his story. Back in 1929, his grandmother’s brother opened a pizzeria in Harlem (Patsy’s). I asked Fred if there was anything about Patsy and his restaurant that he brought in to his restaurant. He said it was passion. “A restaurant is a place to come and relax, eat and have social interaction,” Fred explained. “Don’t get in the business for money or fame, get in it because it is what you love. My best advice is to put quality food on the table, have great service and be clean. If you have those three things, it will be hard to fail. My uncle was in an old building with a tin ceiling and original wood floors, but he had those three things in place and was a success. Concentrate on what’s important. After my aunt sold Patsy’s, she would come in and sit in the corner. It made me feel good to have her come in here and see what she and my uncle had started. Of course, I was always worried that what I was doing wouldn’t meet up to her standards, but I think she approves.”