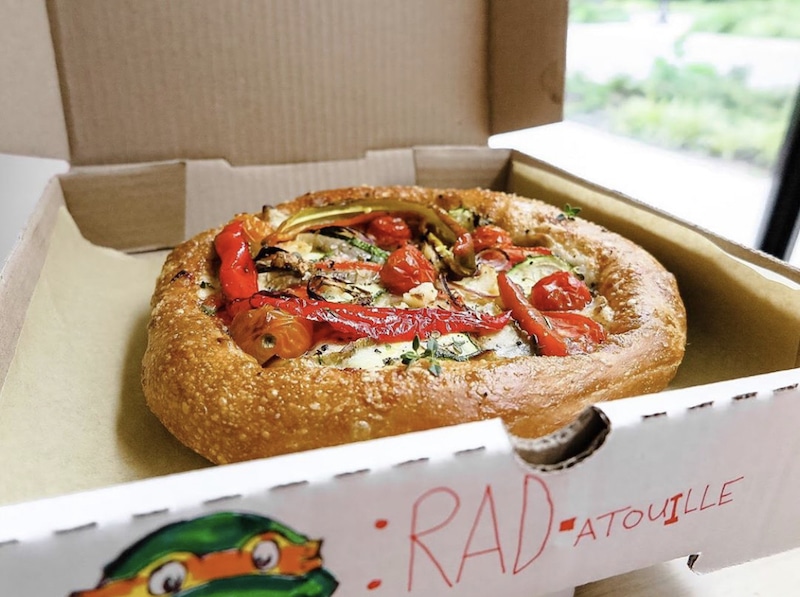 Oyster Oyster, a new hip and hyperlocal, plant-forward restaurant in Washington, D.C., has been going with the flow since the pandemic postponed its grand opening in late winter—and now they’re working pizza and “Teenage Mutant Ninja Turtles” lore (TMNT) into their mix.

As The Washingtonian reports, Rob Rubba and Max Kuller originally intended to launch the environmentally friendly Oyster Oyster just before the coronavirus began its rampage. They finally opened last month as a takeout-only operation, providing dinners-to-go five days a week (Wednesday-Sunday). The menu varies according to what’s in season and depends heavily on the region’s local small farms and producers.

Related: How pizzerias can appeal to the growing vegetarian/vegan market

Washington, D.C. is presently in Phase 2 of its restaurant reopening process, allowing dine-in at 50-percent capacity. But Oyster Oyster’s owners aren’t ready to seat customers in their main dining area just yet. Instead, they’ve added Oyster Garage, a new party room in the parking area next to the building. Oyster Garage serves groups of up to six people, and the parties center around vegetarian/vegan pizza made with sustainably and responsibly sourced ingredients, plus oysters, wine and beer.

Oyster Garage offers a $400 package that includes four TMNT-inspired “cowabunga” pizzas, four dozen oysters with seasonal mignonette, four bottles of wine or pitchers of beer, and a chance to show off your wizard skills on a pair of free pinball machines.

“I like looking back as you’re moving forward,” Rubba, the Oyster Oyster chef, told the Washingtonian. “I’ve been working on a dough that’s a little thicker as a crust that reminded me of the personal pan pizzas—really nice, buttery.”

Rubba makes his dough using local grains—specifically organic hard-winter wheat flour from Small Valley Mills in Pennsylvania, reports DC.Eater.com. “Thick and pillowy when it comes out of the oven, the circular crust balances an assortment of roasted okra, tomatoes, onions and chiles with a pepper paste,” DC.Eater.com explains.

One pie, called the Leonardo in honor of one of the famed ninja turtles, comes topped with foraged Indigo mushrooms, a sunflower-garlic cream and herb salsa verde.

In one of the many recent articles covering Oyster Oyster, Kuller told DCist that he began experimenting with oysters in recent years because they are “non-sentient beings” and oyster farming has been shown to be good for local waterways. He noted that he and Rubba position Oyster Oyster as a “plant-forward” restaurant rather than vegetarian. “Our philosophy isn’t just about vegetables,” he told DCist. “It’s about stewardship, from the business practices of vineyard partners to compostable takeout boxes to cocktails using scraps from cooking. ”