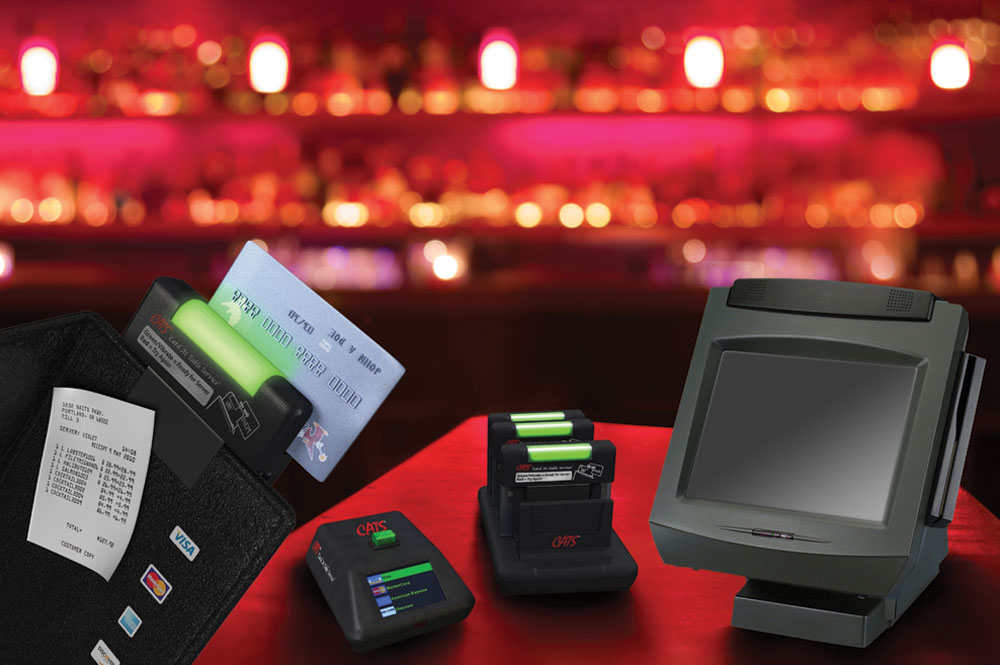 There aren’t many places where a customer would hand over his credit card to a complete stranger and lose sight of it for several minutes, but this transaction is routine at restaurants. Most consumers don’t give it much thought, but as identity theft becomes more commonplace and more lives are ruined every day by scam artists with pilfered credit card numbers, some technology companies have begun offering alternatives that allow restaurant guests to pay for their meals without having to surrender their plastic to a stranger.

“We call it the security gap that exists between the table and the POS system—the gap during which the card is out of your sight,” says Tom Harpootlian, chief operating officer for TablePay of America, based in Flint, Michigan. For many credit card users as well as for the banks that issue the cards, this gap has become increasingly worrisome, creating opportunities for credit card fraud and ID theft at every turn. The New York Times reported in 2011 on a ring of seven waiters charged with stealing data from the credit cards of at least 50 diners at upscale restaurants like Capital Grille, Smith & Wollensky and Wolfgang’s Steakhouse. Another alleged criminal ring of restaurant-based “skimmers” was uncovered in Orlando earlier this year, according to The Orlando Sentinel.

That’s why pay-at-table credit card processing—which has been used in Europe for the past decade—has recently begun to make inroads among U.S. eateries. “The biggest thing is security,” Harpootlian says. “Forty-four percent of all credit card fraud originates in the food and beverage industry. With pay-at-table options, customers appreciate the security of never handing their credit card over to a waitstaff person. It literally never leaves their hands, dramatically reducing the risk of credit card fraud.” Harpootlian adds that the waitstaff loves it because they can’t be accused of stealing someone’s card—and, from an image standpoint, it shows that the pizzeria is concerned about the security of its customers’ data and that it’s up-to-date with the latest technology.

Robert Seward, vice president of product management at PayAnywhere in Buffalo, New York, agrees. “The two biggest benefits to offering pay-at-table service are speed and security,” he says. “Speed is a big one since the quicker you can turn a table, the more customers you can fit into the day. Servers benefit from the time savings and get the opportunity to share a cutting-edge technology with their customers. It’s a win-win.”

“This technology is not designed to replace servers altogether, but it could save servers a lot of time so they can serve more tables in a set time period.”   —Robert Seward, PayAnywhere

There are several types of hardware and software configurations for pay-at-table service on today’s market, most of which can be integrated into a restaurant’s existing POS system. One small device—a smart magnetic card reader that’s less than three square inches and ½” thick—clips onto the top of the bill portfolio. “The customer swipes the card on the reader, and it turns green to show you are done, letting the waiter know it’s ready to be processed,” Harpootlian says.

Such devices can be plugged into any standard POS system with a USB cable, and the system will sense the device as a card reader (or swiper). “I could walk into any restaurant with any POS station, plug one of these devices in and run a transaction in about 10 seconds,” Harpootlian adds. “There are no changes, no programming, and no cost to have the POS supplier update the system—just plug it in, and it works. Nothing has to get changed in the POS system or credit card processing process.”

Once a customer has swiped his credit card to make a payment, the server takes the card reader to the POS station and places it within ½” of the docking station. Via wireless communication, all of the information from the transaction is automatically transferred from the card reader to the docking station. Immediately afterward, the credit card information gets automatically erased from the reader but remains stored in the POS system until it’s switched to credit card authorization mode. Once the payment has been processed, the server returns to the customer with printed receipts, and the customer adds the tip.

Basic pay-at-table systems don’t calculate tips, but one reader will store up to four credit card numbers for those customers who want to split the tab. Alternatively, the server can bring multiple card readers to the table, allowing each party to swipe his credit card and get a separate receipt. A basic system of this type may cost about $1,500 for five card readers, with volume discounts available and no monthly fees. Experts recommend about five card readers for each POS, and the readers can be stacked on a charging station, five at a time. Each charge is good for about 150 transactions, but storing the readers on the charging station between uses keeps them juiced up, clean and organized.

Easy as a Phone Call

Another mobile payment system works with the customer’s mobile device, such as an iPhone, iPad, Android phone, tablet or Blackberry. This system can be used strictly to process credit card payments, or it can also be customized to display menu information, Seward notes.

In this case, the credit card reader can be plugged directly into the customer’s mobile device, and, once the app has been downloaded, guests can handle their own payments, Seward notes. “The app allows customers to check out simply and securely by swiping their credit or debit card through the reader and signing their names with their fingers directly on the device. An electronic receipt is generated and can be emailed to the customer, or the restaurant can pair the payment solution with a mobile receipt printer and deliver a paper receipt to customers on the spot.”

Prevention of fraud and identity theft is only one advantage provided by these technologies, Seward notes. “With the ability to pay at the table, you eliminate the often arduous process of having the server leave the bill at the table, circle back in a few minutes to collect the payment source, go back to the POS device and punch in the payment info, generate a paper receipt, and then bring the paper receipt back to the table, wait for it to be signed, and finally enter a tip in later if appropriate,” he says. “With pay-at-table, checkout is streamlined and put into the hands of the customer. Faster customer service is realized without customers  feeling rushed. They check out at their own pace, and no one is left waiting.”

If a restaurant already uses iPads or iPhones, the initial investment for this type of system could be zero. Some companies offer the app and the card reader for free and use a pay-as-you-go pricing model with a transaction fee, generally in the range of 2% to 3% per swipe, instead of a monthly fee. “If you don’t already own a tablet or smartphone, you can purchase one from a local retailer,” Seward says. “Pricing for an off-the-shelf tablet varies depending on the features selected, but it can start as low as $100. Then you can be off and running, offering pay-at-table checkout.”

“The biggest thing is security. Forty-four percent of all credit card fraud originates in the food and beverage industry.”    —Tom Harpootlian, Table Pay of America

Some systems offer more than just a convenient and secure payment option. UNO Chicago Grill (unos.com) in Wrentham, Massachusetts, uses the Ziosk system for both mobile payment service and digital entertainment. Placed at each table in the restaurant, the 7” touchscreen system lets guests order menu items, play games, watch videos and engage with social media. But UNO takes it even further than that, allowing patrons to access nutritional information about the restaurant’s menu items through the system. “Basically, it’s a tool to help us give the best service possible,” says manager Min Lee. “Guests can interact, refill drinks, order appetizers and desserts and even read the newspaper for free.”

The system is PCI-compliant, comes with a tip calculator and check splitter, and allows customers to receive receipts by email or print. Lee says the system helps with upselling and speeds up customer service. “Our food quality and service is one of the highest out there, but the Ziosk takes it to the next level,” he says. “It helps improve our image as a whole.”

Multimedia pay-at-table systems are beginning to catch on in the restaurant industry, says Shawn Gentry, COO and president of Dallas-based TableTop Media, the maker of Ziosk. “Despite the current economic environment, national chains are exploring this technology across all category segments,” he says.

Pay-at-table solutions can help turn tables more quickly, thereby potentially increasing profits, but could they also reduce or even eliminate the need for waitstaff in the future? Seward doesn’t think so—at least not yet. “This technology, as it stands today, is not designed to replace servers altogether, but it could save servers a whole lot of time so that they can serve more tables in a set time period,” he notes. “Tablet solutions can also improve the ordering process to add or delete condiments, side orders and toppings.” In other words, most of these technologies are designed to make servers’ jobs easier rather than eliminate them. 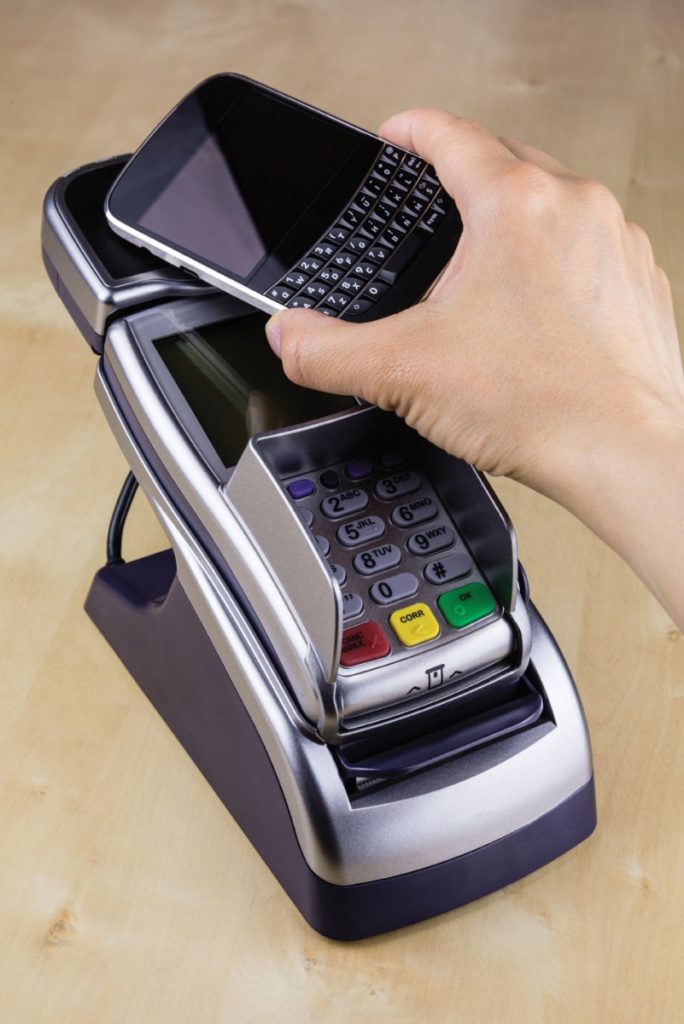 As the technology evolves, pay-at-table systems will continue to enhance and improve the guest experience, Seward predicts. “Consider a server with a handheld tablet being able to explain the ingredients and calories for a menu item to the health-conscious guest or a fine-dining restaurant being able to pair its wine inventory to the meal chosen,” he says.

Above all, though, mobile payment helps protect customers’ credit card information, which, for today’s high-tech crooks, is as good as gold. “Not only is ID theft and credit card fraud a negative for customers; it’s also bad for restaurant owners,” says Rich Scarcella, president of PizzaSalePOS in Boca Raton, Florida. “A data breach can have a drastic effect, destroying the credibility of the establishment and potentially costing you loyal patrons.”

“The fact is, pay-at-table systems go way beyond security and convenience for guests,” Gentry concludes. “They add dollars to the pockets of restaurateurs and their employees. It’s a win-win.”