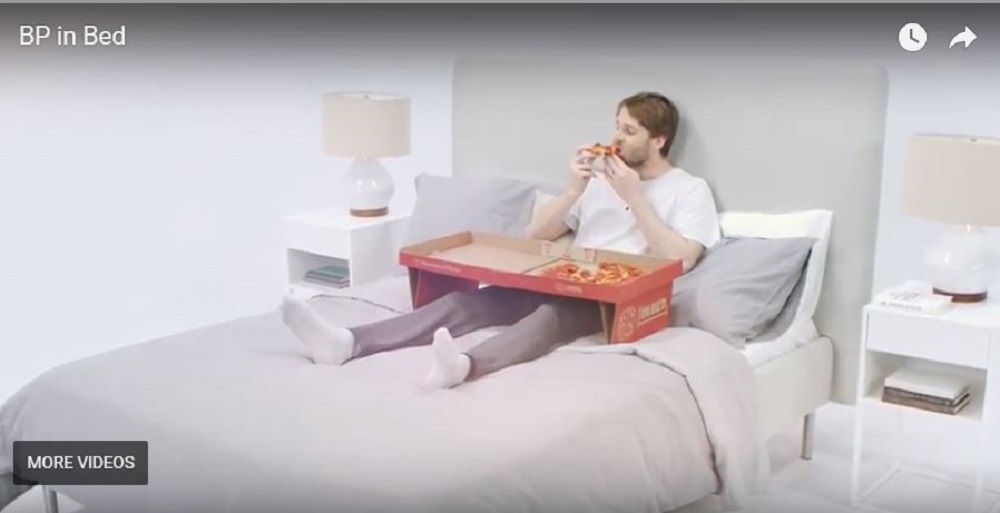 It was never all that challenging in the first place, but eating pizza in bed just got even easier, thanks to a new pizza box developed by Canadian chain Boston Pizza.

The box folds into an over-the-lap tray that can be enjoyed while sitting up in bed, reports Adweek.com.

It looks like a regular pizza box, but two triangular cardboard legs fold out and lock in place to form a miniature dining table. The limited-edition box, described in a video as “the breakthrough we’ve been waiting for,” was developed by Toronto ad agency John St. as a Father’s Day promotion.

“As Canada’s pizza leader, we’re always looking for new ways to make pizza eating more fun and convenient for our guests,” said Adrian Fuoco, Boston Pizza International’s senior director of marketing, in a press statement. “And with more TVs in bedrooms than ever, and more seasons [of streaming TV] to binge-watch, now’s the perfect time for this kind of pizza innovation.”

Paul Little, creative director at John St., told Adweek.com the box was “a simple idea, but a lot of thinking went into making sure it would actually work. There were a lot of factors to consider. It had to be high enough to fit over a person’s legs and low enough to comfortably eat off. We had to compensate for the average depth someone sinks into a bed versus the average leg width, average pizza weight, the list goes on and on."

Boston Pizza is giving away a limited number of the boxes in a social media contest—on the company’s Facebook and Twitter accounts—but only Canadian residents over 18 can enter.