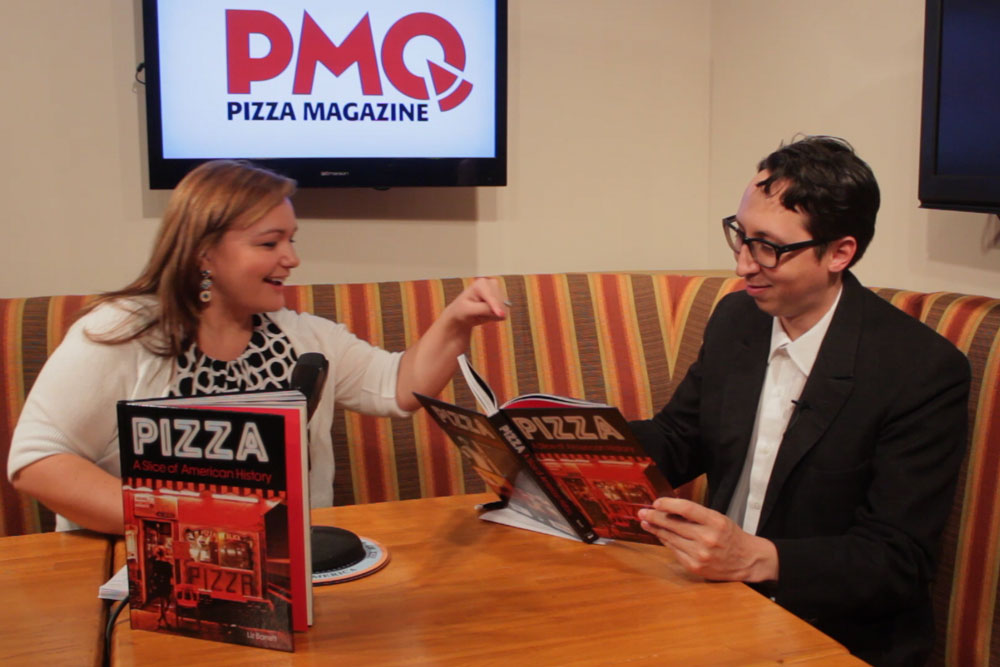 When Liz Barrett passed the torch as PMQ’s editor-in-chief to me back in 2012, I knew I had some pretty big shoes to fill. That’s because Liz has huge feet. We’re talking humongous here. You could paddle across the English Channel in one of her sneakers. The Japanese army brought her in once to fight Godzilla—she just stepped on him, mission accomplished.

OK, OK, that’s not true. Liz has perfectly normal—you might even say dainty—feet. I’m just teasing her because, frankly, I’m jealous. Liz, who, lucky for me, has stayed on at PMQ as our editor at large, has fulfilled every writer’s dream—she has authored a book, a book that has been published, a wonderful, beautiful book about one of her great passions in life: pizza, of course.

Pizza: A Slice of American History, now available in bookstores nationwide and online at sites like Amazon.com and BarnesandNoble.com, is a fun, breezy, easy read that’ll pull you right in and won’t let you go. It’s loaded with great anecdotes, pictures, recipes and Q&As, plus a pizza-themed movie quiz that was a lot harder than I thought it would be.

You’ll learn how Ike Sewell, a former liquor peddler from Texas, partnered with an Italian restaurateur named Ric Riccardo to introduce deep-dish pizza to Chicago—and then struggled to keep their pizzeria afloat because most folks didn’t think deep-dish was real pizza. (That pizzeria, by the way, was called Pizzeria Uno. You may have heard of it.)

You’ll learn how to make Detroit-, St. Louis- and New Haven-style pizzas, and you’ll discover other regional styles you may have never heard of, from the Colorado-Style Mountain Pie to a Navajo pizza made with crispy frybread for a crust, not to mention a Middle Eastern blend of spices known as za’atar that lends a taste of ancient Egypt to your pizza recipes. You’ll also meet some of the industry’s great characters, such as Jesse Ryan (a.k.a. the #1 Mellow Mushroom Super Fan), and its movers and shakers, such as Adam Kuban, founder of the Slice blog at SeriousEats.com, and PMQ publisher Steve Green.

In short, anyone who cares deeply about pizza—and anyone who simply loves eating it—will enjoy Pizza: A Slice of American History. Liz will be touring the country this fall to promote the book and may be coming to your city soon. If you want to talk to her about signing copies at your restaurant, contact her through www.writtenbyliz.com, where you can find additional information and her October (National Pizza Month) blog tour schedule. At the very least, buy your own copy, take it home and read it. It will remind you of why you got into the pizza business in the first place and just how lucky you are to make a living at it.

It really is a terrific read, and I highly recommend it. And I’m not just saying that because Liz could crush me like a bug with her huge feet. No, seriously, her feet aren’t that big! Not quite!