Many pizzaiolos pride themselves in their product. This is no exception for the Canadian pizzeria, Nat’s New York Pizzeria, in Vancouver, B.C. Nat’s has been the recipient of more than 10 honorable awards and opportunities unusual to most pizzerias, including a cover story from the 1999 Teen People Magazine, which featured Nat’s as Josh Jackson’s favorite restaurant, and Flare Magazine’s 1999 choice for the “Best take-out pizza in Canada.”

Nat’s New York Pizzeria, which is owned by cousins Nat and Franco Bastone, first opened its doors in Kitsilano in 1992 after acquiring their 100-year-old family recipe for thin-crust dough and a New York sauce. “We have relatives in Yonkers, New York, that own the Raceway Pizza. As a kid, I used to visit there, and always loved the business. In my high school annual I wrote that one day I would be opening my own Italian pizza shop,” Nat said. In January of 2000, the Bastones opened their second store to the West End to help provide more for the customers in that area.

The pizza at Nat’s is the original Neapolitan style. It’s cooked in a Baker’s Pride brick oven with traditional cheese, but heavier on toppings than a traditional Neapolitan pizza. “We don’t offer desserts, but we do salads and East coast style foot-long Heros in chicken, meatball, and veal cutlet— plus we have great pasta dishes such as lasagna and spaghetti with meatballs,” Nat said. “Mama Rosa’s homemade chicken soup recipe has also been written up in the local Province newspaper because it’s so good,” he said.

“We are right in our old high school neighborhood, so my cousin and I cater to our old high school,” Nat said. They’ve received numerous awards that have helped bring people into their restaurant, such as their 2004 nomination for the Ethics in Action award and Vancouver Magazine’s selection as the best pizza in Vancouver, a city with more than 3 million people. But with all the action coming their way, they felt it was time to give back to the community that made them thrive. “We helped start the Giovanni Bastone Foundation (GBF) in my father’s name, which supports childhood cancer research. We raised $30,000 this year at our annual Casino, Dinner and Dance night,” Nat said. To date, the GBF has raised over $50,000 for children’s cancer research that goes directly to the Michael Cuccione Foundation, which was started by Michael, who eventually died of cancer after a seven-year struggle at the age of 16. “Our next casino night is in May,” Nat said.

Nat’s has a lot of cool chalk-drawn artwork on the walls, depicting popular New York-local characters such as Spider-Man, Conan O’Brian, and scenes of the Bastone cousins flitting about New York City making deliveries. 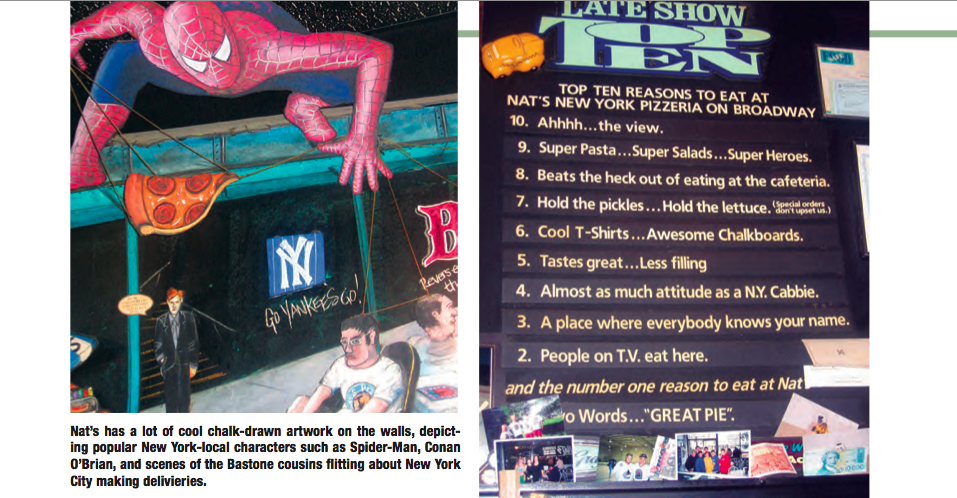 Nat said that the majority of his business comes from the local high schoolers and families. “We do a huge lunch crowd for the high school. Many of the teenagers come during their 40 minute lunch break and we give them a $3 big slice of cheese pizza with a Pepsi,” he said. “Our main focus is the neighborhood. For small kids, we cut pizza into bite-sized slices and serve them on funny trays. The kids love them,” Nat said. He also admitted that children have come in crying after birthday parties with pizza from other restaurants because they won’t eat any other pizza than Nat’s. “All the art on the walls and throughout the restaurant keeps them entertained. We try to tie the New York theme in with all the art. We have cartoons of Franco and I with Spiderman, the Letterman Top 10 Reasons to eat at Nat’s, and also pictures of me and my cousin on our bikes delivering and eating pizza,” he said.

“Since our restaurant is a casual 30 seats, we love to host children’s birthday parties. Usually we’ll do parties for three or four dollars a person,” Nat said. “We like to work with people on this because our restaurant is so small. In fact, that’s one of the biggest mistakes we made here when designing the restaurant. We only work with two ovens, so it makes it tough to have a lot of orders at once. If I could change one thing, I would have made more accommodations and planned for bigger crowds. But birthdays work well for us, because we have just enough room most of the time.”

Although Nat’s does no advertising or direct mail, unless it’s free publicity or an event they are sponsoring (such as the GBF, Big Brothers of Greater Vancouver, Big Sisters of BC Lower Mainland, and all the Vancouver Canucks, BC Lions, Vancouver Canadians, and Vancouver Giants games), a normal week brings about 4,000 people to the two restaurants. “We discourage advertising because we only have two ovens and on Friday and Saturday nights it gets so busy we sometimes have to take the phone off the hook just to catch up,”

Nat said. Though he wouldn’t divulge his sales numbers, he said they were very, very good. “Delivery is about 25 to 35 percent of our business on a rainy day and on a normal day, it’s between 15 and 20 percent,” he said. “The more Domino’s commercials that come on, the busier we get. We are all about customer service, so if there is a problem with an order, I take care of it right away. Call us and let us know the problem and without hesitation, we will replace the pizza and leave you the one you have as an appreciation.”

Nat’s is in a special spot because of the publicity they received in 1999 from Teen People Magazine, which featured a cover story about the “Dawson’s Creek” actor, Josh Jackson. Josh grew up in Vancouver, and went to Kitsilano high school where Nat and Franco attended as teens. Since Nat’s was Josh’s favorite place to eat growing up, and even still today, he decided to do his photo shoot for the magazine at Nat’s Pizza. “That article brought people from all over the world because they wanted to see where Josh Jackson ate,” Nat said.

In an effort to sponsor sports teams and to help provide tickets to less fortunate children who otherwise wouldn’t have the chance to see the games, Nat’s buys a Gold Sponsorship to the Vancouver Canucks for $4,000. They also sponsor the BC Lions for $500, and the White Caps for $500. For each event they sponsor, they receive a certain number of complimentary tickets. For the Canucks, they get 80 tickets included in the Gold package. For each ticket they are given, Nat’s matches that number and then distributes them to their favorite charities such as Big Sisters, Big Brothers and various community centers for less fortunate children. For buying these sponsorships, their name gets printed in the teams’ season programs, and occasionally gets announced at the games as a sponsor. “We also have banners up at the games we sponsor,” Nat said.

A pizzeria owner/operator can take some good advice from Nat and Franco Bastone, “The best thing we have done for our business is being consistent. If you’re consistent with a good product, attitude, and service, people will pick up on it right away,” Nat said. He stressed that it’s a good idea to keep your “no’s” in the drawer and make people feel like they are coming into your home instead of a restaurant. “You have to give things when need be if someone needs something.”