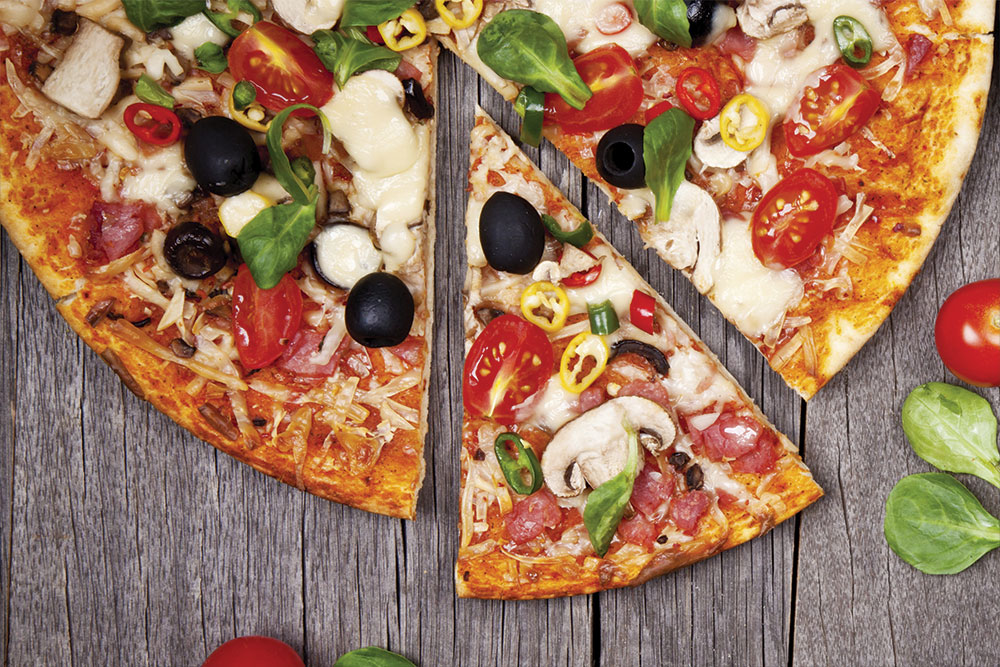 There is no National Vacuum Cleaner Day. Nobody ever thought to designate a special week to celebrate sweatpants or toilet paper or patio furniture. Aren’t you lucky to be in the pizza business? An entire month has been set aside to celebrate and promote your product. That’s 31 straight days of marketing opportunities focused on driving traffic to your pizzeria. It all happens in October with National Pizza Month, and if you start planning now, you can be ready to promote your business—and ramp up your sales—all month long. Here are some ideas and examples from pizzerias around the country:

Tesori (tesorichicago.com), an upscale pizzeria in Chicago, marked the occasion last year with a new specialty pizza every day throughout October. The restaurant released menu details in advance so customers knew what to look for each day. Specialty pizzas, which sold for $15, included Kale and Butternut Squash; Sweet Potato, Speck and Burrata; Pickled Squash and Soppressata; and Veal, Tonnato and Capers.

If that’s too ambitious for you, simply create and publicize one or two new specialty pizzas—preferably featuring at least some locally grown ingredients—for October and offer them at an attractive price. The Toledo, Ohio-based chain Marco’s Pizza (marcos.com), with stores in 34 states, rolled out its new signature pie, the Grilled Chicken Florentine LTO, and made spinach an official menu item for pizzas, salads and subs after the limited-time offer ended. Although this promo actually ran from March through June 2013, it could be easily tweaked for National Pizza Month. In conjunction with the launch of the new pizza—made with grilled chicken, fresh spinach, a Parmesan garlic sauce, four cheeses, red onions and tomatoes—Marco’s celebrated National Spinach Day and gave away free medium Grilled Chicken Florentine pizzas to customers who brought in cans of spinach, which were donated to local food banks. The Spinach Day campaign drew media attention from TV stations, newspapers and trade magazines around the country.

Village Pizzeria (villagepizzeriacoronado.com) in Coronado, California, will roll out its own specialty pie for National Pizza Month in 2014: a fall-themed Squash Pizza that features blue cheese, roasted shallots and arugula. Village Pizzeria is known for shipping in more than 3,000 gallons of water from New York City every year for its New York-style dough recipe.

Support a worthy cause.

You can’t go wrong by showing your support for a national, regional or local nonprofit. Last year, La Tagliatella (latagliatella.us) in Charlotte, North Carolina, hosted $1 pizza dinners on the first three Mondays of October as well as from October 28 through November 1. All proceeds went to No Kid Hungry, a nonprofit dedicated to ending childhood hunger. The promotion featured various specialty pizzas, including the Tagliatella (fried eggplant, Parmigiano-Reggiano, honey and balsamic glaze) and the Bismarck (mozzarella, ham and a fresh cracked egg in the middle). To encourage repeat business, La Taglietella also offered the Pizza Passport, allowing guests who purchased the $1 pizza dinners to get a free pie after buying four regular-price pizzas anytime in November or December.

October is also Breast Cancer Awareness Month, so San Francisco chain Red Boy Pizza (redboypizza.com) developed a new gourmet Margherita pizza in 2013 and donated a percentage of its sales to the American Cancer Society. Smaller independent operators can partner with a local charity, such as the Boys & Girls Club, a food bank or a conservation group.

National Pizza Month is your chance to build lasting relationships with your customers. Show them a good time through social media contests and events that encourage their participation. Based in Palo Alto, California, Patxi’s Pizza (patxispizza.com) last year created the Pizza PhotoBomb Challenge, a photo contest in which customers submitted pictures of their far-flung outdoor adventures with a Patxi’s pie. Customers posted the entry photos on Patxi’s Facebook wall or tweeted them using the hashtag #PatxisPhotoBomb. A panel of judges picked the winning entry while taking into account the number of “likes” each one received from fans. (The winner received a free Kindle Fire HD, and second place earned an iPod Nano.)

If that sounds too complicated, try a simple Fan of the Week contest. Encourage customers to submit photos of themselves enjoying your pizza anywhere, anytime, and let fans vote on their favorite. Or hold a daily Name Game contest; announce a different name every day on Facebook and Twitter throughout October, and customers with that name can come in to receive a free pizza, appetizer or slice (with proper ID, of course). It’s a great way to build your social media fan base, and the winners will often bring their friends along when they redeem the offer.

Reach out to local celebrities.

Back in 2009, Uno Chicago Grill (unos.com) in Boston celebrated National Pizza Month by concocting specialty pizzas for some of the city’s most prominent individuals. Uno’s chefs created unique pizzas based on each citizen’s personality (or “pizzanality”) and delivered the pies to them in pedicabs that crisscrossed the city. Among the 25 Bostonians honored were Governor Deval Patrick, New England Patriots quarterback Tom Brady, radio host Matt Siegel and meteorologist Harvey Leonard.

You know who the true heroes are—firefighters, police officers, military veterans, paramedics and community volunteers who strive to improve the lives of their fellow citizens. Last October in Las Vegas, Dom DeMarco’s Pizzeria & Bar (domdemarcos.com) hosted the “Pizza Challenge,” pitting the Firefighters of Southern Nevada Burn Foundation against the Las Vegas Metro Police Foundation in a pizza making contest. Each group created a signature pie that was featured on Dom DeMarco’s menu throughout October. A portion of every sale of these two specialty pies was donated to the organizations, and the organization with the highest sales at the end of the month earned an additional 10% donation.

Another possibility: Simply offer a substantial discount to local heroes throughout the month and advertise it via social media, your website, direct mail and other materials. San Ramon, California-based Straw Hat Pizza (strawhatpizza.com), for example, dedicated May 2011 to such a promotion, offering a 25% discount to members of the armed forces, law enforcement and fire departments and to EMTs and paramedics.

Throw a pizza party for the entire town.

That’s what Pizza Pizza (pizzapizza.ca), a Canadian chain, did last year at three locations in Hamilton, Ontario. Held from 11 a.m. to 3 p.m. on Saturday, October 12, the celebration featured games, clowns and face painting for kids, plus cheese and pepperoni slices, onion rings and French fries for 99 cents and $10 gift cards awarded to the first 25 customers. Put your own spin on the idea by inviting local celebrities—think TV news anchors, deejays, athletes and government officials—to participate in dunking booths. To further show your commitment to the community, turn the entire promotion into a fundraiser for a local nonprofit or school.

Team up with a local zoo or animal shelter.

This one wasn’t a National Pizza Month promotion, but it was a doozy: In 2011, Buddy’s Rendezvous Pizza (buddyspizza.com) made a special delivery to the Detroit Zoo: various pies topped with bugs, worms, fish and other weird delicacies. The order was perfect for the customers, such as anteaters, penguins, snow monkeys and wolverines. The pies were prepared in collaboration with the zoo’s staff, all with the goal of raising awareness about the zoo. Buddy’s also donated $150,000 to sponsor field trips for local schoolchildren over the next five years; meanwhile, zoo visitors received Buddy’s pizza coupons with their purchase of tickets. Even if you don’t have a zoo in your area, this idea can be tweaked to help raise funds for your local animal shelter, an always popular cause, throughout October.

Let your customers be the judge.

Kitchen Zinc (kitchenzinc.com), an artisan pizza restaurant in New Haven, Connecticut, celebrated National Pizza Month last year with its “Pie Fights” promotion. Using a boxing theme and graphics, Kitchen Zinc set up weekly contests between its various specialty pizzas and asked Facebook fans to vote on their favorites. New posts went up on Tuesday, the votes were tallied on Saturday and the winner was declared on the following Monday—customers received a 50% discount on the winning pie that night only.

Are you planning your own promotion? Download free National Pizza Month promotional artwork at pmq.com/freedownload!