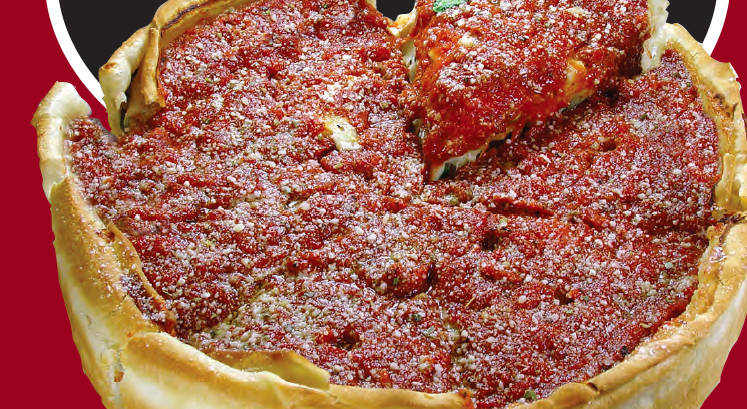 In 1971, Chicago was already known for its deepdish and unique style of thin-crust pizzas. So Italian immigrant Rocco Palese, owner of Guy’s Pizza, got into the business knowing that he had to make his mark on the pizza scene by creating something completely new—but what? That question was answered when he returned for a trip home to Potenza, Italy, and asked his mother for her recipe for scarciedda, an Italian Easter cake, which is stuffed with ricotta cheese and other fillings for the holiday. After some experimenting, he hit on the perfect formula—a highwalled crust base, piles of toppings, and another layer of crust and sauce on top—and soon opened the first Nancy’s Pizza (www.nancyspizza.com) location in Harwood Heights, Illinois, just outside of Chicago, selling what he called “stuffed pizza.”

Before long, people took notice of Palese’s new invention—and how could they not? Weighing a whopping 5 pounds for a 12” pie, this pizza was too hefty to be ignored, and comfort food-loving Midwesterners turned out in droves to try the new pizza style. The media, too, caught on: Chicago Magazine, the Chicago Tribune and ABC-TV all recognized the location as “best pizza in Chicago”—a major accomplishment in a city teeming with pies of all kinds. But even Palese probably would not have expected the growth and success that Nancy’s has achieved over the years, and its ambitious plans for expansion on the horizon. 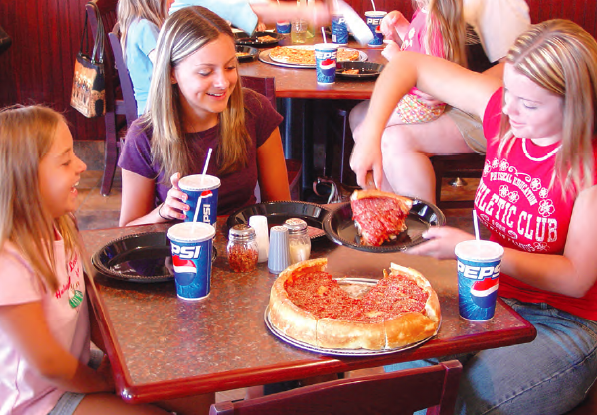 The Growth of a Brand

At first, Palese offered sit-down Italian restaurant service, with chefs and waitresses, serving traditional Italian dinners such as chicken cacciatore, veal scallopine and pasta alongside its pizza. Though the first restaurant originally seated 35, expansion was soon under way to make room for 140 seats. Through the years, other locations, more media accolades and a growing number of dedicated fans followed, but ownership changed hands in 1990, when Palese sold the business to a licensee of Nancy’s since 1978, David C. Howey Jr. Then growth really began to skyrocket.

In 1992, the first prototype for Nancy’s Pizza Express opened in Tinley Park, Illinois, and generated a model that still remains a success, with a focus on carryout and delivery. Howey began franchising in 1994, and today’s 40 locations spread across the country, in locations such as the Atlanta area, where Nancy’s outposts have found resounding success. But amidst the measured growth, Howey has focused on retaining consistency by regulating every step of the pizza making process, from obtaining raw materials to adding the toppings. “All of our stores purchase from one central distribution center,” says Howey. “We have established systems in place, with operations manuals. Our corporate trainers assist stores with training and marketing, and also with periodic quality assurance visits.” 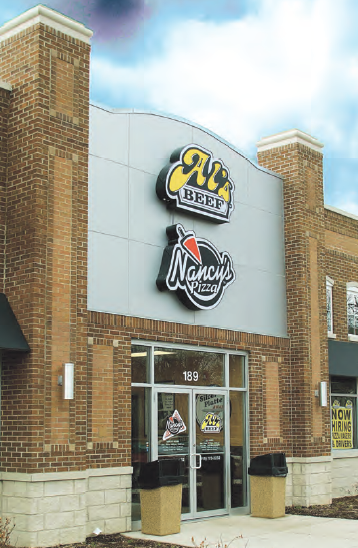 ​Howey branched out further when he decided to purchase the rights to Al’s Beef in 1999. Al’s Beef is an established name in Chicago, having served juicy Italian beef sandwiches to Chicagoans since 1938. Now, several of the Nancy’s restaurants serve both Al’s sandwiches and Nancy’s pizza, which, says Howey, make a better pair than some might imagine. “The addition of Al’s Beef to our current system expanded our penetration into the lunch daypart and gave us the opportunity to develop dual-brand units,” says Howey. “Al’s Beef complements Nancy’s Pizza because they are two very strong brands in the Chicago market, serving very different menus.”

The Nancy’s side of the menu, however, has been kept simple, with pizza (thin and stuffed), pasta dinners at select locations, sandwiches and appetizers. More recent additions to the menu are the Super Thin Crust (with half the ingredients of the traditional thin-crust pie) and the Stuffed Crust Lite (which is “only” 1.5” thick, as opposed to the usual 2.5”). On the Nancy’s side of the business, “Our pizza still represents 80% to 85% of sales,” says Howey, speaking in his current role as president of Chicago Franchise Systems. What makes the pizza such a desired, special item? Howey credits top-notch ingredients, including “dough that’s made fresh in the store every day, pizza sauce that’s mixed fresh in the store, and unique pizza toppings and recipes that we’ve created exclusively for our stores.” Another breakthrough Howey added to the business involved the creation of an oven that cut baking time for the thick pies from 45 to 13 minutes, allowing the stores to handle the lunch and dinner rushes much more effi ciently.

Nancy’s may be an established name in the Chicago area, but Howey doesn’t count on the crowds to come in by themselves. Marketing tactics for Nancy’s mostly focus on efforts that draw in locals while relying on the history and legacy of the brand as the originator of a widely imitated style, the stuffed pizza. “We have a really good sense of who our customers are, and we try to appeal to them,” says Howey, pointing to families and those in the 15-to-45 age group as the typical customers. “The majority of our advertising is local, concentrating in the immediate trade area of the stores. We use postcard mailings, Advo, Money Mailer, Valpak and menu inserts.”

Online ordering has also worked well for Nancy’s, allowing customers across the country to place their orders on the Web. Though the option was rolled out relatively recently—one year ago—and is only now being actively marketed, these sales already account for 3% of orders. The entire chain is not yet on the system, but plans are in place to have every location accepting online orders by the end of the year.

Since the start of franchising for Nancy’s 14 years ago, the chain has been careful with its growth but is now planning on making a push for increased nationwide expansion. Up until now, says Howey, “we’ve only franchised by word of mouth and the success of other franchisees. This year, for the first time, we are in the process of fi nalizing our online advertising program, attending trade shows, etc.” The end goal is a lofty one: build 100 additional stores over the next four years, in markets outside the Chicago area (in the past, Nancy’s locations have set up shop almost exclusively in Illinois). Howey is looking at Atlanta, where he has already been successful with two locations, as well as Arizona. “We intend to bring Nancy’s to many new markets,” he says. “We have a tremendous demand for our products in other cities.”

Of course, its meteoric growth doesn’t shield Nancy’s from the challenges inherent to the industry—among them, recordhigh prices for gas, cheese and flour. “Pizza prices have not kept pace with rising ingredient costs, real estate costs, etc.,” says Howey. “We do everything we can to keep prices down, but we do have to periodically increase item prices.” Howey maintains that no matter what the cost, the quality of the food won’t suffer. “We still buy the same ingredients that we always have, even with the rising costs,” he says. “We are big believers in giving our customers what they expect. We simply won’t lower quality to save money.”

That attention to the customer experience and pride in the product has kept Nancy’s locations flourishing, and Howey expects that these priorities will continue to have the same effect in the future. “It’s one thing to make money, but another to be true to who you are,” he says. “You have to be true to who you are and make the best product that you can, and your customers are going to come back.”