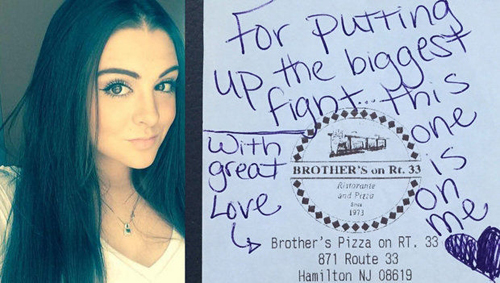 Never underestimate the power of a random act of kindness. A teenage waitress at Brothers Pizza on Rt. 66 in Hamilton, New Jersey, helped put her bosses in the national spotlight simply by showing a little compassion for one of her customers. Rick Lewallen has been fighting brain cancer and dealing with huge medical bills in the process. It's rare that he and his wife Annette can splurge on pizza, but they dropped in to Brothers Pizza recently and ordered what they could afford: a salad for Rick and one slice for Annette. When Bossi brought them their check, she had scribbled a note on it that read, "For putting up the biggest fight … this one is on me." Bossi later told the pizzeria's owners, who immediately reimbursed her. "They were behind me 100 percent," she told reporters. Meanwhile, a grateful Annette had posted Bossi's note on Facebook, and the story earned coverage for the pizzeria from the Star-Ledger and its website, NJ.com, among other websites.