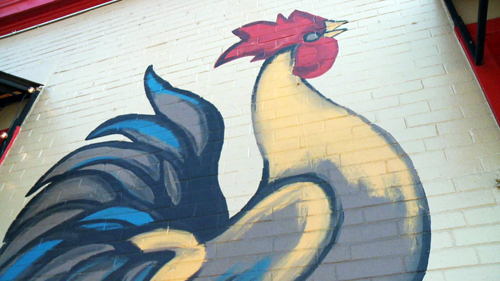 Some say they serve the best pizza in St. Louis and President Obama agreed when he declared Pi Pizzeria's product the best pie he ever tasted while running for president. But what about that rooster on the wall?

KSDK Channel 5 in St. Louis reports that if you've driven along Euclid in the Central West End, you've probably seen the big rooster on the wall at Pi Pizzeria. The station airs a question-and-answer segment called "Ask Heidi" and recently Ron Giles wanted to know what a rooster has to do with pizza. So KSDK reporter Heidi Glaus went in search of the answer.

Pi, the pizza place famous for feeding the president. opened March 14, 2008, and has yet to cool off. The cornmeal crust is what gives the pizza its signature crunch, and it's a recipe the owners discovered in San Francisco. They created Pi Pizzeria around the recipe and folks seemed to enjoy the multipurpose name (314 is the area code for St. Louis.) as much as the pizza. But where does the rooster come in?

You'll have to read more and watch the video to learn the answer to that question.