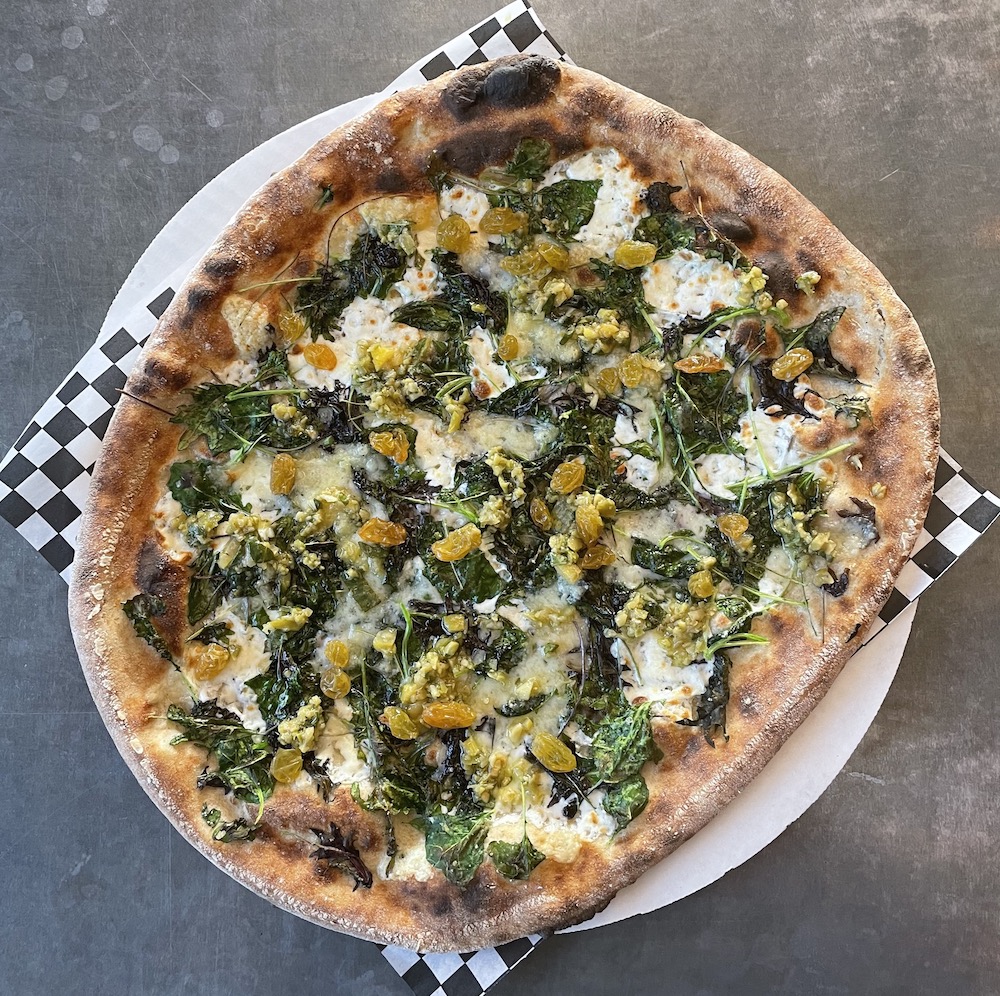 Some purists say fruit doesn’t belong on a pizza (never mind that the tomato is a fruit). Pizzaiolo Myke Olsen doesn’t listen to them. The owner of Myke’s Pizza in downtown Mesa, Arizona, goes his own way, and if you doubt that, check out his latest pizza special.

The Kale & Golden Raisin Pizza, which debuted recently, is the first in a new series of pies featuring seasonal veggies and some fruity stuff you wouldn’t normally expect. It’s baked with baby kale from local grower Steadfast Farms, plus fresh mozzarella and Idiazabal cheese. Olsen finishes his masterpiece off with charred lemon relish and golden raisins.

“The sweetness of the raisins tempers the bitterness of the kale and the sour of the lemon,” says Olsen, who is known for his innovative use of fruit toppings on his pies. “The Idiazabal also adds to the flavor complexity. The Spanish sheep’s milk cheese has the gaminess of a Pecorino and the mild nuttiness of a Parmigiano Reggiano.”

The seasonal vegetable pizza is a way for Olsen and his team to work with and support Arizona’s local farms. The Kale & Golden Raisin Pizza will be on the menu for $17 for as long as kale is seasonally available, most likely through July, Olsen estimates.

Tucked inside the taproom of Cider Corps, a craft cidery in Mesa, Myke’s Pizza is an in-the-know destination for foodies and pizza lovers alike. Olsen has gained a cult-like following for his Potato & Bacon white pie, summer seasonal Peach Pizza, and elevated take on traditional styles.

But artisanal pizza isn’t the only thing Olsen does right. Recently forced to raise his prices to keep up with rising food costs, he handled it the smart way: by educating his customers rather than springing higher prices on them without explanation. The approach earned him positive coverage by two local news outlets as well.

On April 5, Olsen used social media to share the reasons for his price hike. “The cost of doing business has increased significantly over the past couple of years,” the post read. “This is especially true for small businesses, like ourselves, who don’t have the same buying power, influence and presence as big businesses. We’ve been paying more for all of our staple ingredients—flour, tomatoes, cheese, meats and paper goods like pizza boxes.”

He also noted that wages for restaurant workers have gone up as well—and made it clear he was OK with that. “For our industry—one that has been underpaid for far too long—that is absolutely a good thing,” he continued in the post. “The amount of time, attention, skill and care that goes into making one pizza, much less hundreds per week, is tremendous and, in general, is far less valued by our society than it ought to be. I’m happy that wages are slowly making their way to what they ought to be for our hardworking and passionate staff.”

That post earned 679 likes on Instagram and 57 comments, virtually all of them positive. On Facebook, the same post garnered 147 positive reactions, no negative ones, and 14 comments, all of which were supportive. It also caught the attention of Fox10 Phoenix and AZFamily 3TV & CBS 5. Both outlets followed up with an interview with Olsen, featuring b-roll that showed his pizza makers hard at work, crafting delicious-looking pies and desserts.

“I wanted to share [the reasons for the price hike] with our community so that they’re aware of what’s kind of happening behind the scenes and what we’re working on and dealing with,” Olsen told Fox10 Phoenix. “I just wanted people to be aware of the challenges that we face as a small business, both for myself as a business owner and for our employees who show up and work hard every day. I want what we do to be valued a little more, and I feel like, in sharing some of the struggles that we face, that people can come to a better understanding and a better appreciation of what we do.”