Move over, meats! How pizza makers can appeal to the growing vegetarian/vegan market - PMQ Pizza Magazine 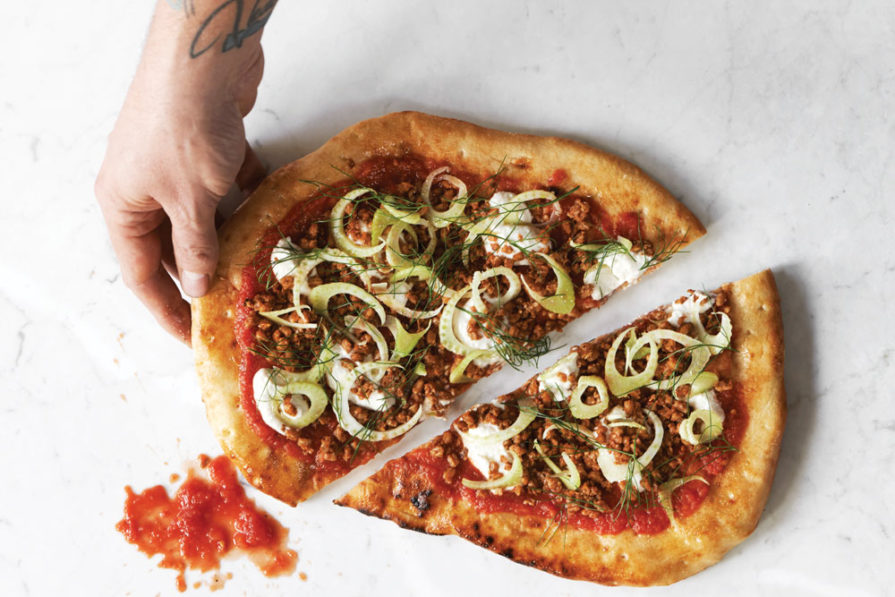 As celeb chef-driven initiatives like Meatless Mondays have caught on among even dedicated carnivores, once-unknown ingredients from around the world make their way to plates around the country, and manufacturers’ meat substitutes become ever more sophisticated, there’s no excuse for listing the same ol’ uninspired vegetarian pies on your menu.

And the demand for creative meatless combos keeps growing. “There is undeniably a paradigm shift in how consumers are eating,” says Katie Borger, senior director of marketing for Boston’s Pizza Restaurant & Sports Bar, headquartered in Dallas, with 25 locations in 16 states. “The vast majority still lean toward viewing protein as animal-based, but the more knowledgeable we become, the more obvious it is that there are other—arguably healthier—ways to consume protein.”

Here, experts at pizzerias large and small outline some of their favorite meat substitutes and how to use and combine them for memorable specialty pies. Let the inspiration begin! 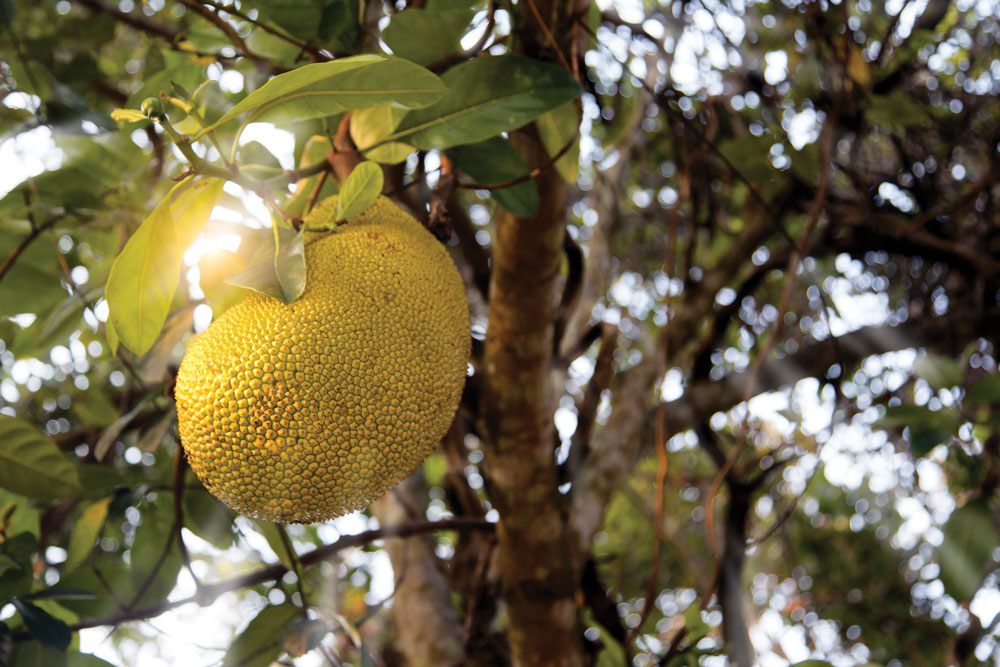 This fruit, native to India, has been getting a lot of attention from the media, who have lauded it as a miracle crop and a top food trend. Borger notes that jackfruit, when cooked and simmered with a robust barbecue sauce, offers a delicious alternative to pulled pork for tacos, sandwiches or Southern-style pies. Some manufacturers even offer their own premade barbecue-sauced varieties. But Jim Vesal, director of culinary and business development at Virtuous Pie, headquartered in Vancouver, British Columbia, Canada, works from scratch, using the fruit (listed simply as “BBQ Shreds”) for his Southern Belle specialty pie, which combines San Marzano tomatoes, cashew mozzarella, pineapple, red onion, corn and cilantro. He recommends selecting young green jackfruit in brine, not in syrup, for pizza applications. 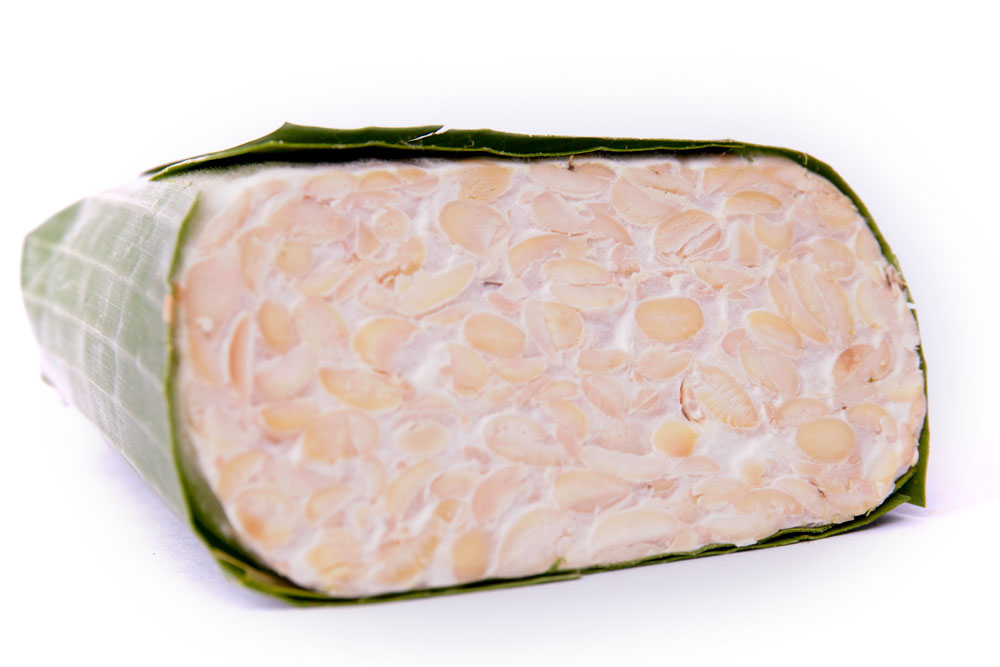 Like tofu, this Indonesian import, traditionally made from fermented soybeans, can absorb a range of flavors through marination or cooking processes. Vesal looks for varieties that are fresh or made with different types of legumes. Chickpea and peanut tempeh boast deep and complex flavors, he says, and offer a little something different to customers who have tried the traditional type. Tempeh can also be used as a bacon substitute when cut into strips, Borger adds. “My favorite ways to eat tempeh are either cubed, coated and cooked in a hoisin barbecue sauce, on top of rice and veggies, or sliced and marinated in a maple dressing to make a TLT, a tempeh-based replacement for the BLT sandwich,” she says. If you offer a BLT-style pie or a pizza that showcases Asian flavors, consider offering a protein-rich, healthy veggie option with tempeh. 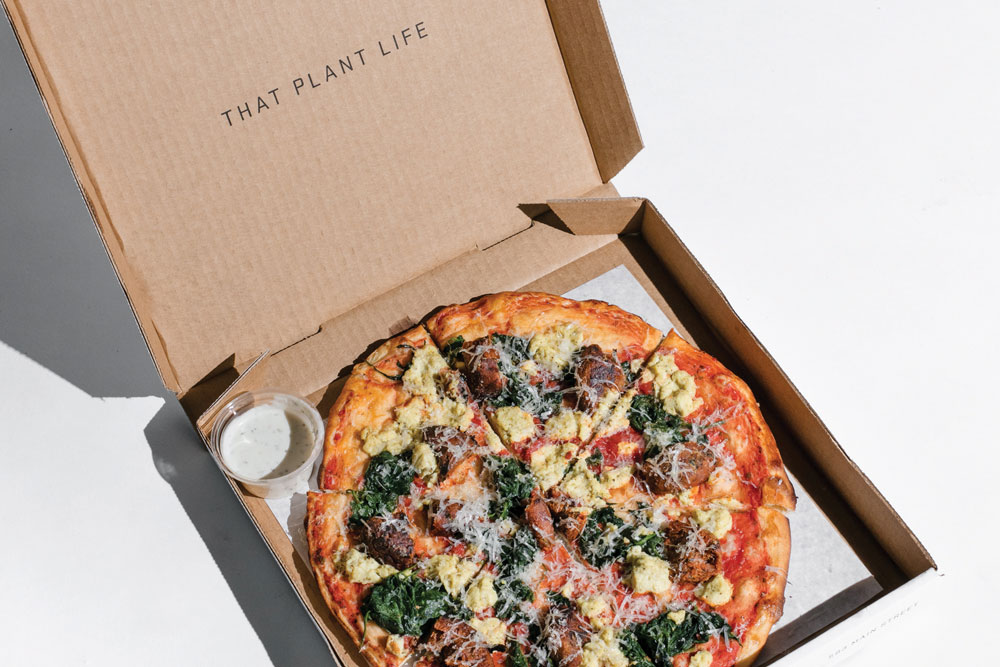 The Joy of Soy

From tofu to textured vegetable protein (TVP), soy substitutes have been longtime vegetarian standbys in cultures around the world. TVP, made from soy flour, is, as its name suggests, high in protein while being fat- and gluten-free, making it a natural choice for customers with a range of dietary restrictions. “TVP is a great substitute, as it absorbs just about any flavor and can be served as a soft topping (if cooked with a lot of moisture), or it can become a crunchy topping if cooked at high heat and allowed to dry,” Vesal explains. “TVP can also give you a similar texture and flavor as bacon or sliced meats.” For other applications, Virtuous Pie uses soy curls; they have a sturdy constitution that holds up well during more intense cooking processes, making them ideal replacements for steak or chicken. Meanwhile, its Meatball and Chevre specialty pie incorporates a chorizo made with soy, while the Pesto Chicken Bacon Ranch uses TVP for bacon bits. 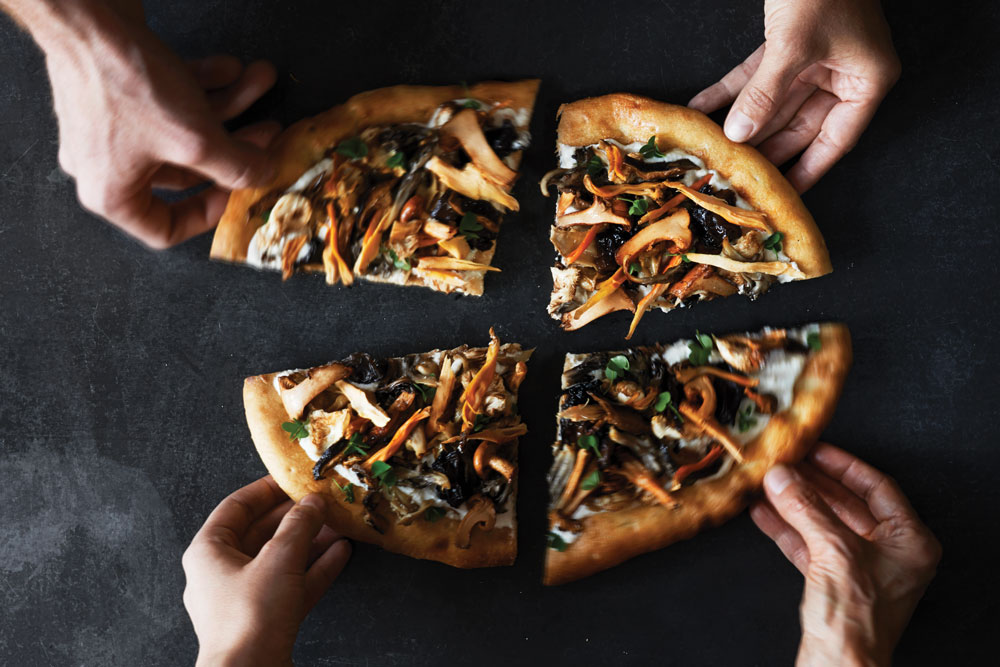 At Double Zero NYC in New York City, head chef Chris Owen says mushrooms are neutral enough to season perfectly with flavor boosters like tamari, miso, paprika and agave. “The texture of mushrooms can be manipulated using many different techniques to give a pizza the perfect bite, but we prefer the more substantial varieties,” Owen says. “I enjoy shiitake and portabello mushrooms; we love using them as a bacon substitute on our pizza.”

Vesal notes that king oyster mushrooms sport a meaty stalk, adding plenty of chew and texture, whereas shiitake mushrooms offer a deep, earthy flavor. “Mushrooms go with just about anything, but aim for flavors that balance the particular seasonings you’re using,” he says. “Cooking with vegetables or vegan toppings is no different than cooking with regular toppings; you’re still aiming for balance of sweet, salty, bitter and acid. Mushrooms bring a lot of the umami, but most of the flavor will come from seasonings and sauces.” He also recommends adding extra fat via olive oil or nondairy cheese—since most vegetables (unlike meats) don’t have their own fat stores, this step will help keep toppings moist.