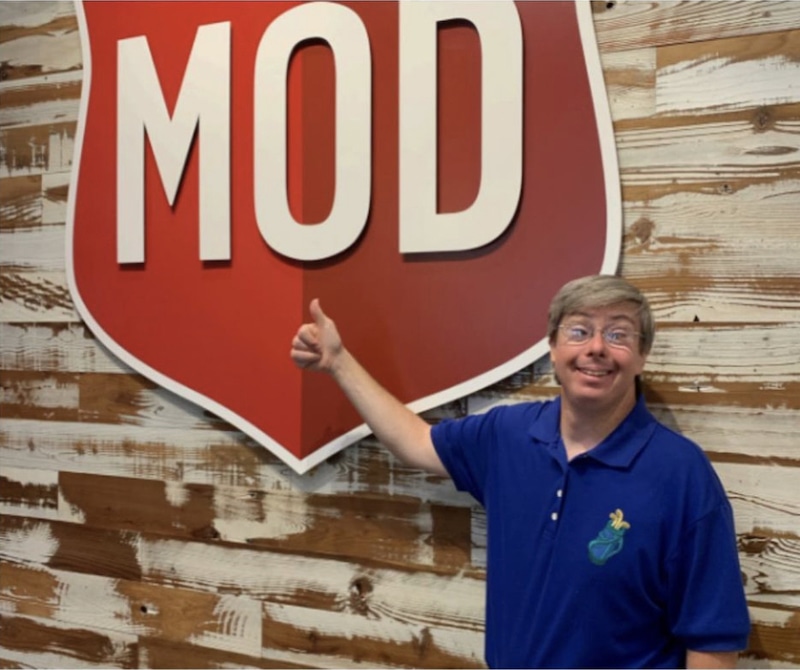 Edward "Eddy" Barnbell is one of MOD Pizza's newest employees.

Fast-casual pizza leader MOD Pizza has pledged to hire more differently abled employees—including those with autism and intellectual or physical disabilities—by 2025 as part of a larger nationwide effort to foster inclusive and diverse workplaces.

In recognition of National Disability Employment Awareness Month in October, MOD Pizza has joined the Delivering Jobs pledge, an inclusion campaign developed by Autism Speaks, Best Buddies International and Special Olympics in partnership with the Entertainment Industry Foundation. MOD will be joining a coalition of companies that have committed to creating a total of one million new employment and leadership opportunities for people with autism and intellectual and developmental differences (IDD) over the next five years.

Eighty-one percent of adults with intellectual and developmental differences do not have a paid job in their community.  But MOD has found success through building its MOD Squad workforce to include people with IDD, opportunity youth (young people aged 16-24 who are neither enrolled in school nor participating in the labor market), and those who have been previously incarcerated.

Our World from MOD Pizza on Vimeo.

MOD currently has more than 300 Squad members with IDD and several of them helped create an inspiring video titled “Our World.”

MOD last year announced that it had partnered with Best Buddies International, an organization dedicated to providing inclusive opportunities—including jobs and leadership development—for people with intellectual and development differences. MOD committed a minimum of ,000 to support Best Buddies’ mission of inclusion, most notably through the Best Buddies Jobs program.

“MOD exists to serve people in order to contribute to a world that works for and includes everyone,” said Ally Svenson, co-founder and chief purpose officer of MOD Pizza. “This pledge not only aligns with our mission to build an inclusive workplace and a culture of opportunity, but hopefully will also encourage other companies across the retail and restaurant industry to do the same. ”

Delivering Jobs is challenging all businesses to identify ways they can incorporate this untapped workforce into their diversity and inclusion plans; ensure that they have access to a minimum of 1% of employment and leadership opportunities; and empower HR personnel to invest in the long-term success of all employees.  Learn more at www.deliveringjobs.org.