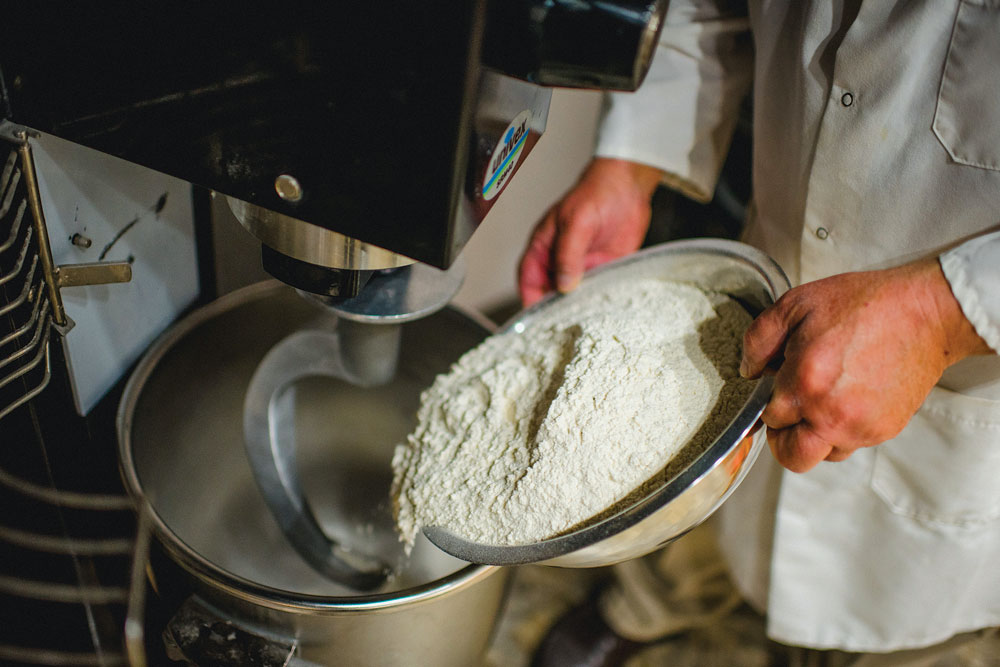 As a pizzeria operator, dough is your currency, in more ways than one: You make the dough to earn the dough. So it’s crucial to purchase the right mixer for handling your most important commodity. But mixers can also be used to churn out other essential ingredients—including sauce, cheese and toppings—at the pizzeria every day. Considering factors such as capacity, versatility, speed and durability, a mixer can help your sales soar or fasten a choke hold on production and profits.

So what are the benefits and drawbacks of the two most common types of mixers, spiral and planetary? Which is right for you? Or should you invest in both? We spoke with experts to delineate the differences and help you make a decision that could impact your operation for years to come.

In pizzerias, spiral mixers have a single focus: making dough. They’re thus named because of the motion of the hook—similar to a corkscrew turning, but in reverse (as many newbies have discovered, if it turns the other way, it pulls the dough up and out of the bowl). Jay Burton, general manager at One World Commissary, which provides dough to Pizza X (pizzaxbloomington.com) in Bloomington, Indiana, notes that spiral mixers come in many different sizes, but, typically, they’re much larger than planetary mixers. “Most planetary mixers are measured by bowl size, usually in quarts,” he explains. “Since spiral mixers are used almost exclusively for dough, they are measured by how much dough they can make.” For example, One World uses planetary mixers with a 60-quart capacity for sauce, while the spiral mixer for making dough measures out at 334 quarts—spinning out a maximum 551 pounds of dough at a time.

Even though spiral mixers have a greater capacity, they take up the same space footprint, notes Tom “The Dough Doctor” Lehmann, a Manhattan, Kansas-based consultant and trainer for the pizza and baking industries. “Spirals will mix a larger dough and do it just as efficiently, but thanks to a large bowl and a small spiral, you don’t need as much horsepower as a planetary,” he says. “Mixing dough is also not as abusive on a spiral mixer, because the dough is in constant contact with the agitator. So, simply due to the mixing action itself, spiral types tend to be more durable and last longer.”

With spiral mixers, the dough mixing attachment and the bowl holding the ingredients both spin, and spiral mixers usually have a fixed dough hook (so they can’t accommodate different attachments), Burton adds. “A spiral mixer is great if you’re making large volumes of dough,” he says. “Last week, we made six tons! I couldn’t imagine trying to do that with a small planetary mixer. Plus, having the bowl spin while the dough hook is mixing the dough ensures that the dough won’t get overworked in one spot of the batch; all of the ingredients are mixed evenly.”

For a high-volume pizzeria, Burton believes a spiral mixer is the optimal choice, since it requires less time and less labor to make more product. But Lehmann adds that even if your pizzeria isn’t currently high-volume, it’s important to consider the future when choosing a mixer. Because spiral mixers can mix at 25% capacity, you can use a 200-pound-capacity mixer to mix only 50 pounds of flour, or up to 250 pounds, since spirals are designed to hold up to excess capacity. “You can’t get that wide latitude with a planetary mixer,” Lehmann says. “Some operators end up needing to double their dough capacity by buying a new mixer, but you don’t have to do that if you choose the right mixer to begin with. Look at where you want the mixer and your business to be within the next three to five years.”

If you’re looking to grow production at your pizzeria—or branch out to additional or larger locations—a spiral could be the right choice for you. Or if you’re looking for a mixer only to mix dough, Lehmann also recommends a spiral model. “Many commissary operations large and small, which supply dough to several locations, lean heavily toward spiral mixers because they’re used more frequently, more hours during the day,” he notes. “Planetary mixers can be more prone to need ‘attentive duty,’ whereas a spiral mixer is pretty much bulletproof—when mixing dough, it’s in its element.”

There are some advantages to a planetary mixer. With the removable bowl and hook, cleaning is done in a fraction of the time. They’re also much more versatile and make cheese grating possible.
—Mark Altarac, Precision North America

On the other hand, perhaps you would like to remain a one-location independent and your output tends to be lower-volume. Or maybe your mixer needs to perform more tasks than simply mixing dough. A planetary mixer can meet these needs. This mixer is named for its design: the mixing attachment turns, but the bowl remains stationary, like the Earth rotating around the sun, Burton explains. “I’m not sure if planetary mixers are more popular in pizzerias, but I can see why they could be,” he says. “The thing I like most about the planetary mixer is that most, including my 60-quart model, have a power take-off unit, or PTO, that can take multiple attachments.”

Hence, One World can utilize its planetary model for a variety of needs: Veggie slicers, cheese graters, meat grinders and juicers are just a few of the attachments that can be added. “I love the veggie slicer attachment,” Burton enthuses. “It saves a ton of labor and gives you a consistently uniform product.”

Lehmann agrees that an operator should first consider what he needs the mixer to do. “Do you want the same mixer to mix sauce in addition to dough? Are you saving money by buying block cheese and want to grind it yourself?” he asks. “If so, you’re probably much better served with a planetary because it has an attachment hub—and I don’t know of any spirals with an attachment hub.”

As far as dough mixing action, planetary and spiral mixers offer similar performance and handling of dough, so versatility is often a key factor in choosing one over the other. And Lehmann confirms that planetary types are indeed more common in pizzerias today. They also cost about the same as spiral types.

“For smaller-volume pizzerias, I would suggest a planetary mixer,” Burton concludes. “The time- and labor-saving attachments, not to mention the different mixing attachments, make this a do-it-all option.”

Best of Both Worlds

When operators are in the market for a new mixer, Lehmann asks, “What’s wrong with your existing mixer?” If the operator requires more capacity, he asks if the mixer is used for anything else, such as sauce or cheese, and if it has suitable capacity for those other jobs. “If they say, ‘Sauce and cheese capacity aren’t a problem, but we simply can’t mix enough dough,’ I ask, ‘Is it possible to move your planetary to the side and add a 100-pound-capacity spiral mixer?’” Lehmann explains. “If you have that extra space, purchasing a spiral would be a much better option than a second 100-quart planetary mixer.” Ultimately, Lehmann says the planetary is a “jack of all trades, master of none,” while a spiral is more aptly described as “very good at what it does and nothing else.”

Indeed, you might find that the “right mix” for your store involves having both types on hand for different applications. “For higher-volume stores, I would strongly recommend buying both spiral and planetary mixers,” Burton says. “The dough volume and quality of a spiral mixer, coupled with the versatility of a planetary mixer, gives your store the best tools for production success.”