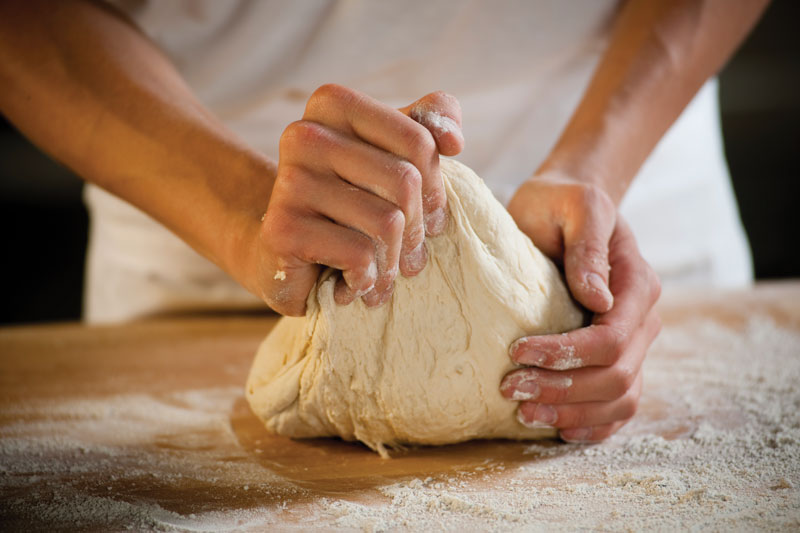 There are two methods to determine whether your pizza dough has been properly mixed—a visual test and a physical test. The latter is a bit complicated; it requires you to form the dough into a ball and stretch it between your thumbs to judge proper development. It’s a difficult procedure to explain, but the visual test, fortunately, is both easy to describe and to put into practice.

All you need to do is watch the dough as it develops, paying close attention to its appearance. The dough will first look to be somewhat gray in color and have a rough, almost curdled appearance. As the mixing process continues, the color will begin to brighten, looking more yellow than gray.

At this point, you can stop the mixer and look at the skin on the dough. Ideally, it should be smooth and without tears; if it still looks somewhat torn, continue mixing for another minute or so and check again. The dough ball in the mixer should have a smooth, satiny appearance without tears in the skin. When it takes on this visual characteristic, the dough has been sufficiently mixed for making your pizzas.

There is an exception, however. If the pizza dough is going to be frozen, it’s better to mix the dough until a thin gluten film can be formed when the dough is stretched between the fingers. This is known as the gluten window test. Additional mixing is needed in this case; that’s because the dough will be frozen without benefit of 24-hour cold fermentation time, which allows for additional gluten development.

To visualize this, take some pizza dough that has sat in the cooler for 24 or more hours, cut an egg-size piece off and stretch it out to form a gluten film, which by now should be pretty well developed. The gluten film can be stretched so thin as to allow you to see fine skin details through the gluten film.

The late Tom Lehmann was the longtime director of bakery assistance for the American Institute of Baking before retiring to become a full-time consultant. Prior to his death in 2020, he contributed hundreds of dough-related columns and articles to PMQ.