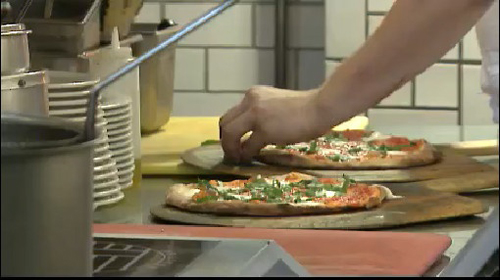 A Wisconsin police detective has received dozens of get-better-soon pizzas in his hospital room after being shot by a crime suspect.

Wisn.com., Milwaukee's ABC affiliate, says charges are expected against a Milwaukee man accused of shooting the Wauwatosa police detective who remains in serious condition. Detective Jeff Griffin is recovering, but meantime, the community he protects — including Pizzeria Piccola in Wauwatosa — is rallying around him. Dozens of pizzas from the pizzeria were sent to Froedtert Hospital on June 23 to feed his family and even the doctors and nurses caring for the injured detective.Pizzeria Piccola General Manager Irene Lannoye said they often have members from the Wauwatosa Police Department stop by for lunch, so when an officer came in June 23 before visiting Griffin in the hospital, Lannoye and her staff wanted to help.

Find out more about a pizzeria's devotion to the the community servants who put their lives on the line.