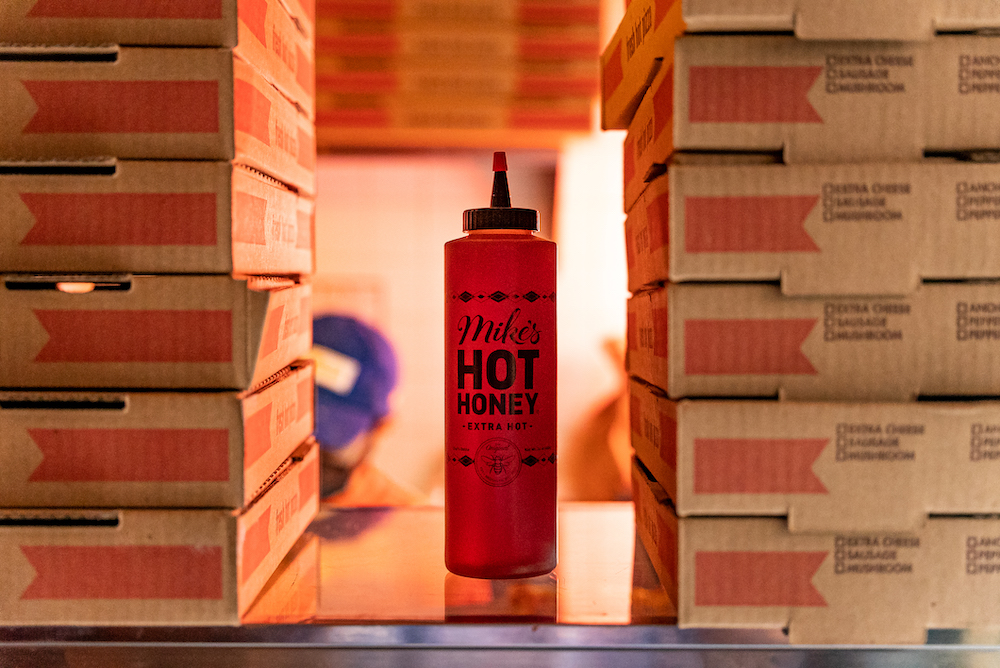 According to a press release, Mike’s Hot Honey – Extra Hot delivers an even hotter kick with more chili flavor while staying true to Mike’s signature slow-building heat. From wings and pizza to sandwiches and cocktails, the extra chilies cut through even the richest of pairings, delivering its signature sweetness with a more powerful kick than the Original.

When Mike’s Hot Honey first launched the Extra Hot variety at retail in 2020, foodservice customers were anxious to get their hands on it, the company reports. Scarr’s Pizza in New York, New York, was the first and created a signature pie called “The HOTBOI” with pepperoni, jalapeños and Mike’s Hot Honey – Extra Hot. Fast-casual seafood chain Luke’s Lobster launched an LTO “Hot Honey Lobster Roll” that has returned to the menu three times by popular demand.

For Scarr’s and Luke’s Lobster, these new pack sizes mean better value and efficiency in the kitchen. The 24 oz. Chef’s Bottle is ready to use for back-of-the-house, and the single-serving 0.5 oz. squeeze packet is ideal for takeout, meal kits and more.

“Since we launched 13 years ago, we’ve purposely kept our product line very focused,” Mike’s Hot Honey founder Mike Kurtz said. “We’ve always believed in doing one thing really well, and our line extensions to date have almost exclusively been new pack sizes of our original product for different usage occasions. When we took the plunge and launched an Extra Hot flavor to satisfy those calling for a hotter version in 2020, we weren’t sure if it would expand beyond retail. But the feedback on the product has been great, so we knew our next step was developing foodservice pack sizes to make it more convenient for our restaurant partners to bring the extra heat.”

Mike’s Hot Honey has been elevating everyday eating experiences since 2010, when its first drizzle on a pizza at Paulie Gee’s in Brooklyn sparked a word-of-mouth sensation and created a new category of pizza topping, the press release states. By popular demand, Kurtz started selling his small-batch, hand-labeled hot honey bottles to visitors of the pizzeria, as well as other local restaurants and businesses. Today, Mike’s Hot Honey can be found in thousands of restaurants and retailers across the country, with the same original recipe in the bottle.