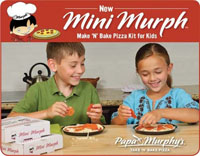 Kids in Mesa, Arizona, got the opportunity to help other kids in a promotion put together by a Mesa, Arizona franchise of Papa Murphy's. Franchise owner Jarod Laney partnered with nearby Webster Elementary School to bring in children to help make "mini-Murphs" – small personal pizzas – to be donated to the United Food Bank. The small cheese pizzas were distributed to economically disadvantaged children, reports the East Valley Tribune. Kids in the fourth, fifth and sixth grades participated in the event, which earned positive media coverage for Papa Murphy's while helping spread the joy of pizza to people in need.

Learn more about this promotion.