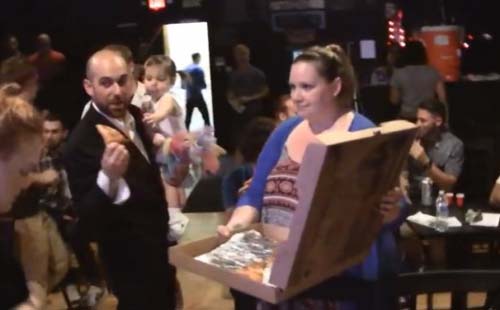 Theblaze.com reports Robin Trevino, a male member of an Illinois-based comedy troupe, purchased two large Memories pies while recording the buy, and drove them back to his home in Walkerton, Illinois, on Sept. 26. He fed the pranked pies to guests at his wedding to husband, Jason Delgatto. Trevino posted the video, in which he didn't revel his pizza plans to Memories employees. “Memories Pizza will be catering our gay wedding,” he says on camera. “They have no idea that this is going to happen, but it’s happening.” Trevino is a member of GayCo Productions, a comedy ensemble focusing on LBGT issues. The clip, which can be viewed on the group's YouTube page, is part of a “50 States of Gay,” a series celebrating legal same-sex marriage.

Watch Trevino give Indiana's most controversial pizzeria thanks for the memories.