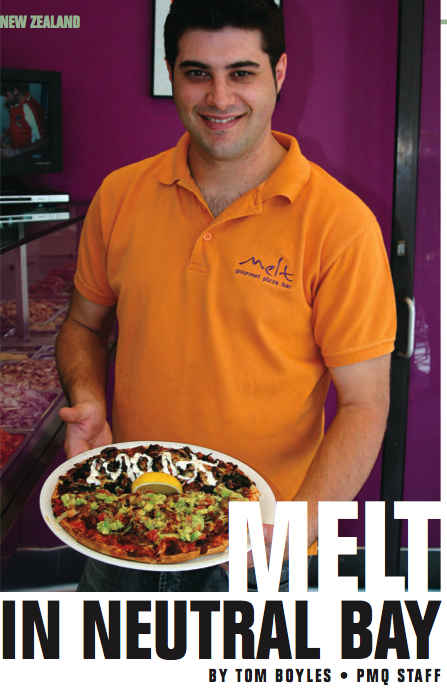 You’ve read about Melt Pizza in New Zealand, but it seems that more than one person has considered this a perfect name for a pizza shop. Peter and Nina Augoustis, finalists in the Best of the Best Pizza Challenge, approached me at a function back in September and asked me where the Melt pizza shop in New Zealand got their name and when did they open. As it turns out, Peter and Nina have a shop in Australia called Melt. Coincidentally, both their shop and the one in New Zealand opened about the same time. After talking with Peter for a while, I thought it would be a good idea to make a visit because he seemed to have his business in order, so I drove out to Neutral Bay to check him out. We sat and had a beer and sampled about seven different types of pizza, of which the Morrocan Lamb was the standout. With my belly full, I thought it might be best to start figuring out what he did with his business before my full stomach put me to sleep.

When you walk into the shop all of the ingredients are out on display and it is possible to see how Melt got their popularity in the North shore. All of the toppings are fresh, and prepared daily on their premises, and the result is seen in the final product – a great tasting pizza.

MENUS THAT “STICK” AROUND 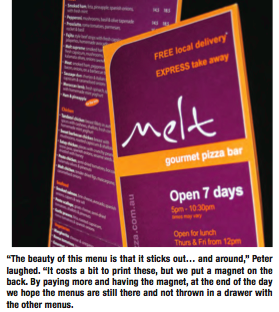 One of the first things I noticed when I walked in the shop was his menu. They were designed with magnets on the back. “The beauty of this menu is that it sticks out… and around,”

Peter laughed. “It costs a bit to print these, but we put a magnet on the back. By paying more and having the magnet, at the end of the day we hope the menus are still there and not thrown in a drawer with the other menus. We keep our menu simple and divided into categories, but we have a lot of choices. One thing that is popular is the extensive vegetarian menu, probably the biggest in the North Shore. Here we have a lot of vegetarians and with a lot of choices for them, they come and eat here. We have even started to do gluten-free bases, opening our market further. If you buy something like 5,000 menus, they’d be $1 each, but if you buy 100,000 you can get a better price. I order 20,000 at a time and pay close to $3,000, which will last me about four months. We do the letter drops maybe every three months we do close to 10,000. I’ve noticed if you do too many, say if I want to do maybe 40,000 and go and hit every suburb… imagine all those people calling. You cannot do it. We want to make sure of our priorities and make sure that it’s only the best product that comes out of the oven.”

Peter said they also market themselves through sponsorships, like their local soccer team, which is the girl’s 1st division team. Peter says he spends close to $2,000 for the sponsorship and gets their logo on the team’s jerseys and it gets the Melt info on their web site. “They put me on their website, so that is exposure to an additional 4,000 potential customers,” Peter explains.

“There’s about 400 people that live in the suburbs that are with this cause, so being a sponsor has really been great and done us well. In addition to exposure from the jerseys and web site, we do additional marketing. We offer discounts and specials and sponsor their events, which is great for the teams and makes them come back to us because they get a discount. That’s been great and the return on that has been fantastic.”

Peter said one thing that does work is mail drops. He does 2,000 a day for five days. “It’s $35 for 1,000,” he said. “Some people will call you on the night they get them in the mail, some people call you on the weekend, but it works out to be about four to five days from the time I send them that I see the results.”

Another thing they do with the teams is that every year they have a whole team come to the shop and he teaches them how to make their own pizzas. “We teach them how to be part of the community and how to make pizzas,” Peter said. “It’s very satisfying when people come up and start conversations that have resulted from working with the groups. A lot of people recognize you when you walk down the street – it’s a very friendly community. They call me Pizza Pete – it was quite funny in the beginning but now I am used to it.

“Some like sports marketing and some don’t, but I’ve tapped into using someone else’s website and tapped into another 4,000 readers and that’s exclusive for a whole year, and I get first pick for next year. We have our own website, which is great, and you’d be amazed at how many people call and say, ‘I don’t have your menu.’

“The beauty of this menu is that it sticks out… and around,” Peter laughed. “It costs a bit to print these, but we put a magnet on the back. By paying more and having the magnet, at the end of the day we hope the menus are still there and not thrown in a drawer with the other menus.  We just direct them to www.meltgourmetpizza.com.au and they call you back in five minutes.”

Peter said they have also tried the local papers. He said the local paper is a great paper, it has color, shows realistic advertisements, editorials, the whole works. They did that and it was about a $600 investment that they tested to see if it was going to work. To track the effectiveness, they ran a special, like you get free margarita on school holidays if you order the special deal, and the customer had to show the coupon. That showed how many people actually responded to the newspaper offer. He said that was unsuccess– ful for the amount of money because he got maybe eight or nine coupons back.

Peter said one thing that does work is mail drops. He does 2,000 a day for five days. “It’s around $50-$60 for a 1,000,” he said. “Some people will call you on the night they get them in the mail, some people call you on the weekend, but it works out to be within four to five days from the time I send them that I see the results. On a Friday it dwindles, that’s what you have to worry about, you have to space it out and like I said if you do 20,000 in one week, you can’t keep up.”

Peter said his POS system is a very good investment for monitoring mail drops and running the business. “We log what date and time we do certain streets in a certain area with mail drops, so I know who has been mailed and who hasn’t. I don’t want to annoy them nor do I want to waste money hitting the same area twice. 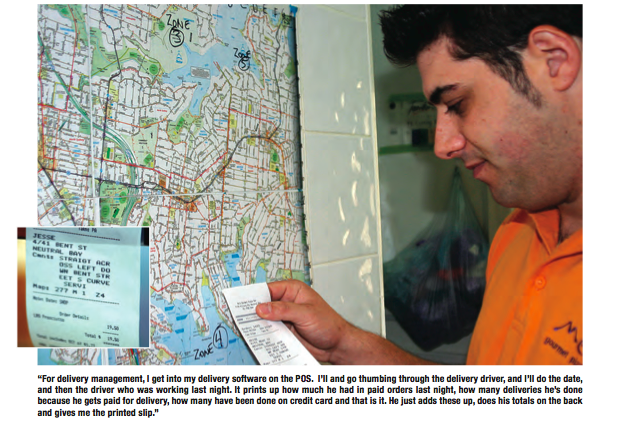 “We’ve also tapped into the corporate market,” he said. “We’ve done a few mail-outs with the corporate market, so we’ve really had some big orders. Right now we just did one for a local advertising agency, and they’ve ordered from us every Thursday for the last six months. We bill them over the phone by credit card. It’s the same time, same place, same pizzas every week. To get the corporate accounts we have to approach them or we get mentioned by one of our customers that works up there.

“What we do is give them a lunch on us for free. We tell them that we are right up the street. I will ask if they are hungry and tell them that we can fix their pizzas in about an hour. So we’ve done that before and when we leave our menus there, the orders come in the next week. It’s loyalty building and it’s well liked.”

HOW THE POS SYSTEM HELPS

Melt uses an Aussie-based POS system. To set up the system, they had to buy a computer, which was about $1,500 and then basically license the software from them. “ We pay about $88 a month and paid about $1,500 in hardware, which included the cash register, the printer and the flat screen,” he said. “It runs on DOS, which is a bit of a dinosaur system, but very fail safe. The total was about $3,000 in equipment and $88 a month for the service. We could pay a programmer to make our own program, but we would pay like $10,000-plus. A POS simplifies your whole system.

“It looks after every area of the pizza shop… it tells you how much chicken you’re putting on your pizzas. You can weigh up how many chicken pizzas you sold and how much chicken you’ve bought, so you can work out if your staff is putting too much product on. You can work out how long it is taking you to put on different stuff. In no time I can pull those numbers up or find out how much business I did last night, what’s not selling, what’s the best seller, what’s not the best seller, or why am I going through so much salmon…all I have to do to look is pull it up on the screen. This stuff is there, that $3,000 or $4,000 is worth much more to you when you get bigger. The POS guy is based out of Melbourne. Currently it’s running on DOS. I know a lot of big businesses want to run on Windows, but to me the DOS system is fail-safe. With the POS, I can monitor how much I make.

“For delivery management, I get into my delivery software on the POS. I’ll go thumbing through the delivery driver, and I’ll do the date,

and then the driver who was working last night. It prints up how much he had in paid orders last night, how many deliveries he’s done because he gets paid for delivery, how many have been done on credit card and that is it. He just adds these up, does his totals on the back and gives me the printed slip.” 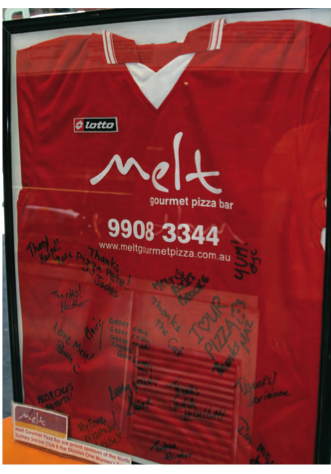 Melt in Neutral Bay has been open now 16 months and Peter and Nina are extremely happy with their decision to move to the pizza business. Peter was working in a Greek restaurant that did more traditional style pizza and learned how to mix dough when he was about 13 after school. He used to mix all the dough and do all the dough balls and then they made him start running the whole show for the pizzas. “I did that all through studying aviation and then I turned to aviation to support my lifestyle for about eight years,” Peter said. “I kept remembering the food industry and I’m an evening kind of person. Now I just spend time in the day with my kids and I see my wife. We put our menu together with some help of family and friends, research and some advice from chefs saying what would go with what. It took us about four months to finalise our menu and we just went with it. There have been very little changes, which was really lucky for us…we felt we should keep it simple, keep it easy.”