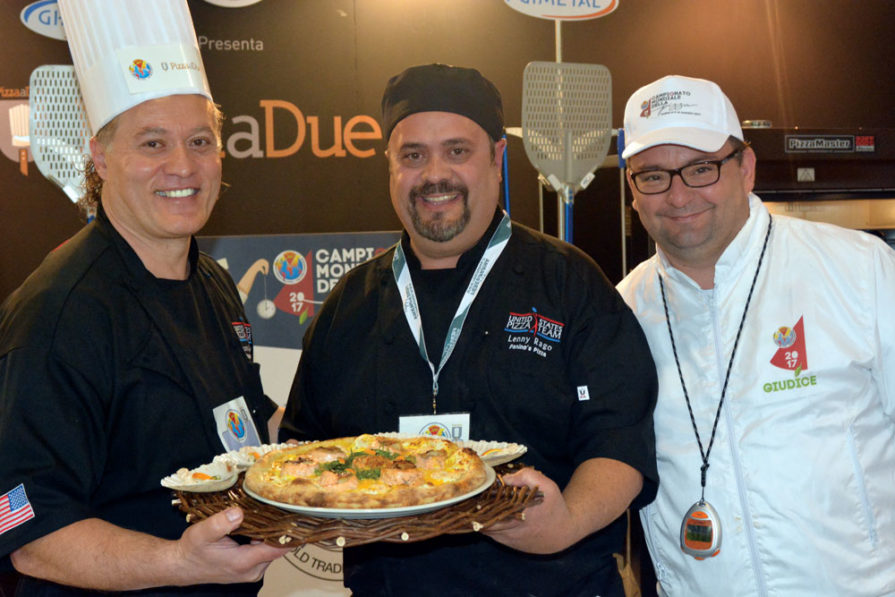 With his partners and teammates, Gino Rago and Bruno Brunetti, Leonardo “Lenny” Rago, co-owner of Panino’s in Chicago, has traveled the globe and won acclaim in various pizza contests, including the top prize in the 2018 Pizza Pizzazz competition at the Mid-America Restaurant Expo in Columbus, Ohio. Daniel Lee Perea chats with the man behind the pan in this USPT Q&A.

PMQ: To start with, who is Lenny Rago?

Lenny Rago: Lenny Rago is a hardworking entrepreneur and a family man. I’ve been working in pizza since I was 15 years old, riding to work on a bicycle for a mom-and-pop pizza place, and worked my way up the chain. I’m motivated by success. I like when things work. Sometimes it’s not all about the money. I feel like I’ve accomplished something when I do things the right way. I’m also in the music world, managing a couple of bands with a friend of mine. I write songs and go on the road with the bands sometimes. It helps keep my mind clear and balances out my lifestyle. It’s therapeutic. It relieves stress. Some people play tennis or golf as a hobby—I’ve got the band thing. But the pizza business is my income and my passion.

Rago: When a band goes on the road, it’s all fun and games until they do their music thing for two or three hours. But with pizza, it’s a whole weekend. It’s eight-hour shifts. The U.S. Pizza Team builds real friendships. It’s great when you can call up Michael LaMarca or Brian Hernandez and say, “Hey, I need some advice.” That’s the difference.

PMQ: Your brother, Gino, was partially raised in Italy. Were you?

Rago: No, I was born and raised in the United States. But the household spoke Italian. They would say things in Italian, then I’d answer in English, and that way you pick up the language. Everything we ate was Italian.

PMQ: Were your parents immigrants?

Rago: My parents were immigrants. My mom came here when she was 22, and my dad came and they got married when he was 25. My [maternal] grandfather had been coming here, living and working in America, for a long time before that. He had dual citizenship here. He was building railroads.

Rago: Yes! He had the same name as me—Leonardo. He would come here, work in the rail yards for a while, then go back home to Italy and make more kids! My grandfather’s American citizenship is what got my family here. 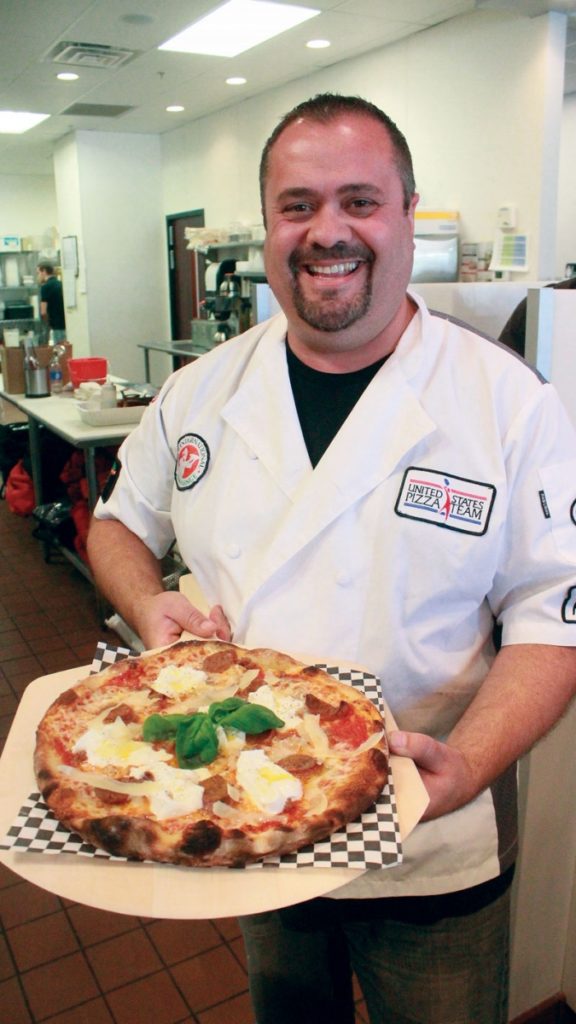 PMQ: You grew up in an Italian household that knows only authentic Italian cuisine. How does that inform what you’re doing with food now?

Rago: We do things similarly to our parents. We took their knowledge and just improved their methods. A lot of the methods they did at the house, we do now. For example, instead of buying breaded eggplant for our eggplant Parmesan, we batter and fry it ourselves, the way our mom taught us. Same with our chicken Parmesan. I remember my mom making grilled cheeses. She would take one of those large oven trays, put 10 sandwiches on it and bake them, then flip them over. She’d make pizza in the same tray—square pizza, and she’d cut it with scissors. I think simplicity is what made pizza back in the day, and that’s why the Neapolitan style has been so successful over the last few years: the simplicity.

PMQ: Do you think growing up with that authentic cuisine gives you a competitive advantage over people who don’t have that background and learned to make pizza as an adult?

Rago: I think there is an advantage. You see the ways that it should be done. Then, when you grow up and get into the real world, you take that knowledge with you and develop it into your recipes. We actually saw my mom firsthand doing everything. Every Sunday, she’d make meatballs. We watched her make the dough or make the sauce, whatever. I think that does have an advantage. Researching it or learning it on the internet isn’t the same.

PMQ: You and your brother, Gino, are business partners. What was that sibling relationship like growing up?

Rago: We grew up in the city [Chicago]. We’d go out there and play every sport possible. If it was football season, we’d play football. If it was hockey season, we’d go in the alley and play hockey with baseball catcher’s gear. We fought a lot, because we’re boys. Boys fight. Being four years apart, he did things before I did. In business, we both have our strengths and weaknesses. Do I do a lot more work? Yeah, probably. Do I complain? No, because I know he’s out there doing things that are beneficial to the business. In pizza competitions, I don’t think we’re competitive because we both know it’s about Panino’s.

Rago: It’s a toss-up. I went into that Cleveland competition [the 2015 Northeast National Pizza Trials] and won, and I didn’t even think I was top 10! And then Las Vegas [2017 International Pizza Challenge, Pan Division], which was a two-day competition. I saw 30 pizzas from 30 people from all over the world. And to come up second place in the world and first place in America, it’s like you’re on top of the world for a day or two. That was one of the highlights. Competitions are a fun way to hang out with guys. It’s a fun way to market your brand: “Hey, I’m part of the United States Pizza Team!” It’s done wonders for us. It’s done wonders for everyone else on the team.