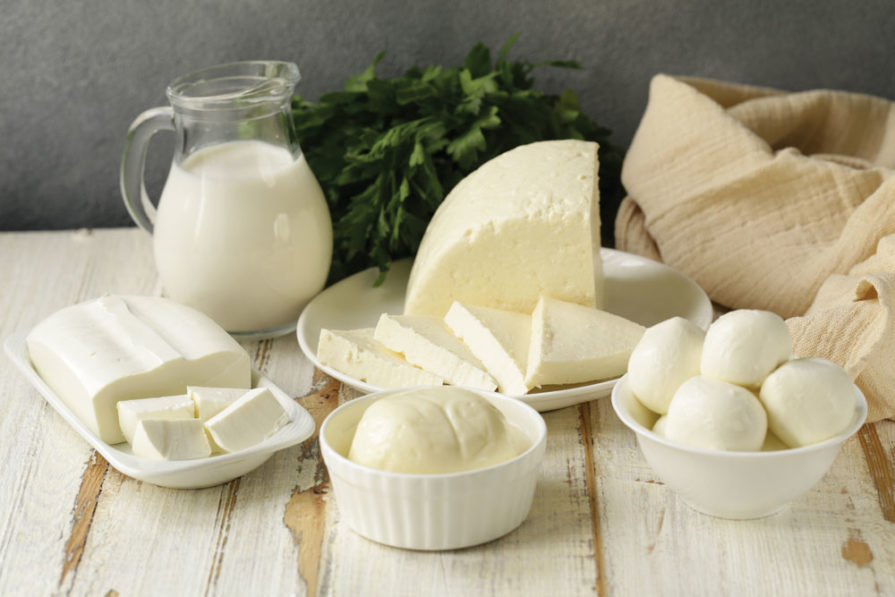 From creamy and smooth to salty and tangy, soft cheeses offer up a world of flavor and texture for your menu. Even better, pizzeria operators can widely cross-utilize them on pizzas, pastas, salads, appetizers—even soups, breakfasts and desserts. Here, we break down some of the biggest stars in the soft cheese stratosphere, from their notable characteristics and best food, beer and wine pairings to their optimal storage techniques. Why not explore new ways to use the freshest of fromage for your own operation? 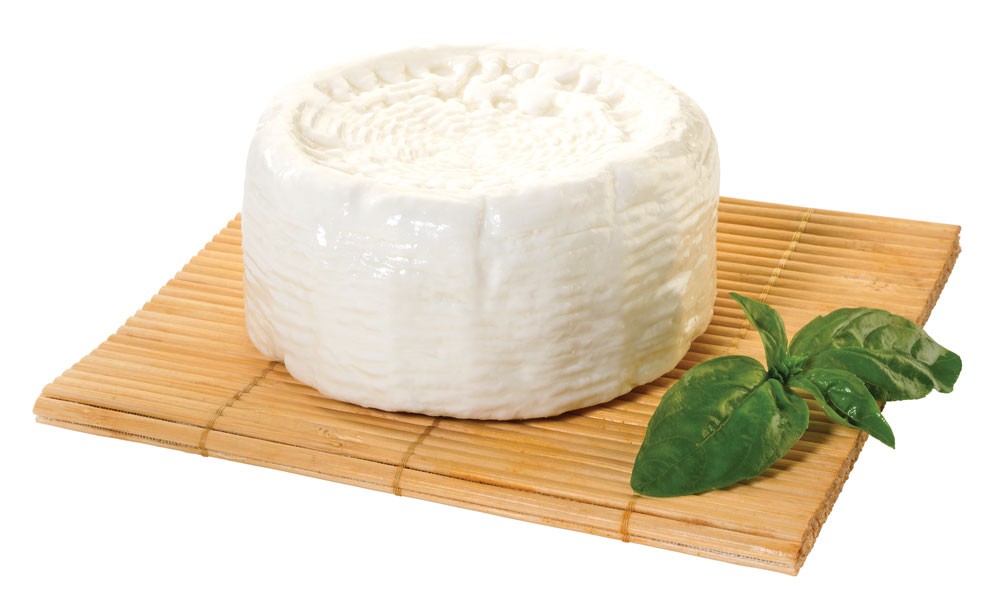 According to Dairy Farmers of Wisconsin (formerly known as the Wisconsin Milk Marketing Board), Italians first crafted ricotta to make use of their Romano cheese’s leftover whey: They cooked the whey until the curds rose, then skimmed and drained them, and ricotta was born. Ricotta’s versatility has kept it thriving today on menus here in the States. Its creamy white appearance, fine-grain texture, and mild sweetness make it an excellent complement in everything from savory to sweet applications.

Traditionally, it’s a staple of baked pasta dishes like lasagna, baked ziti or stuffed shells, as well as desserts such as cheesecake, pies, pancakes and cookies. But some operators are finding the perfect pairings on pizzas, too: At Paulie Gee’s in Brooklyn, New York, owner Paul Giannone matches the mild wonder with fresh mozzarella, Canadian bacon, sweet Italian fennel sausage and fresh basil on the Ricotta Be Kiddin’ Me pie. Bonus points: Paulie Gee’s adds the ricotta in dollops after baking the pie for added contrast—and offers a cashew-based ricotta to suit his extensive vegan menu.

TIP! Don’t overwhip or overprocess mascarpone when making frostings, dips or spreads; it will churn into butter and get lumpy. 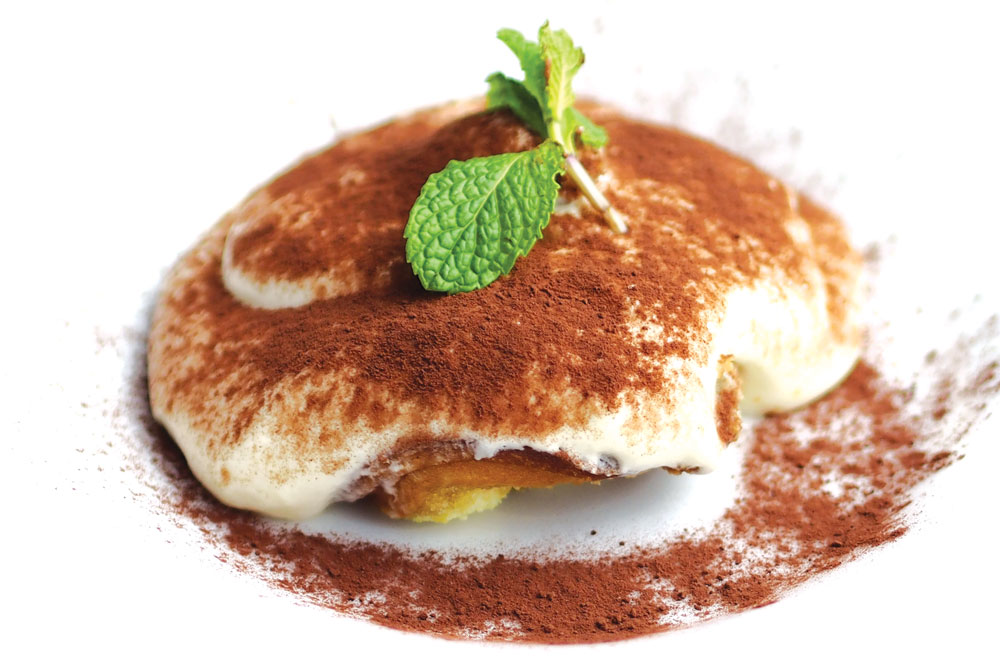 Mascarpone is perhaps the cream puff of soft cheeses, thanks to its 70% milkfat content and flawlessly creamy texture. It’s a rich and buttery selection with a hint of sweetness—perfect for topping fresh or cooked fruit for a relatively healthy yet decadent dessert, or for filling the layers of light-as-air tiramisu. But on the savory side, Trattoria Amici in Los Angeles has even found a way to work mascarpone into a soup, its Zuppa di Carciofi, which features pureed fresh artichoke hearts, topped with mascarpone cheese and served with Parmigiano-Reggiano dumplings. 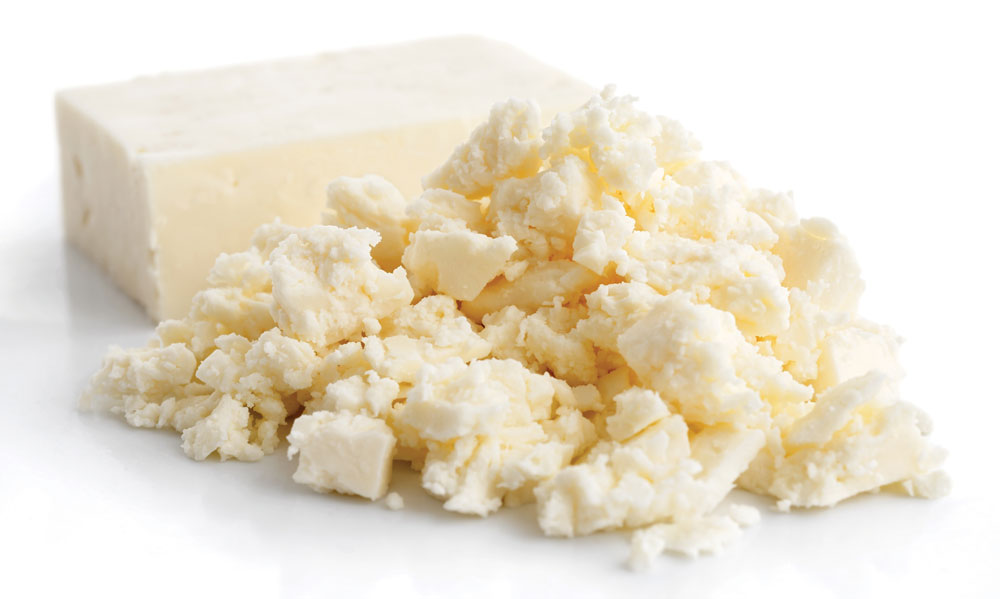 Pioneered in France, goat cheese, or chèvre, is made from goat’s milk. Although firmer, aged types of goat cheese also exist, softer versions are generally sold in block or crumbled form; the blocks tend to balance a slightly crumbly texture with smoothness and spreadability. At Osteria Marco in Denver, goat cheese is a perfect foil for sweet, spicy and salty ingredients on two hand-tossed pizzas: the Artisan, with olive tapenade, roasted red peppers, chili and oregano; and the Fig & Goat Cheese, with black mission figs, arugula and truffle oil. And Atlanta Magazine has lauded the Fried Goat Cheese appetizer at the three-location Ecco as one of the city’s best cheese dishes, describing them as “golden orbs” featuring a “light tempura batter…glazed in honey and dusted with cracked black pepper, giving an otherwise sweet starter a spicy kick.” The lesson: Tangy goat cheese stands up to a variety of similarly pungent flavor profiles. 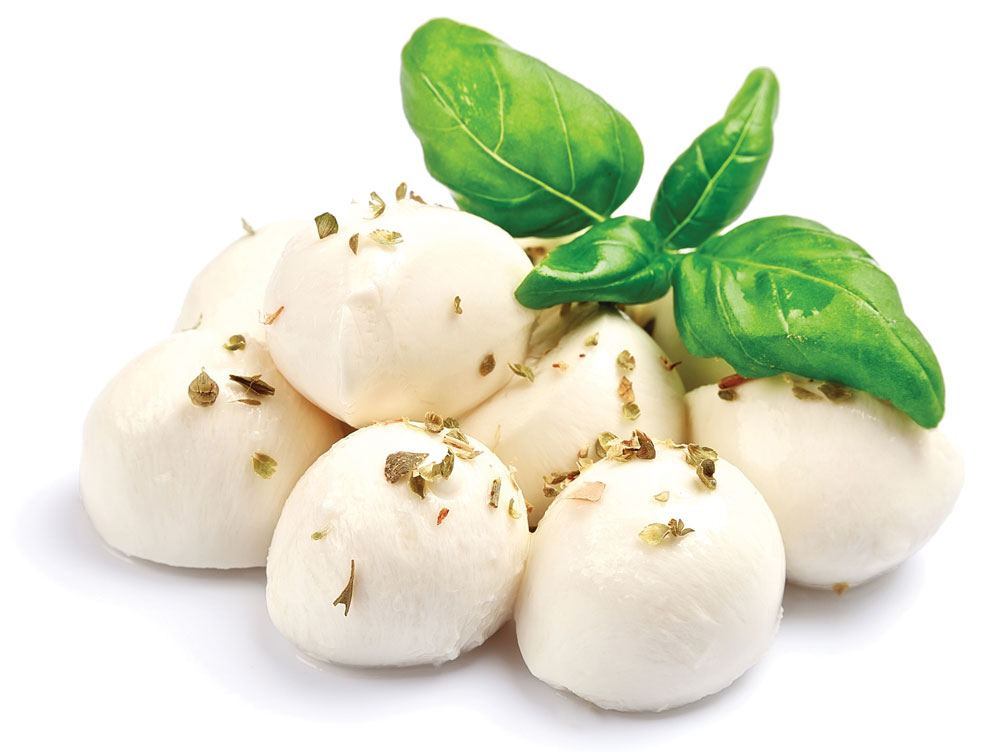 Mild and milky, soft and springy, moist and delicate in flavor, fresh mozzarella has long been a staple of chefs in Italy, where they often use buffalo-milk varieties, though cow-milk versions are popular Stateside. For consumption companions, look to fresh summer vegetables, juicy fruits, heirloom or oven-roasted tomatoes, and prosciutto. The classic caprese salad features mozzarella rounds topped with sliced tomatoes and fresh basil, then drizzled in extra-virgin olive oil and seasoned with salt and freshly ground black pepper; it’s an exercise in simplicity that nevertheless reaps a perfect combination of flavors. You can also serve the slices with baguette toasts and roasted red peppers, grilled eggplant or zucchini, or sundried tomatoes.

Clearly, with its neutral flavor, this staple can provide the ideal backdrop to virtually any array of tastes. PizzaHacker in San Francisco complements its mozz, hand-stretched in-house, with a rainbow of color, flavor and texture in the Rocket Man pizza, with arugula, garlic, a farm-fresh egg, lemon juice and chili paste (customers can also add a meat topping for an extra charge). 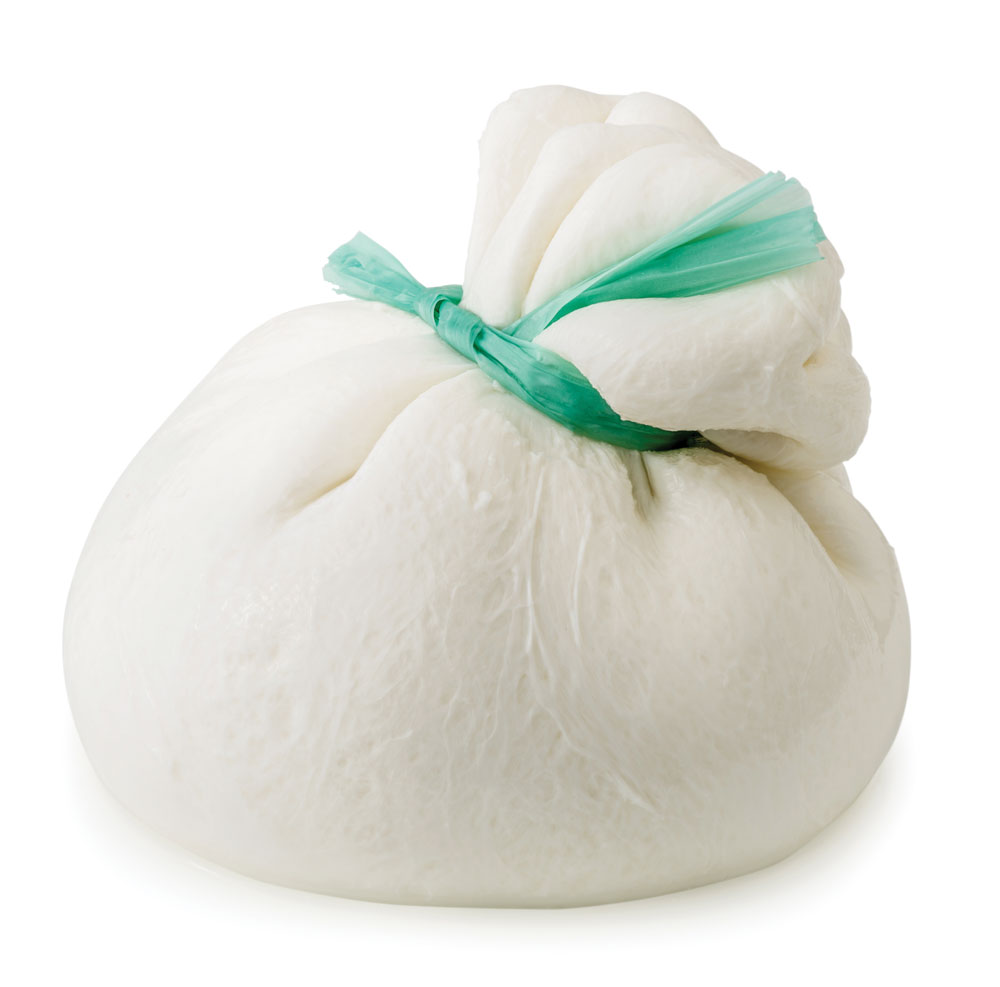 Don’t let burrata’s semi-soft exterior fool you; poke behind the thin, delicate shell, and a creamy, curdy interior awaits. Though decadent enough to stand alone—simply placed on a plate with standard accompaniments like herbs, olive oil, salt and pepper, or fruits and vegetables—it has now made its way to sandwiches, pizzas and even breakfast. In New York, Gothamist.com and New York magazine alike reported with drool-worthy detail on the Burrata French Toast at Trattoria il Mulino—described by the latter as housemade burrata atop “a thick piece of sugar-and-egg-coated brioche bread,” finished with a drizzle of blueberry-orange sauce. Indeed, burrata can pair with both sweet and savory ingredients: Try it with sauteed veggies like eggplant, lemony pea or fava salads, ripe peaches, or thick-sliced heirloom tomatoes drizzled in olive oil and seasoned with salt and pepper. 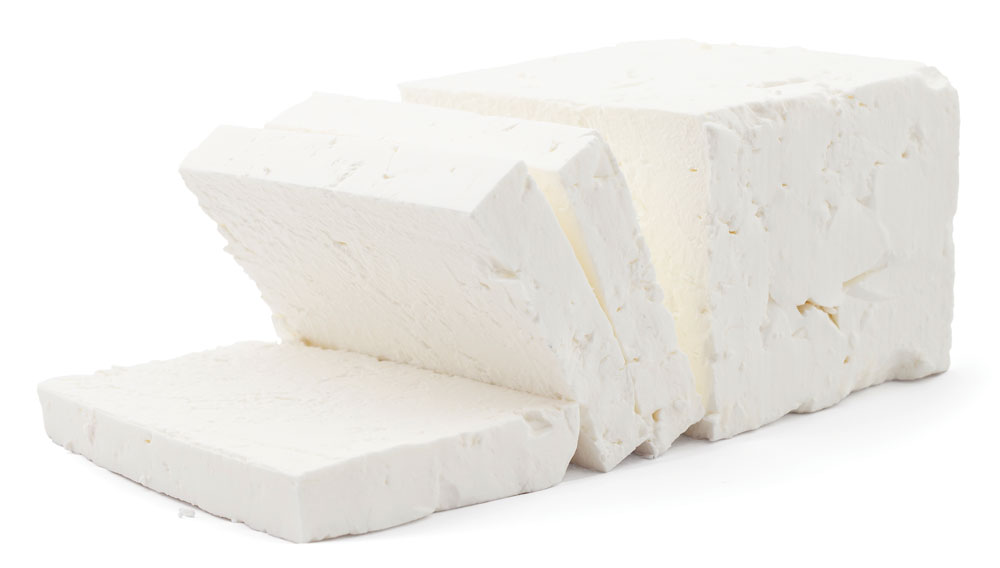 Tangy, salty feta can easily become a scene-stealer, but its telltale forward flavor allows operators to use it sparingly in a variety of dishes, including Greek and watermelon salads, cold and warm dips, and savory pies. Pair its crumbly intensity with olives, cured meats, dried or pickled fish, or heirloom tomatoes. Though it doesn’t melt like mozz, you can also serve it warm; bake or broil the cheese with olive oil and honey, accompanied with warm bread, breadsticks or pita. For a savory hot take, Mafiaoza’s Pizzeria & Neighborhood Pub, with three locations in Alabama and Tennessee, uses feta as a centerpiece of The Big Heat appetizer, which tops a hunk of the cheese with marinara and vodka cream sauces; the dish is then baked in a stone oven and topped with fresh basil for an indulgent, shareable starter. The cheese is normally sold in blocks or crumbles—choose the former when you’re looking for bigger chunks that need to hold up in your application.

This article was written with the assistance of the Dairy Farmers of Wisconsin (formerly known as the Wisconsin Milk Marketing Board).