“I think it is very important that the public knows who their chef is,” says Keith Yonker, corporate chef for Casa Restaurant Group and member of the U.S. Pizza Team. “The perception of a chef being an old guy who carries a big knife, wears a tall white hat and yells a lot has changed since we as chefs have began marketing ourselves to the public.”

Richard Ferrara, marketing manager for the oven company Marsal & Sons, Inc., says that having a famous chef is very beneficial to his business. Chef Santo Bruno is a big part of the marketing, Richard says. “At restaurant shows, we have booths where he cooks at our ovens. He shows how the ovens work and really puts on a show. His sense of humor and personality really draws a crowd.”

Keith says the marketing of chefs is now becoming a big thing since the Food Network has evolved. Marketing your chef to the public can put his or her name out and at the same time bring publicity to you restaurant. If your chef has originality, talent and a great personality, he or she can be a prime marketing tool. 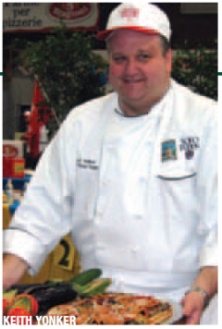 One way to turn your chef into a brand name is to put his or her name everywhere. Sofo Foods, who sponsored Keith for the U.S. Pizza Team, wanted to get as much exposure for him as they could. “We also knew that Sofo Foods would receive media [exposure] along with Keith,” says Angie Lazzaro at Sofo Foods. “Both were strong motivating factors for us. I mailed press releases, sent e-mails and placed phone calls to a wide variety of media (local newspapers, radio, TV and the mayor’s office…). I even tried national talk shows. In addition to media contacts, we also had chef coats, Sofo hats and shirts made up for Keith with his name and our logo along with his restaurant (Casa Restaurant Group) logo.”

Focusing and capitalizing on your chef’s creativity, expertise and personality is a great way to market him or her and grow your own “super chef.” Another good way to get the chef’s name out is to send him or her out of the kitchen and into the restaurant meeting the guests. “I sit with them, buy them dessert and wine and make a fuss over little kids,” Chef Bruno says. “And then I take my customers to the kitchen and give them tours to let them see it is clean. The secret to success is giving customers a lot of attention.”

But chefs need to go farther than the dining room to get their name out. It helps to go into the community and participate in cooking contests, festivals and restaurant showcases. “I do local competitions for charity such as Chefs on Stage—a charity for the local food bank—and the March of Dimes food stage,” Keith says. “I try to market myself as much as possible, using the media as well as networking with other businesses. Right now, I am working with a local radio station as their ‘consulting’ chef.”

While having a “super chef” can boost a restaurant’s image, any kind of chef can help in the marketing mix. “They can answer the questions we don’t know the particulars about,” Ferrara says.

While there are many benefits to having a well-known chef, some restaurants are reluctant to market them too much, especially in the case that the chef and owner are not the same person. “Casa Restaurant Group does not per se ‘market’ me, as they do their restaurants,” Keith says.