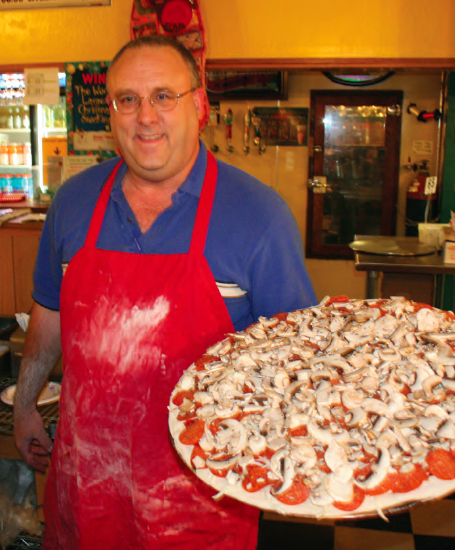 Randy Blair, owner of Pizza Party (formerly Pizza and Pipes) in Santa Clara, California, reveals his secrets to boosting store sales by $180,000 in one year.

How much do you allot for your monthly marketing budget?

I don’t really have a set budget, because a lot of the promotions are run at different times of the year and certificates get printed when they run out, etc. If I were to average everything, I probably spend about $1,000 to $1,500 per month.

How do you collect information from your customers to help your marketing efforts?

Throughout the year, we have contests in the store, such as “Guess the Weight of the Pumpkin,” “Guess the Number of M & Ms” and “Win the World’s Largest Christmas Stocking.” Customers fill out entry forms with their names, addresses and email addresses. The kids win the prize (M & Ms, stocking, etc.), while the parents win a pizza party for their family. Our cashiers also ask people to join our birthday/rewards club.

What do you do with the information you collect?

Around 40% of my customers provide their email addresses, so I’m able to send out periodic announcements about specials, etc. I also send out three or four direct mail newsletters each year.

What kind of traditional advertising do you conduct?

We don’t do any traditional advertising, other than a Yellow Pages ad for our catering service. I’ve tried it all and found that the return on investment is poor, and sales are hard to track unless the customer actually brings in a coupon. The only coupons we distribute are through the Entertainment Book and the Gift Check Book (we don’t pay for those).

What is the best business advice you can pass on to other pizzeria owners?

Make it easy for your customers to do business with you! Some of the ways we do this is by accepting expired coupons (it’s amazing how many restaurants will turn away business because of an expired coupon), accepting coupons from other pizzerias (we get 40 to 50 of these per month), and openly publicizing our 100% satisfaction guarantee (we even replace competitors’ pizzas if customers aren’t satisfied). We also try to make everything fun for customers.

What’s one of the ways you encourage customers to return? 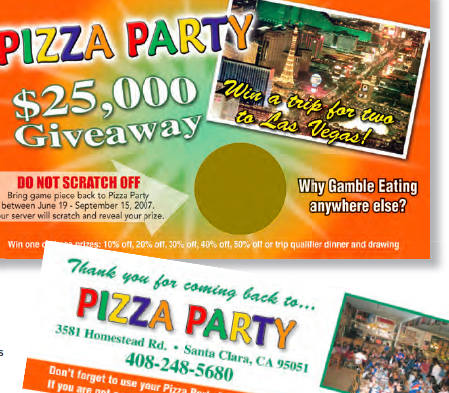 With all of the discounts you offer, how do you stay so profitable?

Believe it or not, our discounts account for only about 18% of our sales—a lot of the time, people forget to bring their coupons and certificates in to redeem. We’ve raised our prices each year, but we’re still in line with comparable restaurants.

Have you tried any new promotions lately?

We tried something new for the summer, since it’s usually our slowest time. We called it our 45th Anniversary Special. Customers brought a blue punch card with them each time they came in between June 15 and September 15. Anyone who spent more than $60 and made at least three visits got a $20 gift certificate.

What has been your most successful promotion?

Without a doubt, it’s been the Royalty Rewards program run by Restaurant Marketing Systems (RMS). In June 2005, my rent was going to increase by more than $1,000 per month, and if I didn’t something fast, I’d have to close the restaurant. In January joined as a Platinum Member and put my absolute all Thanks to the program and applying myself to it, I was take store sales from $640,000 to $820,000 in one year!

Can you explain how the program works?

Families sign up for a birthday reward program in which birthday cards are mailed out to members of the family on their birthdays. Our birthday card is a certificate for $10 off the next visit. We currently have 1,600 families signed up in the program; the system sends out more than 400 cards every month for us. This is a great way to stay in touch with our existing customer base, which a lot of businesses fail to do. Customers can also get a swipe card when they sign up, and each time they come in we swipe the card through a terminal that piggybacks off our credit card terminal and enter the amount of the purchase. That information is uploaded each night, and they mail out awards certificates when customers reach a prescribed spending amount. We currently award a $10 certifi cate for each $120 they spend. We also send out Thanksgiving cards with a gift certificate every year to the same database.

What is the “Red Envelope” promotion you run at Christmastime?

We hand out 3,000 sealed red envelopes beginning December 18 that customers bring in on their next visits. The envelopes certificate. February 28, which is a slow time for us.

Is it true that you give away a trip to Vegas every year?

Yes. We have a scratcher card that we hand out in May. Customers aren’t allowed to scratch it until they come in, but when they do, they win either 20, 30, 40 or 50% off their next orders. Some win a place as a qualifier for the Vegas trip. The discounts are good all summer long, and all trip qualifiers (there’s usually 20 to 30 of them) are invited to a dinner held in October. Names are drawn one by one from a hat, and the last name in the hat wins the trip. The people who don’t win still win goodie bags that contain prizes donated by local merchants.

How do you keep track of all your promotions?

We don’t hand out “Hurry Back” coupons when we have scratchers being handed out. We try to do just one promotion at a time, and we measure and record the progress of all of our promotions and discounts on spreadsheets so we can track their success. We track the amount of purchase and amount of discount, from which we can calculate net profit generated for each promotion. I also make a yearly promotions calendar and target slow periods such as summer.

How do you connect with your community?

We participate in a lot of fundraisers, team sports and walkathons. It’s important that we put ourselves in front of the “circle of influence.” I consider the “circle of influence” the people who are setting up the events—mainly moms—in our area. They are the decision-makers and are the ones we need to go to if we want them to consider utilizing our product for their next fundraising event, etc.

How successful are your fundraising efforts?

From what we can track, the fundraising cards that groups sell for $20 each brought in at least $39,000 in additional sales in 2006—this doesn’t include our portion of the sale price of the card, the money spent by the people the card purchasers bring with them, or the times they return without the card or after the card runs out, etc. We also do in-house fundraisers and off-site events where groups sell slices. 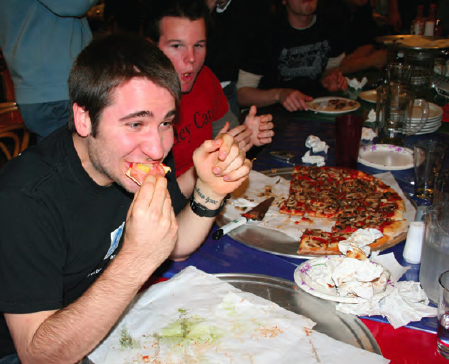 What is the Belly Buster Challenge, and how does it boost your business?

The Belly Buster Challenge is a contest in which an individual must consume a 20” two-topping pizza in one hour or less. They win a free extra-large pizza every month for one year, a free Belly Buster T-shirt and placement on our Hall of Fame wall. The customers love to cheer on the challengers, and everyone gets in on the fun. So far, only two people have been able to finish the entire pizza in the time allotted. One of those was Joey Chestnut, the hot dog-eating champion, who did it in 17 minutes. About 25 people have failed.

Do you have any other promotions you’re currently running?

We have a continuity program in which people sign up to have $16.99 deducted from their bank account each month, and in return they receive a $25 gift certificate. The idea behind that is that we have money automatically coming into our account every month. We just started, so only a handful of people are signed up so far; but I know one restaurant that has 100 members. We also just started a cold birthday mailing of 150 people within two miles of us.

Sales in 2007 were down for five reasons:

1) In late 2006, two other businesses geared toward birthday parties opened nearby.

3) The anchor grocery store in our strip mall closed for three months in the summer of 2007, and its replacement is struggling to build foot traffic.

4) In March 2007, we changed our DBA to Pizza Party after being known as Pizza and Pipes for 42 years. That move probably hurt more than I’d like to admit, but we haven’t had a pipe organ for 23 years, and rebranding has been part of our strategy for a long time.

Overall, I’d say 2007 has been a struggle, and if we didn’t have a large database and a good marketing system in place, we could have been knocked out of the market entirely. I really had to use all I’ve learned about marketing to stay ahead. Our newest target is corporate catering, which holds a lot of promise for 2008.