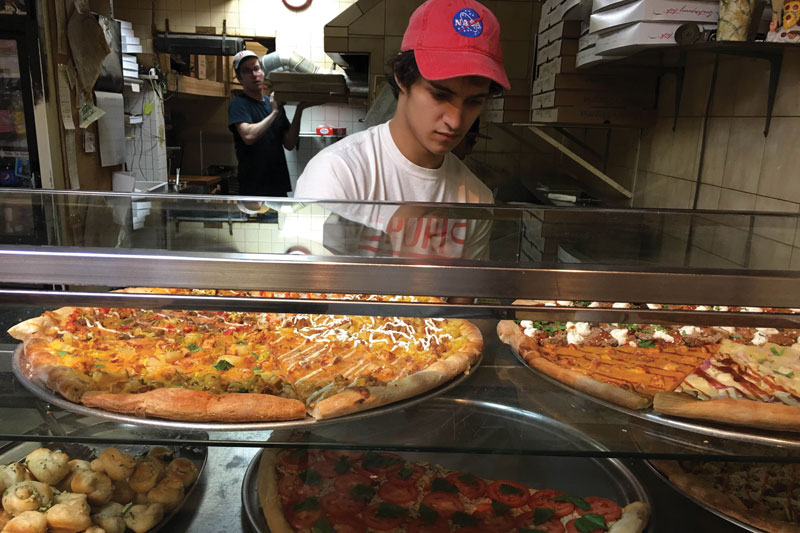 Pizza inside a box made of pizza. Mini pizzas on top of a larger pizza. A vast collection of more than 700 artistic boards featuring laugh-out-loud funny food puns and artwork celebrating American pop culture. Vinnie’s Pizzeria, in the neighborhoods of Williamsburg and Greenpoint in Brooklyn, New York, is quickly becoming recognized for its outside-the-box creativity that regularly garners media attention.

PMQ Pizza Magazine sat down with Vinnie’s co-owner Sean Berthiaume to learn about the inspiration behind his creative specialty pizza boards and what he believes every pizzeria must possess before media attention can create any real impact.

PMQ: How did you get your start in pizza?

Berthiaume: My business partners and I all worked as managers in pizzerias in Massachusetts throughout college. We were always promised our own stores if we worked hard enough, but nothing ever happened. Shortly after moving to New York, we had an epiphany that we should start our own place. We found a pizzeria in Williamsburg called Vinnie’s that had been there since 1960. It needed some work and already had several different owners. We took it over in 2007 and kept the classic New York recipe but also brought in our own specialty, vegan and gluten-free items. Two years later, we opened the Greenpoint location.

PMQ: Speaking of vegans, a lot of your menu is vegetarian- and vegan-friendly. Is that demographic a large percentage of your customer base?

Berthiaume: Yes. Twenty-five percent of the pizza we sell is vegan. We saw a lot of vegans at the last pizzeria we worked at, and we didn’t have anything to give them except a pizza without cheese. We made it our mission to cater to them at Vinnie’s. We have a lot of vegan friends and ask them for advice—listening to what they want and miss. A lot of the special boards incorporate veggie and vegan specials. 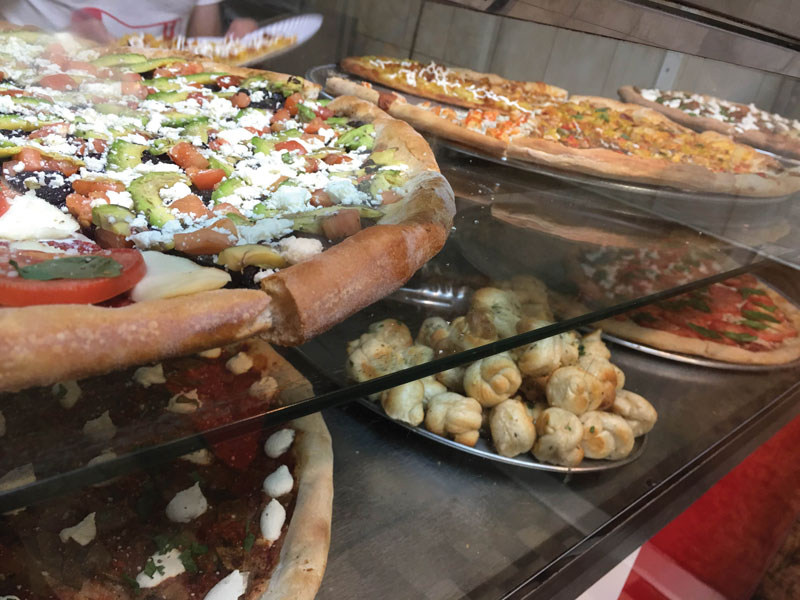 “Twenty-five percent of the pizza we sell is vegan. We saw a lot of vegans at the last pizzeria we worked at, and we didn’t have anything to give them except a pizza without cheese. We made it our mission to cater to them at Vinnie’s.”
—Sean Berthiaume, Vinnie's Pizzeria

PMQ: When and why did you start creating the daily special boards that have brought you so much attention?

Berthiaume: Once I wasn’t working 16-hour days anymore, I had a little free time to make the boards. I started in 2010, mostly for my own enjoyment and my customers. I’m one of those people who is always thinking of puns, so the specialty pizza names just come naturally to me. No one really paid attention to them until after a couple of years, when people saw how many were consistently posted on Tumblr. Then people started to take notice. I’ve done more than 700 now, and they’ve helped to grow our social media presence. Sometimes, I do them every day; other times, just once a week. It ties into our whole esthetic—we have employees and customers who are artists, and my partners are also artists. We try to be as creative as possible.

PMQ: Has one board attracted more attention than the others?

Berthiaume: I did a board that showed the monkey from The Lion King holding up a pizza. People were sending me pictures from pizzerias and bars that were copying it all over the place. There were even T-shirts being sold with the picture. It was flattering, but at the same time, people were also making money off of us.

PMQ: What’s the inspiration behind the boards?

Berthiaume: A lot of the time, I just want to draw something, and I create a special around it. Sometimes, it may be somebody’s birthday and I want to honor them, or I just feel like drawing a cartoon character from the '80s. Other times, maybe we just bought a lot of steak, and we want to run some steak specials. Creating the boards takes about three hours at home each night and is meditative for me. Since I do make them at home and bring them to the pizzeria the next day, I have to be careful with the delicate nature of the boards. There have been some accidents over the years—including the time my cat jumped on my board and erased it.

PMQ: Have you considered selling or giving away the boards?

Berthiaume: We’ve auctioned off a couple of the boards for charity, and I’ve given a few boards away. From a financial standpoint, the dry-erase boards can get pretty expensive. Besides, I like the idea of starting fresh each day with a new board.

PMQ: Your pizza on top of a pizza went viral and ended up on Jimmy Kimmel Live!. How did that happen?

Berthiaume: I didn’t plan on the pizza-on-pizza to be a marketing hit. Some things catch on, and others don’t. We try not to take ourselves too seriously. If I think something is funny, I’ll try it and make it a special. The pizza-on-pizza was shared so many times on social media that I started seeing it in memes in different versions. People said they heard about it on a radio station in Czechoslovakia. Jimmy Kimmel’s team picked up on it from all of that, plus he’s from Brooklyn. I’ve heard that he’s, like, obsessed with pizza and has his own pizza oven in his backyard.

PMQ: You also created a pizza box made of actual pizza. It received even more media attention than the pizza on top of a pizza. How do you come up with these ideas?

Berthiaume: Yeah, I was doing five interviews a week about the pizza-box pizza. The ideas really just happen naturally. I never stop working and moving. Whenever we get caught up, I like to try different things. I like to fool around and have fun. I’m so lucky that my business partners, Jacob Petrera and Henrik Toncic, let me run wild. They’re working their hardest, too; we all have our own strengths.

PMQ: How many orders have you received for the pizza-box pizza?

Berthiaume: We were getting dozens of orders in the beginning. Some people from other parts of the country just called to talk to me and ask questions about it. After a while, I was like, “OK, I need to get back to work now.” We tell customers that it takes 30 to 60 minutes to make the pizza in a pizza box, because it consists of three different pizzas made from scratch. If they get the regular cheese with a pepperoni pizza inside, it costs $40. If they decide to customize it, it’s $2 to $3 per topping added on to the price.

PMQ: Do these complicated pizzas slow down the pizzeria?

Berthiaume: Not really. We have great employees who stepped it up, made things right, and got everything out. They’re all happy for the attention, too.

PMQ: What kind of effect does the media attention have on the pizzeria?

Berthiaume: We see more tourists coming in now. We’ve had people come in and say they saw us on a TV show in Germany.

PMQ: You just started working with Marvel. Tell us about that.

Berthiaume: Marvel has a video series called Make It Marvel, where they’re going to restaurant owners and famous chefs to see what they can come up with that’s Marvel-like. They approached me, and we filmed a cooking video. I’m hoping we can do more.

PMQ: Do you feel any pressure to keep repeating media hits?

Berthiaume: I’d be lying if I said that I didn’t feel a little pressure. Whenever I do interviews, they always ask me, “What’s new?” or “What’s next?” I feel pressured when they ask me that.

PMQ: Is there a secret to going viral and getting the media to notice you?

Berthiaume: Being on TV shows for pizza is crazy. I’m proud when it happens for us. You have that feeling where you want to chase it and repeat it, but you can’t. It wouldn’t be happening if we didn’t already have a great product to start with. You have to have the food, experience and work ethic for customers to come back again after a big media buzz. We already have a great core pizzeria with loyal customers; we’re always busy. This is all just a fun bonus.