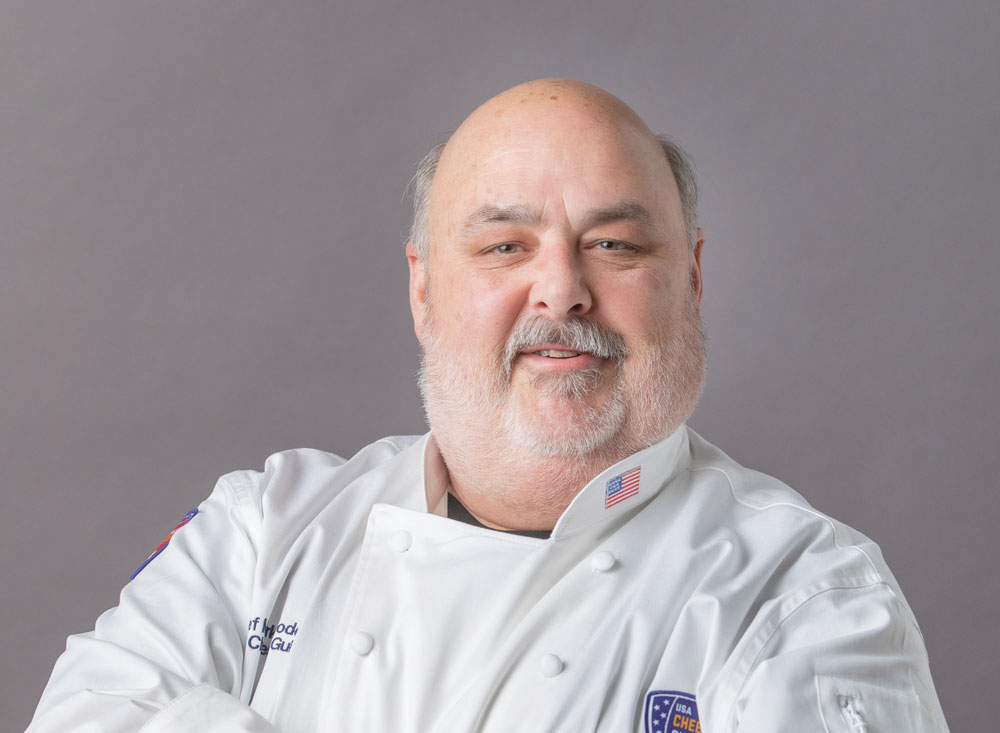 From soft to hard and sweet to salty, few pizza ingredients have a more diverse array of textures and flavors than cheese. It has evolved from different sources in different regions of the world since its discovery, and claiming to know everything about cheese is like claiming you’ve counted all of the stars in the night sky. But Mark “The Cheese Dude” Todd of Monte Rio, California, knows more about cheese than most.

Out of pure passion for the pungent product, Todd has dedicated his career to understanding the origins, flavors and textures of numerous varieties of cheese. And as a consultant for Dairy Farmers of Wisconsin, the California Milk Advisory Board and the U.S. Dairy Export Council, among many others, he has helped pizzeria and restaurant operators across the country make more “cheddar” with cheese. Wherever The Cheese Dude abides, you’ll get a master class in this most essential of pizza ingredients, so, naturally, we tried to milk him for all his secrets in this exclusive interview.

PMQ: Let’s start with the basics. What do we mean by “melt points,” and are they different for various cheeses?

Mark Todd: There are really two types of cheese. The cheeses that are made the old way, using acid and warm milk, do not melt. Then there’s the more modern way we make cheese, with rennet and starter culture—those will melt. In the newer production style, you have about three different [melt points]. Anything from semisoft up to whole-milk mozzarella will melt pretty well at around 130°F. The semihard cheeses, like Gruyère, cheddar and Swiss, will melt at around 150°F. Then you have your hard cheeses that don’t really melt, but they will get as soft as they’re ever going to get at about 180°F. But cooking with pizza is a different beast altogether. That becomes a mix of temperature and time as well as heating styles. The best approach is direct heat on the bottom and indirect heat on top, as most pizzaioli know. You can bake these pizzas at 500°F to 800°F, because the dough and the toppings allow the cheese to survive longer at those temps.

Related: Hike up your pizza’s “wow factor” with these unique cheese blends

PMQ: As far as baking, what’s the difference between part-skim and whole-milk mozzarella?

Todd: Most pizzerias use a blend of both, mainly because combining the two will improve the color, flow and coverage of a pizza. Part-skim cheese, because of its higher protein content and lower fat content, tends to brown more. Whole-milk mozzarella, with a higher fat content, will melt and flow beautifully, allowing for better coverage, but it will resist browning. And browning is truly what sets pizza apart from cheese toast. The browning of the proteins creates hundreds of new flavor components. 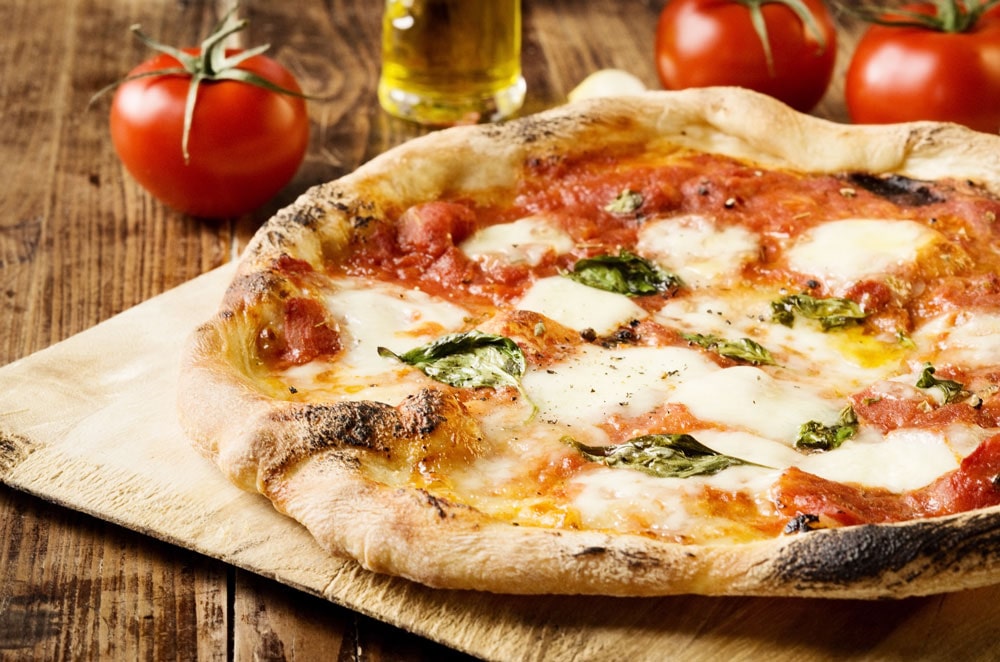 PMQ: Do you recommend using blends? Should you blend cheeses for cooking characteristics or for flavor?

Todd: Yes, and both! Blending is going to help you in the ways I just mentioned, but it’s also going to protect your pie from overbrowning without undercooking it. It’s the Goldilocks scenario—not too much, not too little, but just right. You get all the flavor of the browning with the elasticity and coverage of the whole-milk cheese. For a nice, authentic Italian flavor, you could go with 10% mild provolone, 10% aged provolone and 80% part-skim mozz. If you want the pizza to taste like it came out of a wood-fired oven, you could blend 80% part-skim mozz, 10% whole-milk mozz or Monterey Jack and 10% smoked cheddar or smoked mozz. For a little extra kick, I would consider about a 5% to 10% addition of blue cheese. At about 130°F, the enzymes that give the cheese that sharp flavor neutralize, creating a more earthy, robust flavor. The options are limitless.

PMQ: What about fresh mozzarella?

Todd: In general, if you’re going to use fresh mozz, however you will be cooking it, you will want to let it drain off overnight to remove some of the moisture, then cook with it the next day. It’s a great cheese to cook with, but you should cut it very thin. It’s best to cut it when it’s very cold, so it stays firmer and it’s easier to slice thin. But if you cut it too thin, you’ll end up with a swimming pool for your toppings.

“One factor that allowed [the Alps region] to produce cheeses that were designed to age was the fact that they had caves. When you have caves, you have natural refrigerators, which allows you to make cheeses and store them safely over the season.”
— Mark Todd

PMQ: What are your thoughts on making fresh mozzarella in-house?

Todd: It’s not for everyone. There are numerous additional costs that come along with it: first, all of the ingredients, and second, the manpower and labor costs. If a restaurant claims they are making fresh in-house mozz, I would put 1,000 of my favorite dollars down that they are buying frozen curds, then stretching it in-house. Someone else is basically making the cheese, and the in-house version is just the final step. That is called “pulling” mozzarella, and that is not “making” mozzarella. It’s not easy to do. It’s time-consuming, and any number of things can go wrong in the process. It takes years of practice to perfect, and it’s very easy to turn true fresh mozzarella into a hockey puck. It’s not something I would recommend for the average person. Practice that craft before you even entertain the thought of doing it in a working restaurant.

One final thought: Cheese is a 10-to-1 ratio. For every ten kilos of milk you use, you yield one kilo of cheese. Just make sure to factor in that math.

PMQ: Are there cheeses that you should apply to the pizza only after the bake?

Todd: There are cheeses you can add as a garnish after-bake. Any of the fresh cheeses work well, like fresh mozz or buratta. It’s not uncommon to throw blue cheese or Gorgonzola on afterwards to keep that intense bite of flavor we talked about earlier. Fresh Parmesan, Asiago or Romano also keep that intensity of flavors. Cream cheese and ricotta work well after-bake, too.

If you want to cook with Parmesan, perhaps add it on top of the sauce and bury it under the toppings. This will protect it from any direct heat and allow that flavor to seep into the pie itself. You can get several different flavors and characteristics from any type of cheese, depending on application and bake. It’s up to you to know what you are looking for, then apply your cheese accordingly for maximum results. 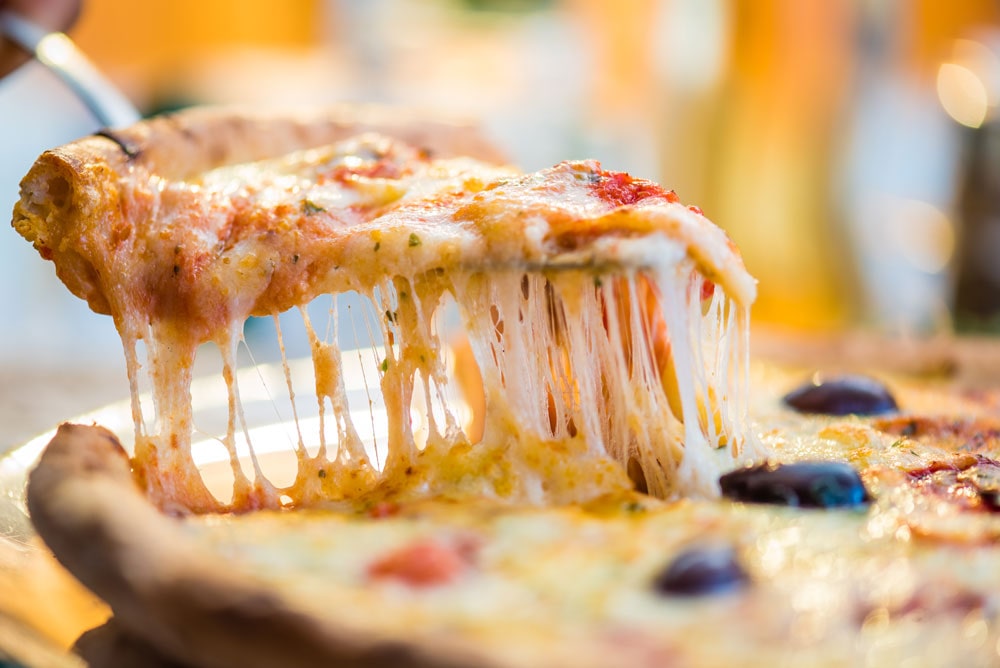 PMQ: Parmesan, Asiago and Romano are all very similar yet very different. Does that have to do with the regions or how they’re made?

Todd: Yes and yes. Are they similar? Yes. Are they completely different? Yes. You have to think about where they come from. The northern part of Italy is in the Alps. The Alps have been the Alps longer than the countries around them have been countries. Whether it’s Germany, Italy, Switzerland, Austria or France, the Alps as a region has been making cheeses for thousands of years. One factor that allowed [the Alps region] to produce larger cheeses that were designed to age was the fact that they had caves. When you have caves, you have natural refrigerators, which allows you to make cheeses and store them safely over the season. This is where cheese styles like Parmesan, Asiago and Romano originated. The biggest difference between Parmesan and Asiago, besides their specific region, is that Parmesan is a part-skim milk cheese and Asiago is whole-milk. Parmesan is always going to be harder, dryer, more crumbly, more grainy, whereas Asiago, even if it’s 10 years old, is always going to be creamier.

PMQ: What should a new pizzeria operator look for when choosing a cheese?

Todd: Decide who your target market is. Entry-level pizza fans or more affluent, seasoned pizza veterans? For a higher-end pizza, you want to have blends that give the desired melting and browning characteristics, but you also want to focus on the flavor. The people in that market are looking for more flavor in their product. I would use a 50-50 blend of part-skim and a flavorful mix of whole-milk cheeses. For the entry-level pizza eaters, you can go with a 75% or 80% part-skim mozz—because it’s the least expensive but will still give you a great brown—and 20% of a reasonably priced cheese that will give you a good melt and flow while imparting some flavor. Now, that’s not to say the entry-level market does not want great flavor, too, but you should think about quality as well as quantity and see where the scales lean for your particular market. The best answer is to meet in the middle for both markets. We all want the same high quality and flavor. It’s just a matter of how much we can spend as consumers.

One good tip is to keep your cheese blends separated by components. You can put down your base layer of whole-milk for your big flavors, spread and coverage, then add your part-skim afterwards to achieve optimal browning on top. This could save you money since you don’t need to use as much part-skim on top to achieve the same browning as you would if it was premixed with the whole-milk. It can also help you target both markets without using the same cheese. Adjust your recipes and create higher-end specialties while still offering the entry-level pies. Now you have both markets, and everyone is happy, and so is your bottom line. But the best mix, even separated, is still 50-50. Train your staff thoroughly as to why you do it this way. Make them understand the build, flavors and characteristics of each blend. You can create any blend, even if the components are separate, but you cannot separate a blend once mixed. [Keeping your blend components separated] gives you infinitely more control. Make the cheese work for you!

“Browning [of cheese] is truly what sets pizza apart from cheese toast. The browning of the proteins creates hundreds of new flavor components.”
— Mark Todd

PMQ: Does adding a layer of cheese underneath the toppings help keep them from sliding around the pizza, especially for pies with a lot of toppings?

Todd: It depends on the type of cheese you’re putting underneath and how fast it melts. If you overburden it with toppings, the odds are that the center will not get hot enough for long enough to melt, which defeats the purpose. But if you use a cheese that has a lower melt point and you don’t bury it, yes, it will melt and create traction on the pie to keep everything in place. If you’re going to add a sub-layer of cheese, make it one that melts easily, like a Monterey Jack or a whole-milk mozz. In general, I’d put it in the middle. Add a layer of toppings, then some cheese, then more toppings, then more cheese. This keeps the cheese closer to the heat source so it can melt through the ingredients and create that traction.

It also greatly depends on the types of ingredients. If it’s a veggie pizza, most of those ingredients contain a lot of water, which seeps out and creates a slip-and-slide. Again, as with fresh mozz, you should drain your ingredients for the night before use to keep this from happening. Don’t completely remove the moisture, but be aware that it will escape and can affect your pizza.

To see the entire live interview with The Cheese Dude, visit PMQ.com/MarkTodd.