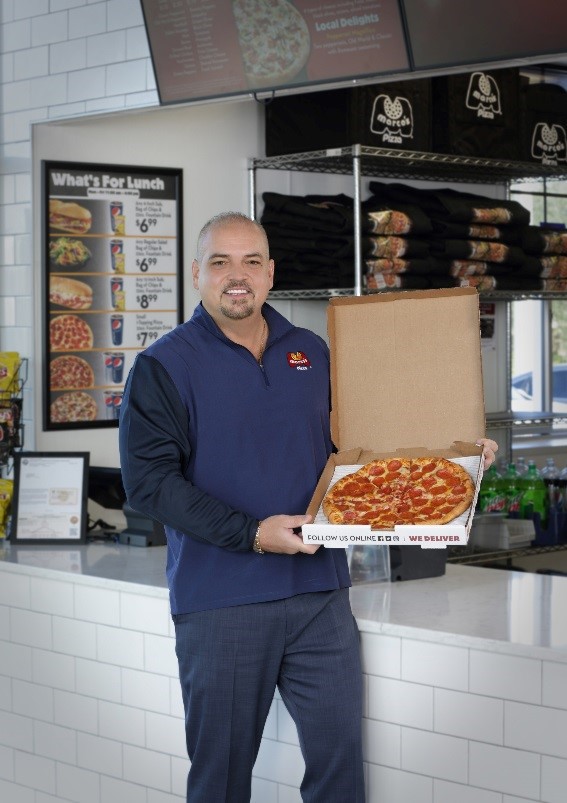 Marco’s Pizza, the nation’s fastest-growing pizza franchise, announced today the promotion of Chief Operations Officer Tony Libardi to President, effective as of the first of the year. The move comes at a pivotal time as the brand rapidly approaches the opening of its 1,000th store and celebrates its 40th anniversary year.

Libardi, a firm believer in the service profit model, will ramp up the company’s focus on people, product and process to uphold the brand promise and grow to new heights. Accordingly, Libardi’s Priorities will center on employee development, franchisee support, maximizing technology, and maintaining steady and rapid growth.

Key initiatives driving this new era of growth will include the addition of franchise advisory boards, an unveiling of a new restaurant prototype and a celebration of the brand’s Italian heritage as it approaches its 40th anniversary. Combined, these efforts will drive Marco’s larger mission of being the Pizza of Choice, Employer of Choice, and Partner of Choice in markets across the country.

“Marco’s Pizza is only as successful as the people behind the brand. As I step into this new role, my energies will focus on building future leaders at the corporate and store-level to accelerate our success in becoming a premier 1,000+ unit company,” said Libardi. “Our leadership team has built a culture of accountability vital to our growth. As we move forward, we plan to enhance this culture and encourage collaboration, unity, and trust among our franchisees, employees, and guests. When everyone grows together, we become an unstoppable force.”

Prior to joining Marco’s Pizza in 2014, Libardi spent 10 years running a $1 billion division for Burger King, leading a restaurant portfolio of 750 locations with combined sales of approximately $900 million annually as the Vice President of U.S. Company Operations. With nearly three decades of operations experience, Libardi will remain laser-focused on streamlining and simplifying internal processes while placing a strong emphasis on relationship building.

Jack Butorac, CEO of Marco’s Pizza who recently accepted the prestigious Golden Chain Award and Operator of the Year awards from Nation’s Restaurant News, said Libardi is the ideal leader to continue the momentum and legacy of Marco’s Pizza.

“I am confident Tony will be a driving force behind the continued success of Marco’s Pizza as we head into a new era,” Butorac said. “With a deep understanding of the Marco’s culture, he’s been responsible for upgrading many of our systems and culture. His commitment to the “people” element of our mission is authentic, and will be what keeps us strong and growing long-term.”

Opening a new store on average every three days, Marco’s Pizza is committed to a comparable pace in 2018 and aims to have 1,500 locations open by 2020. As the only national franchise chain founded by a native Italian, Marco’s Pizza has carved out a niche in the industry as the expert in authentic Italian pizza, known for its fresh never-frozen dough made daily on site, a proprietary cheese blend that is fresh never-frozen and a secret pizza sauce recipe.

Headquartered in Toledo, Ohio, Marco’s Pizza is the fastest-growing pizza company in the United States). Marco’s was founded in 1978 by Italian born, Pasquale (“Pat”) Giammarco and thrives by making Italian Pizza with fresh ingredients. The company has grown from its roots as a beloved Ohio brand to operate 900 stores in over 35 states and in four countries. Most recently, Marco’s Pizza was ranked No.38 on Entrepreneur’s Franchise 500 list, the lead spot for Pizza companies.  Other recent accolades include landing No. 2 on Forbes’ Top 10 Franchises to Invest In in the medium investment range, No. 3 on the Military Times Best For Vets list, No. 4 on the Franchise Times Fast and Serious list, and the No. 2 fastest growing U.S. chain on the Nation’s Restaurant News Top 100 report. To inquire about franchise opportunities with Marco’s Pizza visit marcosfranchising.com.