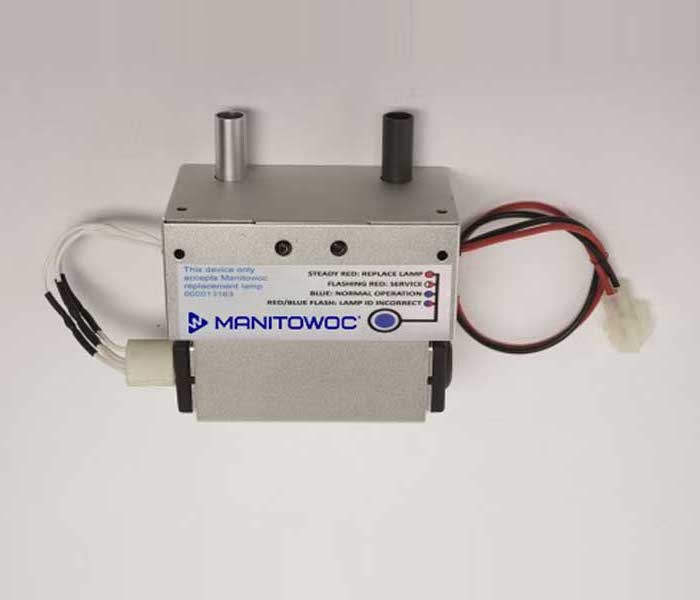 Manitowoc, a leading brand for commercial ice makers, offers LuminIce II, the only internal, fully integrated solution for guarding your ice machine against viruses and bacteria.

While cleaning and sanitation have always been critically important in the foodservice industry, business owners and operators often are not aware that bacteria can form in a cold environment, the company said in a press release. Luminlce II works around the clock using a combination of a germicidal-grade UVC light and UVV light to emit cold oxygen plasma into the ice maker’s food zone to defend against airborne viruses as well as inhibit the growth of bacteria inside the machine.

The device works by drawing air from behind the evaporator and passing it by a germicidal class 254 nm UVC light and sterilizing it. A 185 nm UVV light then acts on the oxygen and water vapor in the air stream as it passes by the bulb to create photo plasma. The resulting cold oxygen plasma is a gas that is ionized by UVV light containing ions, free electrons, hydroxyl radicals and ozone, each of which is highly reactive with the microorganisms it encounters in the food zone. This active air is continually recirculated within the food zone, inhibiting virus and bacteria growth.

In addition to guarding against viruses, LuminIce II inhibits the growth of bacteria inside the ice machine, allowing it to stay cleaner longer, the company says. Saving just one annual professional cleaning will result in savings of more than $1,500 over the life of the machine. The payback on the device is less than 18 months under these conditions, and the only consumable is the annual replacement of a UV bulb for less than $65.

Other benefits of LuminIce II listed by Manitowoc include:

The award-winning Indigo NXT, with its easyTouch display, provides a sanitation icon in the display, informing the end user that the device is working or that the bulb needs replacing. Additionally, a message will appear in the display reminding the owner to change the bulb after one year.

Luminlce II can be ordered pre-installed from the factory on 26 of the Indigo NXT models or added as a plug and play aftermarket kit. The device is available from Manitowoc distributors and is compatible with Neo, Indigo and Indigo NXT ice machines. For more information about LuminIce II, visit manitowocice.com.