Everything! They represent the four major generations that are employed today and are the people you rely upon to keep you in business.

Every generation has some unique motivational differences, which is your reason for concern. On the other hand, these four groups have many things in common such as wanting to be appreciated for the work they do. The differences lie in the things they want for themselves both personally and professionally. The more you understand about each of these generations, the easier your job will become.

Age and common experiences typically define a generation. For example, Seniors were born between 1922 and 1942. Common events that define them include World War II, the Korean War, Labor Unions and the “Golden Age of Radio.” This article is about how to successfully work with a diverse population that is defined by each generation (you fall into one of these categories too). 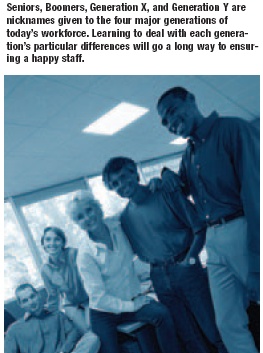 Let’s start with the 52 million Seniors since I’ve already mentioned them.  Some of you either are Seniors and/or employ them. These people lived through the Great Depression. They are a hardy bunch and are dedicated, hardworking and honorable people who traditionally respect authority. Most are conservative spenders and still don’t fully understand computers and technology; some simply don’t want to know and will tell you so. Many of them are working for extra income or because they found that retirement was boring.

The Boomers are the largest group of the major four. They account for roughly 73 million people born between 1943 and 1960. They are defined by the events of Civil Rights, the Space Race, The Pill, Women’s Liberation and the Vietnam War. This group is driven. They are generally optimistic, are concerned with health and wellness and are willing to go above and beyond when needed. Most, but not all of the people of this generation, have accepted new technology as a fact of life. Some are better at technical things than others. They often rely on Gen X and Gen Y to teach them how to use hardware and software.

Born between 1961 and 1980, this group is known as Generation X, Gen-xers, or simply X-ers. These people are defined by high divorce rates among their parents, AIDS, “Just Say No” (to drugs), and the Challenger Disaster. There are roughly 70 million Xers. They tend to be risk takers, independent thinkers, self-reliant and practical. They also expect to have fun at work!

Gen Y is composed of approximately 70 million people born after 1980. This population is still growing in size. Defined by the Internet, school violence, and Reality TV, they tend to seek immediate gratification. They hate being micro-managed. They are optimistic and have confidence in their ability to learn quickly. They demand perks and recognition from their employer, and if they don’t get these things they quit! 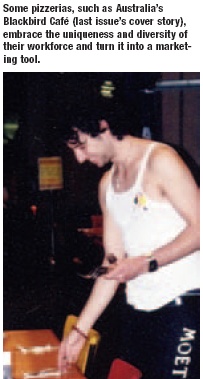 Your challenge is clear—how to successfully lead and manage each of these generations and still run your pizzeria. The solution to the challenge is not as clear. Your job is to successfully hire and manage people from each of these groups. If you are a Senior or a Baby Boomer owner or manager, you may even be experiencing what’s been called the generational jitters. The solution lies in understanding who all of these people really are—what makes them tick?

In managing Gen X, be aware that this group knows that many seniors and Boomers are highly critical of them. Their work ethic tends to be different from that of older adults. Their strengths lie in their technical skills and their thirst for knowledge. Traditional methods of supervision will quickly turn them off. Generation X is motivated by the following:

A manager who earns his or her respect.
Versus
Respect based on position as the owner or manager.

Freedom to challenge authority.
Versus
Being told what to do.

Being part of a highly motivated and committed team of people.
Versus
Loyalty to the owner or manager.

Opportunities for advancement based upon work performance.
Versus
Promotions based upon longevity.

Personal satisfaction with the job
Versus
401k programs; life insurance, stock options, and other perks.

Generation X wants to make a difference. They enjoy working on teams with teammates that they respect. They also expect to be meaningfully rewarded for their accomplishments. They tend to get set high goals for their personal financial success and are starting to realize that it won’t happen over night. Many Gen Xers have taken second or even third jobs to supplement their regular incomes. 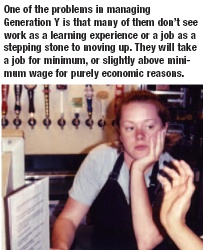 Gen Y is the fourth generation of employees that I mentioned earlier. Most of these people will hold minimum wage jobs until the year 2005 because of their youth and inexperience; something they are not particularly excited about. Money is important to them.  They are tired of working for peanuts. They are also seeking non-financial rewards. It’s interesting that this population is accustomed to being taken care of by their parents and teachers. Many of their parents have enrolled them in music and dance lessons, sporting events, boy/girl scouts, extracurricular school activities, etc. In short, their lives have been planned and managed for them since birth. In addition, this generation is sometimes viewed as gutsy and outspoken. They are sometimes in a job for only a few months and want to know when they are getting a raise and/or a promotion. Does this sound familiar? This is the kind of challenge that many of you are facing.

One of the problems in managing Generation Y is that many of them don’t see work as a learning experience or a job as a stepping stone to moving up. They will take a job for minimum, or slightly above minimum wage for purely economic reasons. Their hearts are not in it; they think nothing of walking away from a job despite the fact that you’ve invested time and money in training them. Loyalty—what loyalty? Generation Y is motivated by the following:

Individualized praise and recognition for a job well done.
Versus
A group or team “Thank you.”

More responsibility as a reward.
Versus
Being expected to do the same job without opportunity to learn more.

Flexible work schedule.
Versus
No time off to attend a concert, school dance, or sporting event.

Meaningful work.
Versus
“Don’t ask questions. Do it because I told you to.”

To be respected.
Versus
“I’m the boss here.  I know more about this than you do, so listen up.”

Critical feedback given in the helping spirit.
Versus
Criticism that hurts, devalues and alienates.

Managing Gen Y can be a challenge, especially if you are a Senior or a Boomer.  At times you may even feel like you’re overseeing the work activities of your children or grandchildren. That may or may not be what you had in mind when you hired them. However, research and experience has proven that mentoring Gen Y is an effective technique, especially if a Senior or Boomer is the mentor. Older adults tend to be viewed by Gen Y as intelligent due to age and life experiences. Gen Y and the seniors and Boomers are often more compatible than you might think.

Gen X or Gen Y is in Charge, Now What?

Let’s flip the coin. You are a Gen X or Gen Y owner or manager and you are responsible for hiring and supervising the activities of seniors and “Boomers” among others. They are more than twice your age—old enough to be your parent or grandparent. You’re thinking, “What do they know about people my age; how am I ever going to be their boss? We’re not even interested in the same things.  Where do I begin?”

Like it or not, most pizzeria owners are hiring and leading a diverse workforce. The more you know and are willing to accept about each generation, the more successful you will be. Trying to convert employees to your generation’s way of thinking is usually a losing battle. You are not a missionary working to convert the world to your religion. You are a professional with a business to run. This article only touches the tip of the iceberg in explaining the differences between generations and how to manage them. There are plenty of books and articles on this subject; I encourage you to read more.  But most importantly, get to know your employees as individuals, not as just a bunch of people on your organizational chart.