In today’s 24-hour news cycle, a pop music superstar can make headlines just by scratching her foot—if she’s wearing lingerie at the time and she remembers to take pictures. Mariah Carey went further than that, donning a camisole while firing up a woodfired oven to make pizza with her twin children. 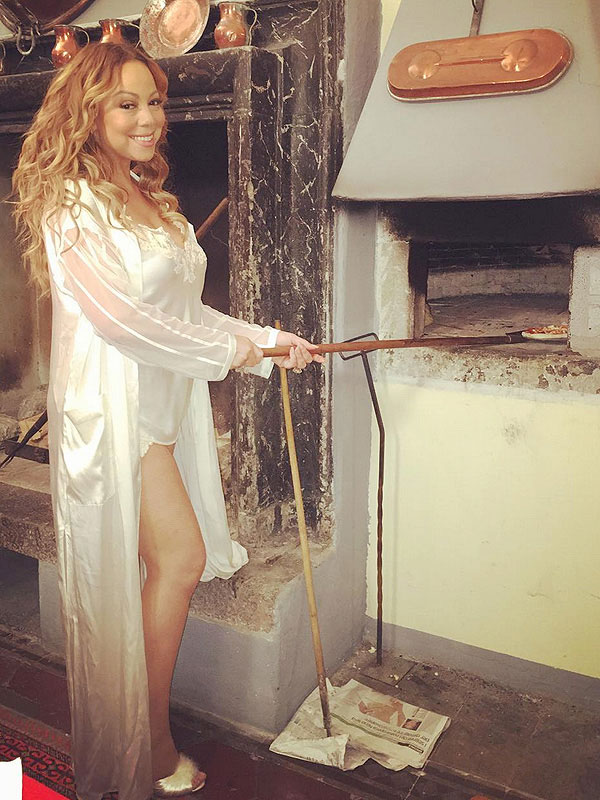 So let’s see. Beautiful woman in lingerie? Check? Cute kids? Check. Pizza? Check. Yep, all of the required elements to make the Internet’s collective head explode were there, and the result should come as a surprise to no one. The photos, which Carey posted on Instagram Sunday, have been picked up by media sites ranging from People.com, ET Online and MSN.com to the Huffington Post and PerezHilton.com.

As People.com reports, Carey is in Italy for her “Sweet Sweet Fantasy” tour. Staying in an eight-bedroom villa, Carey hustled her four-year-old twins into the kitchen and put them to work. The photo clearly shows a smiling Monroe rolling out pizza dough while Moroccan tops a pie with cheese and pepperoni slices. But what really started tongues wagging was Carey’s attire—no mom jeans, just a white silk camisole, floor-length kimono and matching heels.

Interestingly, Carey told the Sunday Times recently that she has lost weight thanks to a “bleak” diet. “My diet is very bleak,” she said. “I overuse the word because there is a lot of bleakness going on. My bleak diet is horrendous, but I don’t want to tell anyone about it because it’s none of their business.”

After all she’s been through, it sounds like pizza may be exactly the “sweet fantasy” that Carey has been singing about. And we’d say she’s earned the right to splurge a little.