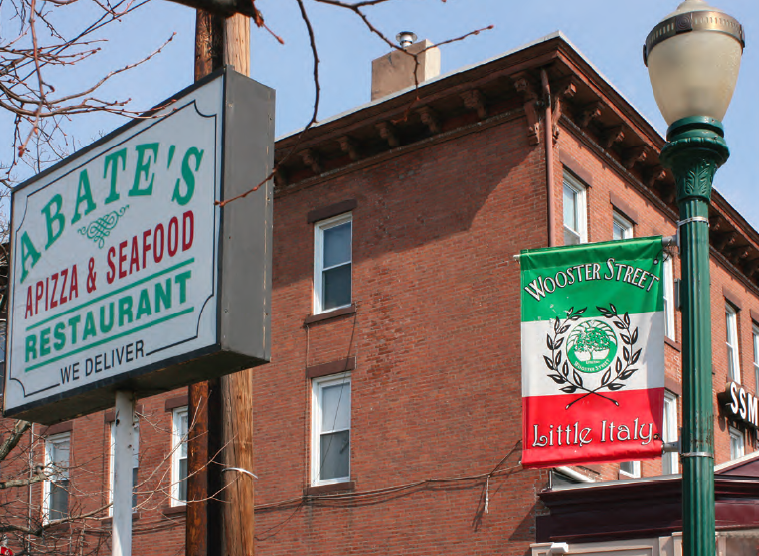 Anyone who has ever been to New Haven, Connecticut, fi nds out pretty quickly that there’s something special about the pizza you fi nd there. First of all, it’s not called pizza; it’s called apizza (pronounced “a-beets”), and there’s a huge sense of pride surrounding the creation of every pie that comes out of the ovens—some don’t even make it to the table if the pizza makers aren’t happy with the way they look.

Growing up in New Haven, Lou Abaté always knew he was going to dedicate his life to pizza. At the age of 12, he was already making pizzas full-time in his father’s pizzeria and, with the exception of a four-year stint as a professional magician with his own magic shop, has been a pizza maker ever since.

Abaté’s childhood dream was to own a pizzeria on Wooster Street. “My dad started his pizza business in 1956, and I used to ask him, ‘If we have the best pizza, why aren’t we on Wooster?’” says Abaté. “In my mind, if you were on Wooster, it meant that you had the best pizza in town.” According to Abaté, everyone who currently owns a pizzeria in New Haven is somehow connected to the original Wooster Street pizzeria, Frank Pepe’s. Abaté worked for Pepe’s son-in-law for a couple of years before opening his first place when he was 19 years old. In 1992, when Abaté decided to open Abaté Apizza & Seafood Restaurant in a Wooster Street location that had seen 12 restaurants open and fail in the span of nine years, his father warned him of the high turnover in the building and steep rent costs. He questioned his son’s plan and wanted to know what he would do differently to make the restaurant a success. Abaté’s answer was simple: work hard.

“I saw that the other pizzerias on the street weren’t serving lunch, so I served lunch,” says Abaté. “Then I made my restaurant family-style to suit all appetites, while others were only serving pizza. I also knew that no one on the street was delivering, so I delivered.” (To this day, Abaté is the No. 1 pizza delivery restaurant in the area and is credited for pioneering pizza delivery in the greater New Haven area in 1984.) “I had to literally marry my business,” he says. “After I helped to raise my daughters, I moved out of the house and into the restaurant, leaving a wife of 25 years who hated the restaurant business.” Abaté and his current wife, Loretta, presently run the restaurant side by side, living in the apartment Abaté built above the restaurant. 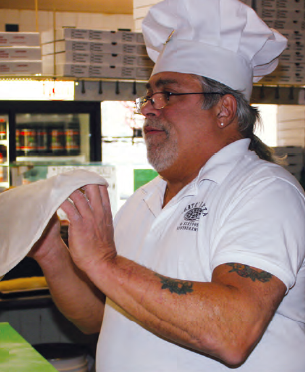 Any business usually has a pivotal point that turns things around or gives it the boost it needs to get the checkbook in the black. That day came for Abaté Apizza & Seafood Restaurant in October 1993. “The first year we were open was a real struggle,” says Abaté. “Then one day I got a call from the Secret Service saying that President Clinton wanted to come in for pizza. After that visit, my sales went up 40%. Everyone who came in wanted to know where the president sat. I always told them, ‘Right there, where you’re sitting!’”

While the president and the first lady didn’t eat their medium mozzarella at the restaurant, they did take it to go, and witnesses claim that Clinton said it was one of the best pizzas he ever had.

While everyone else in the area was serving solely pizza, Abaté decided to provide a full Italian menu so that Mom could come in and dine on linguine while Dad feasted on pork chops and the kids split a pizza. The menu is extensive and includes soups, salads, appetizers, pizzas, calzones and sub sandwiches alongside dishes such as homestyle lasagna, charbroiled chops, veal marsala, chicken piccata and stuffed lobster tails.

Best-selling pizzas include the white pizza with sauteed fresh spinach and garlic, and the meatball, sausage and bacon with mozzarella.

According to Abaté, only five to six people make a real Wooster Street apizza, he being one of them. “As the saying goes, it’s often imitated but never duplicated,” he says. Knowing that the style can never truly be duplicated, Abaté decided to divulge “the secret.” “Five elements go into a Wooster Street pizza,” he says. “They include method, process, formula, recipe and technique.” Of course, each element has its own variables, and each relates to one another. Factors such as dough weight, oven temperature, imported Pecorino Romano cheese and the amount of time the pies are left in the oven all play into whether you end up with the best pizza in the world or the worst. “In New Haven, we say our pizzas are well-done, and there’s an intentional pun there,” says Abaté.

On a street like Wooster, you have to stand out if you want to get noticed. After 15 years, Abaté says that he is now the No. 3 pizzeria on the street, behind Frank Pepe’s and Sally’s. And while he relies on a lot of word-of-mouth marketing and enjoys a thriving delivery business, the recent decline in dine-in patrons has led him to try some unique promotions.

Abaté decided to produce three commercials for a local television station. The first showcased what Abaté said was one of his most brilliant ideas. “If you can’t bring the mountain to Muhammad, bring Muhammad to the mountain,” says Abaté. Because of rising gas prices and a lack of parking on Wooster Street, Abaté bought an inexpensive limo and advertised that his staff would pick up patrons and bring them to the restaurant. And, yes, people have already taken him up on his offer!

The second commercial involved the use of a catchphrase Abaté wanted to start using for the restaurant. He found the perfect customer to pull it off: At the end of the commercial, he says, “Abaté is…ahhh…so good!”

The third commercial he named “Operation Pizza,” which he designed as a call-out to area residents to make donations to the local veteran’s hospital in support of the men and women who have fought for our country. Abaté also made weekly deliveries of pizzas to the veterans to show his support. The television station that aired the commercial was so impressed with Abaté’s philanthropy that it decided to run the ads for free!

Regardless of his new marketing efforts, Abaté still credits word of mouth as his best marketing tool. And judging by those in New Haven who have dubbed him the hardest-working pizza man on Wooster Street, those efforts are apparently working in his favor.