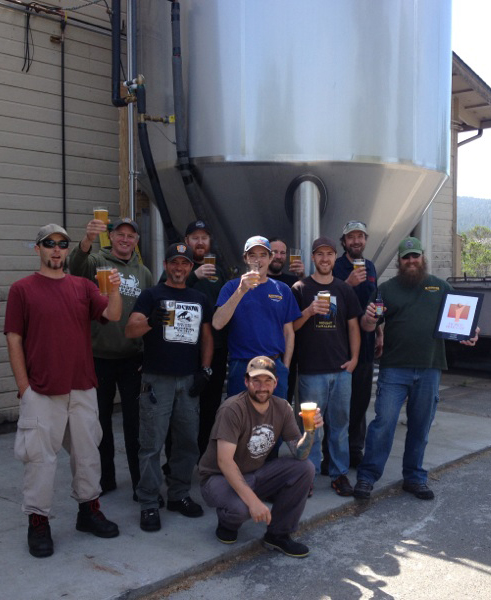 Mad River Brewing claimed a bronze award in the 2014 World Beer Cup, a global beer competition that evaluates beers from around the world and recognizes the most outstanding brewers and their beers. The 2014 competition was more competitive than ever—4,754 beers were judged.

Gold, silver and bronze awards in the competition’s 94 beer style categories were presented April 11, 2014 during the World Beer Cup award ceremony at the Hyatt Regency in Denver, Colorado.

Competing against 67 entrants from around the world, Mad River Brewing Company was awarded a bronze award in the Golden or Blonde Ale beer style category for its Flagship Ale, Steelhead Extra Pale Ale. "I raise my glass high to our production crew at Mad River. Our dedication to excellence, everyday, has set a consistent benchmark for the USA and the world for craft brewed ales of the highest quality." says Dylan Schatz, Head Brewer.

Steelhead Extra Pale Ale is a golden hued ale of medium body with a subtle floral hop character and very mild bitterness. Steelhead Extra Pale was the first beer to be released by Mad River Brewing in 1989 and has continued to take awards for 25 years. Most prestigious of those awards includes two Gold Medals and two Silver Medals in the Golden or Blonde Ale category from the Great American Beer Festival® held yearly in Denver, CO., as well as 2014 being the second World Beer Cup award in a row. Mad River Brewing is a 15,000-bbl microbrewery located in the small, riverside town of Blue Lake, California that specializes in handcrafting world class, Fine Ales in small batches.

“It is an honor to receive a second World Beer Cup award this year.  We are delighted that our Extra Pale Ale continues to be a favorite of our customers” says Charlie Jordan, CEO of Mad River Brewing Company.

World Beer Cup winners were selected by an international panel of 219 beer judges from 31 countries. Regarded as the “Olympics of Beer Competition,” the World Beer Cup saw an impressive field of 4,754 entries from 1,403 breweries in 58 countries.

Presented by the Brewers Association, the World Beer Cup has been held every other year since 1996, to celebrate the art and science of brewing by recognizing outstanding achievement. For more additional information, visit the World Beer Cup website.

Located in Humboldt County, California Mad River Brewing Company, producers of Steelhead and Jamaica Brand Fine Ales have been practicing the most traditional brewing methods for 25 years. Mad River Brewing Company is long on tradition and continues to handcraft their ales in the truest sense; hand stirred one batch at a time. Mad River’s flagship, Steelhead Extra Pale Ale and their other award winning brews have become renowned nationwide for their unique flavor profile and consistent quality through dedication to the breweries mission, “to produce the highest quality craft beer possible”. Now in our third decade, we continue to pursue outstanding ales which transcend boundaries and expand the art of brewing.