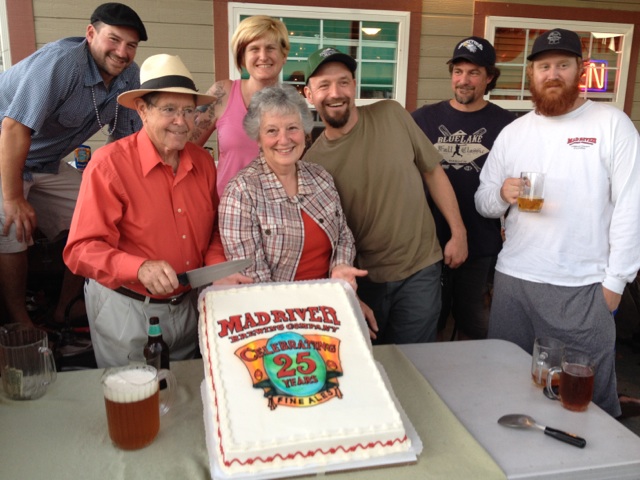 Mad River Brewing Company celebrated their 25th Anniversary of brewing great beer right here in Humboldt County with a day-long party at the Tap Room and Beer Garden on October 4th! Over 500 people attended the event, which featured brewery tours, a performance by Samba Na Chuva and live bands that played well into the night.

Beer lovers were waiting at the door before the Tap Room opened at 11:30am to be the first to experience the limited 25th Anniversary Release of Mad River’s Old Ale. The Old Ale is the first of Mad River’s Fine Ales to be produced in a 22oz bottle. Limited Edition, Brewmaster-signed bottles of the Old Ale went on sale the morning of the 4th and are still available in the Tap Room.

The Old Ale was one of four special releases for the day. Three past Anniversary Ales were released from their archives: a Double Brown Ale from 2010, a Imperial Chocolate Oatmeal Stout from 2012 and a Bourbon Barrel Aged version of the 2013 Belgian Style Quadrupel.

"We had one of our biggest days ever at the Tap Room. We had so many wonderful people come in Saturday to celebrate with us!" said Gini Noggle, the Tap Room Manager. "We couldn't have had a nicer day. Everyone was just happy to be having a beer out here in sunny Blue Lake."

The milestone celebration was perfectly timed as the brewery’s marquee event for Humboldt County Beer Week, a celebration of all locally produced craft beers. Humboldt Beer Week began on Friday, October 3rd and will continue through October 11th.

Mad River’s Tap Room will be home to a variety of beer themed events and tastings throughout the week, including a pairing with Cypress Grove and Boujie Baking on Thursday, Oct. 9th, and of course, proudly slinging beer to thirsty attendees at Hoptoberfest in Perigot Park in Blue Lake on Saturday, October 11th.

It has been a long and celebratory year for Mad River as they continue to expand all areas of the brewery. In early Spring they prepared for a new full-time release, the Flor de Jamaica (a hibiscus infused golden ale), by bringing in a new 200bbl fermentation tank in order to keep up with demand. In March the Tap Room and Beer Garden saw the largest transition in the company with the addition of a kitchen that serves pub grub, specialty plates and football brunch during the fall.

"I would like to extend my deepest thanks and appreciation to our customers over the last 25 years. It is your support and passion for our beers that has kept us going and without you, we wouldn't be here today. Cheers!" Dylan Schatz, Brewmaster.

Located in Humboldt County, California, Mad River Brewing Company, producers of Steelhead and Jamaica Brand Fine Ales, has been practicing the most traditional brewing methods for 25 years. Mad River Brewing Company is long on tradition and continues to handcraft their ales in the truest sense; hand stirred one batch at a time. Mad River’s flagship, Steelhead Extra Pale Ale, and their other award winning brews have become renowned nationwide for their unique flavor profile and consistent quality through dedication to the brewery’s mission, “to produce the highest quality craft beer possible”.