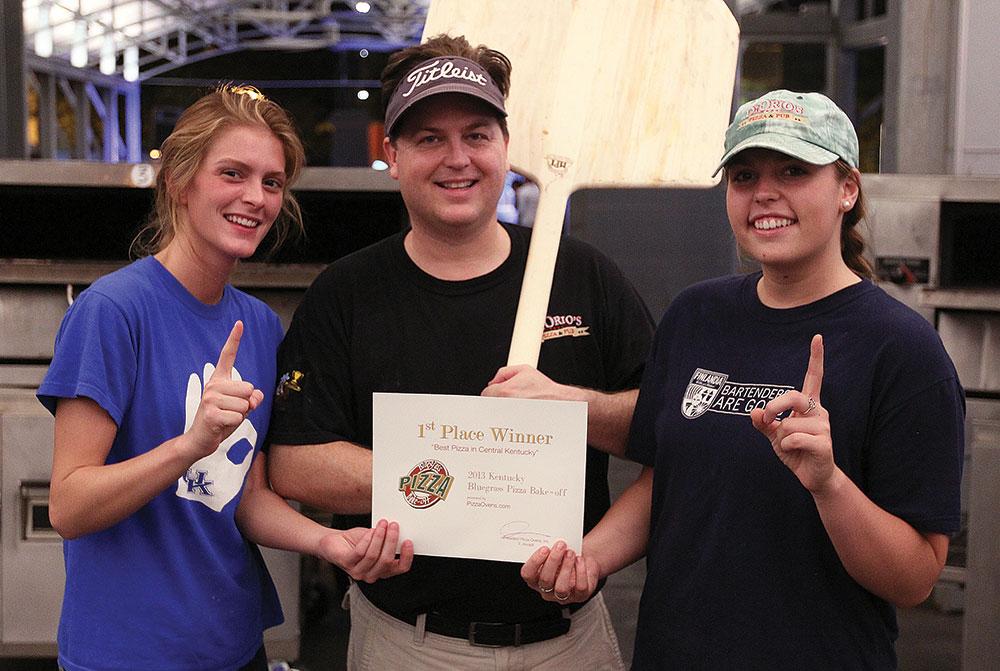 The Kentucky-Louisville college football game may have been the hottest ticket in town, but it wasn’t the only heated rivalry unfolding in Lexington back in early September. Pizza makers from Kentucky’s two largest cities staged a showdown of their own at the fourth annual Bluegrass Bakeoff on September 10—and it was delicious.

Standing outside in cool, breezy weather in downtown Lexington, nearly 700 people came out to enjoy good pizza, Kentucky Ale brew and live music by the band Superfecta. Meanwhile, it was Lexington vs. Louisville in the fight for the title of best pizza in the Bluegrass State. And just as the Louisville Cardinals prevailed in Commonwealth Stadium, a team of pizza makers from DiOrio’s Pizza & Pub in Louisville took home top honors in the bakeoff. The team, led by owner Vic DiOrio, won with a pie called Aaron’s Heat and Sweet, a pesto-sauce pie with spicy sausage, jalapeños, sweet red onion, pepperoni, and basil covered in fresh mozzarella.

As the first-place winner, DiOrio earned a spot on the U.S. Pizza Team and is eligible to compete with the team in the World Championship of Pizza in Parma, Italy, next spring. Spaulding has previously won the Bluegrass Bakeoff and has been a member of the U.S. Pizza Team for several years.

A total of 20 competitors vied for the title in the Bluegrass Bakeoff. Event sponsor Pizzaovens.com teamed up with food supplier Presto to bring the ovens and other needed materials for the pizzaiolos. The competing pizzerias brought their own toppings and sauces for their pizzas.

Pizzaovens.com began the competition four years ago to tie into the big in-state rivalry football game, and he soon learned that the competition was fierce. For Fash Asvadi, owner of PizzaOvens.com, it’s less about making money than about helping the community by bringing together sponsors and pizzerias, to create an event that gives back to local charities. The Lexington Humane Society was the natural choice for Asvadi, while partner Presto, a food supplier, chose Ronald McDonald House. The partners ended up raising nearly $5,000 for the two charities.

“Tuesday night is not too busy for pizzerias so they can all attend, and it typically takes place on the week that the University of Kentucky plays Louisville, so there is a passionate intensity about who is going to win—Louisville or Lexington,” Asvadi says. “The objective is to bring pizza operators together and try to help some of the local charities in the process.

“It takes a lot of people to organize it,” Asvadi adds. “This time around, we had about 40 people, including volunteers, helping us out. I started planning this maybe six months ago. It is a lot of work, but my passion is to put projects like this together. It is one of the things I really enjoy doing—while, in the process, helping charities. I don’t think you can put a monetary value on how much business this brings us. The objective is to have a nice, fun, competitive evening and help whoever we can as much as we can.”

With a slightly changed format this year, the competition’s judges chose the top four finalists before moving into the final round to determine the best of the best. Two of the finalists, DiOrio’s Pizza and Pub and Papalinos, are family-owned businesses located just down the street from one another in Louisville, but the owners say they’d never really had a conversation before the Bluegrass Bakeoff. “Papalinos is a block down from us and is a really good pizza restaurant, but it is different from ours,” DiOrio says. “They’ve won all kind of awards. It was nice to get to talk to [Rosenberg] for a bit.”

DiOrio says he had doubts whether his team could pull off a victory this year. “We won in 2011 and then didn’t place in 2012,” he says. “Everybody there had a pretty good pizza. A lot of times it really comes down to the ingredients you buy. There absolutely is a difference in quality product.”

DiOrio’s opened three years ago when Vic and his brother decided to get back into the pizza business after a short hiatus. They had owned a couple of popular pizzerias, Gevito’s Pizza, in Atlanta, for about 12 years before selling out and changing careers. They recently opened their second store in The Highlands in Louisville.

“Everybody pitched in and opened it,” DiOrio recalls. “We have a lot of family, so the younger generation comes in and helps. It makes it a lot easier to work there. Some say you can’t work with your family, but I actually enjoy it.”

For this year’s competition, DiOrio worked with his two nieces, Rachel Williamson and Candace Cochran. Meanwhile, Rosenberg partnered with his son, Dustin Hernandez. The two also work side-by-side at their pizzeria daily. “This was our first time competing,” Rosenberg says. “His sister works there too, but it is just the two of us today.”

Like DiOrio’s, Papalinos participated in the Bluegrass Bakeoff at the request of John Harrison, sales manager at Presto. “Presto helps us out so much that we had to give it a shot,” Rosenberg says. “It’s a little hectic but fun.”

Harrison says Presto’s work with pizzerias in the region led to the company becoming involved in the Bluegrass Bakeoff. “I think it’s a great showcase to compete in because it’s about independents,” he notes. “Anytime independents can get the accolades for being the ‘best of’ in a competition, it’s a good award to have on your menu. The pizza community is a tightknit group. It’s competitive, but all of our customers are competing against Papa John’s and Little Caesars, so whenever we have an opportunity to push the independent businesses into the spotlight, it’s great.”

DiOrio says he is excited to travel to Italy as a member of the U.S. Pizza Team next spring. “I don’t know what I will be doing for the team, but I can toss dough out very quickly and fold boxes fast. You learn to do stuff very quickly in a high-volume restaurant,” he adds with a laugh. “But it is cool that the sponsors do this kind of thing and help bring awareness to pizzerias. There need to be more competitions like this out there.”