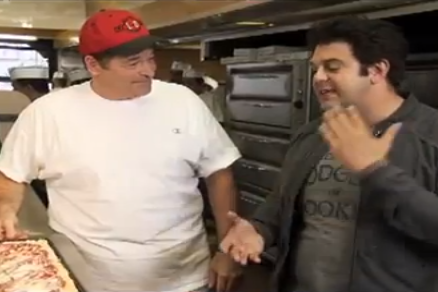 Louis Barbarti with Adam Richman, host of Man vs. Food. The family shared this screenshot on their Facebook page.

On June 30, 2016, a person darted out of bushes and shot Louis Barbati as he pulled into his driveway after a long day of slinging pizza.  It was a tragedy akin to the assassination of Gianni Versace in 1997 — killed just outside their homes by lone shooters, leaving behind a long and dark mystery to unravel.

This week, the Brooklyn Supreme Court will hear the defendant Andres Fernandez plead otherwise. “It’s been three years. The federal government and the New York City Police Department still can’t say why this happened. And more importantly, they can’t say why my client would do something like this to Mr. Barbati,” said Fernandez’s attorney Javier Solano to The Post.

The Brooklyn district attorney’s office agreed to drop the charges of attempted robbery and first-degree murder to second-degree murder and criminal possession of a weapon.

Curiously, the day Barbati died, he was adorned in jewelry with $10,000 in his pockets along with some bread in a bag — all left untouched.  And so the mystery began.

As the grandson of Ludovico Barbati who founded L&B’s in 1939,  featured in the Pizza Hall of Fame, the late co-owner was a proud torchbearer to the pizza legacy as the co-owner of L&B Spumoni Gardens.

“Lou was basically the face of the place. He was just this big, friendly guy who was always happy. I never saw him without this amazing love for that business,” said Tony Muia, founder of the pizza tour company Slice of Brooklyn Bus Tours.

But in 2009 two crime families clashed over a pizza recipe.  Barbati accused Eugene Lombardo, whose sons previously worked at L&B, of stealing the family recipe when he opened The Square pizzeria across the bridge in Staten Island. Lombardo was allegedly affiliated with the Bonnano crime family.  Barbati knew an ex-husband of a former L&B’s co-owner that had connections to another crime family. Two Colombo family associates, Anthony Russo and Frank Iannaci, then visited Lombardo which resulted in a shouting match and Iannaci slapping Lombardo.

Tensions sky-rocketed and a mob associate called for a meeting between the Columbo and Bonanno families at a Panera restaurant. “The Columbos demanded a share in (Lombardo’s) restaurant or a $75,000 payment for stealing the recipe,” the Daily Mail reported in 2012. Eventually, Lombardo paid $4,000 to Columbo family members.

Guerra was later charged with extortion and faced trial for his role in the feud.

However, news outlets at the time did not connect Barbati with either of the crime families outside of the pizza recipe quarrel. Could the shooter, who took neither his jewelry nor his cash but instead his life, have served frosty revenge?  Answers to that likely won’t rise, but the trial will determine whether the suspect shot him in cold blood or out of sheer panic from failing to rob him — if he is indeed the murderer.