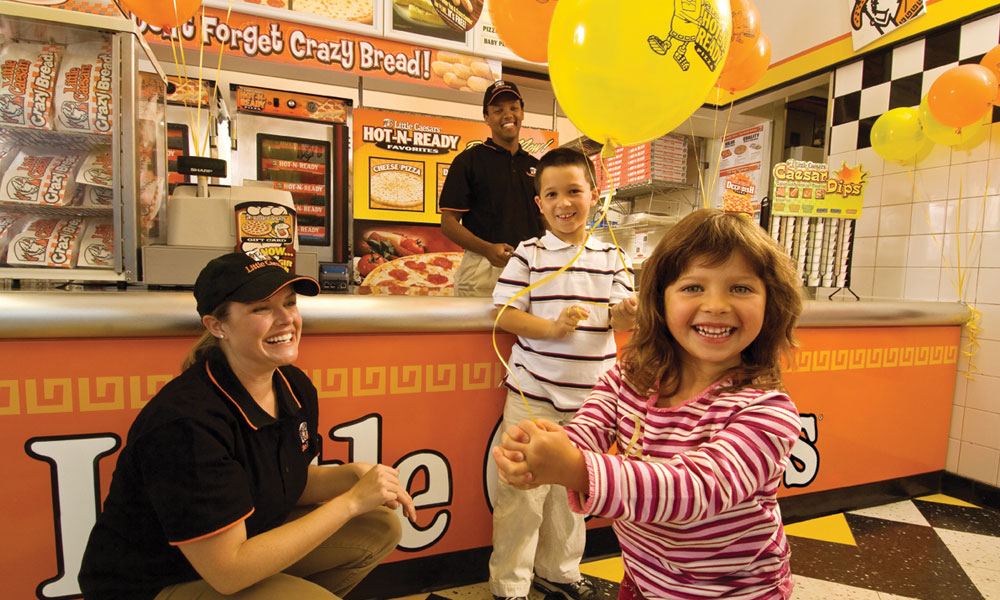 Last month, we announced Little Caesars Pizza (littlecaesars.com) as the winner of PMQ’s annual Pizza Industry Enterprise (PIE) Award. We’ve been observing the company for years as it supported millions in need, helped veterans open their own businesses and organized local youth programs, all while providing quality, value and convenience to its customers. Additionally, our Annual Reader Census this year revealed a trend that is uniquely tied to this ever-growing chain. Reader statistics showed that the carryout segment enjoyed the largest sales increase in 2012 compared to other dining options, including dine-in and delivery, with 37% of respondents reporting an increase in carryout orders. Little Caesars’ leadership role in this important industry trend, coupled with its willingness to look beyond sales and unit growth, has earned the company the 2013 PIE award.

In PMQ’s Annual Reader Census, 37% reported an increase in carryout pizza orders in 2012, proving that customers want their pizza when it’s convenient for them. Savvy pizzeria operators will cater to this growing consumer need.

In 1959, Michael and Marian Ilitch invested their life savings to open a pizzeria in Garden City, Michigan. “Mike liked the name ‘Pizza Treat,’ but Marian didn’t think the name suited Mike since he was so fun-loving,” says Little Caesars president and CEO David Scrivano. “Marian saw Mike as a hero or a ‘Caesar’ in her eyes. However, since he was just starting out in business, she said he was a ‘little’ Caesar. So the couple compromised and named the first store Little Caesars Pizza Treat.”

Since opening in 1959, the Ilitches have given thousands of individuals the opportunity to own their own business through franchising. By successfully franchising the brand, the Ilitches have been able to purchase other successful businesses as well, including the Fox Theater in Detroit, the Detroit Red Wings and Olympia Entertainment. Additionally, Mike owns the Detroit Tigers, and Marian owns Motor City Casino Hotel. “All of their businesses, similar to Little Caesars, are synonymous with fun,” Scrivano notes.

According to Scrivano, research has shown that 86% of Americans associate the words “Pizza! Pizza!” with Little Caesars. Not many companies can boast about that kind of brand recognition. “The phrase was coined in 1979 and was originally used to promote our ‘buy one, get one free’ promotions,” he says. “Over the years, it just stuck. In fact, when I walk through airports with the Little Caesars logo on my shirt, people will say, ‘Pizza! Pizza!’”

Little Caesars has also made a name for itself with popular promotions, such as its Hot-N-Ready pizza, a large 14”, always-ready pepperoni pizza, and Crazy Bread, eight sticks of freshly baked bread topped with the flavors of butter and garlic and sprinkled with Parmesan cheese. These three specialty products stand out most in consumers’ minds when they think of Little Caesars, Scrivano says.

Innovation and fun have given Little Caesars a unique position in the pizza industry, according to Scrivano. But, most importantly, he adds, it’s the value, quality and convenience that form the backbone of the company. “Some of the things that make us unique are our ingredients,” says Scrivano. “Our pizzas are topped with freshly shredded real mozzarella cheese that’s never frozen; our sauce is made from fresh, California vine-ripened tomatoes; and our dough is made fresh daily. We’re the only national pizza chain that makes our dough fresh every day in every location.

“Our customers also really appreciate the value we provide,” Scrivano says. “For the fifth year in a row, Little Caesars was named ‘Best Value in America’ among all major quickservice restaurants by Sandelman & Associates, which includes restaurants serving burgers and sandwiches.”

“One of the most significant corporate programs we’ve ever created is the Love Kitchen,” says Scrivano. “It’s an award-winning, nationally recognized pizza kitchen on wheels that has fed more than two million people in 48 states and four Canadian provinces. In addition to its daily routine of feeding the homeless and the hungry, it also responds to disasters, such as the floods in North Dakota, hurricanes in the Gulf Coast, the attack on the World Trade Center and, recently, an area affected by Hurricane Sandy. It’s very rewarding.”

It has been said that a chain is only as strong as its weakest link. This may be why Little Caesars works so hard to support its franchisees—and why those franchisees feel so inclined to support the company in return. Vicki Dunn-Marshall started working for Little Caesars in 1976 when she was 16 years old. She became a franchisee in 1983 and now owns 24 stores in West Virginia, Southern Ohio and Eastern Kentucky. “Pizza is my passion,” Dunn-Marshall says. “The leadership team at Little Caesars and the culture they create is a big reason they are so successful. The best part about owning my stores is the opportunity I have to help develop other people and see them grow. I’ve helped four other people become business owners themselves.”

Serving Those Who Serve Us

Little Caesars has also received accolades for its Veterans Program, which has helped to open 200 new stores for veterans. “It was introduced in 2006 as a way to thank our veterans for the service that they—and their families—have given to our country,” says Scrivano. “The program provides business opportunities to qualified, honorably discharged veterans that are transitioning to civilian life or seeking a career change. We offer honorably discharged disabled veterans up to $68,000 toward their first store.”

Lloyd Allard, who owns three Little Caesars stores near Clarksville, Tennessee, has been a part of the Veterans Program since 2007. “I was in the Army Special Forces and did two tours in Iraq,” Allard says. “I always wanted to be my own boss. Owning a pizzeria allows me to get my entire family involved, and, after not seeing them for so long, it means everything to see them every day.”

Allard likens running a franchise to being in the Army. “You receive your training and support, and then you go out and do your mission,” he says. Allard’s competitive nature also makes him strive to be the best at what he does. “Opening three stores in three years was one of my biggest successes,” he says. “Most of all, I enjoy the challenge of running a business and interacting with young employees and keeping them motivated.”

Pizza has long been synonymous with football and Super Bowl parties, so college football fans got a treat in 2009 when Little Caesars debuted as the Pizza Bowl title sponsor. “The Pizza Bowl is the Midwest’s only major college bowl game,” Scrivano says. “This past year, the game was played on December 26 at Ford Field in Detroit, and the teams were Central Michigan and Western Kentucky.”

As you’d expect at a game called the Pizza Bowl, Little Caesars served plenty of Little Caesars pizza, branded the midfield and end zones areas and ran its commercials on the big screen. “It’s an exciting endeavor,” Scrivano says. “Between quarters, we do some fun things, such as throwing a football through the mouth of a cardboard Little Caesar to win free pizza.”

So with steady and significant growth over the past 10 years, what does the future hold for Little Caesars and the Ilitches? Scrivano says that the company is well-positioned for continued growth, both in the United States and internationally, including Latin American countries, the Middle East and Canada.

While further expansion and other projects unfold behind the scenes, Little Caesars will continue to encourage consumers to partake in one of America’s favorite meals using the phrase they’ve now become so familiar with: Pizza! Pizza!