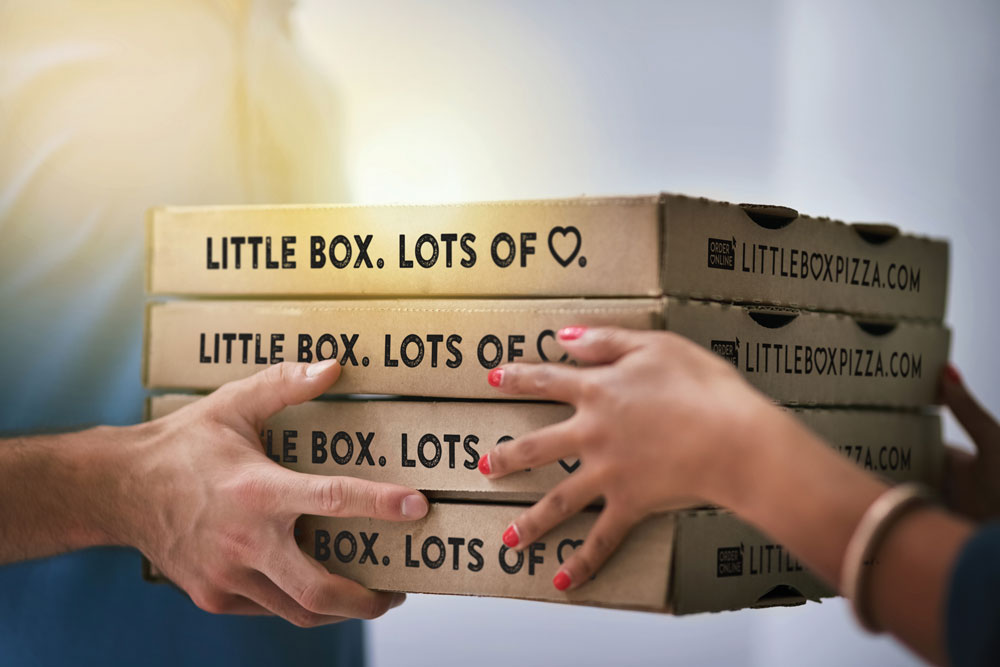 Brad Nagy and Angelo Viscoso, founders of Little Box Pizza in Stamford, Connecticut, have opened four brick-and-mortar locations in New York over more than a decade in business together. But after enjoying so much success, the pair sought a higher purpose: How could they give back to those less fortunate?

The answer came in the form of Little Box Pizza. By tapping into their backgrounds and know-how, they decided to launch well-deserving candidates into business for themselves, via a stationary food truck that churns out high-quality “everyday pies.” And, after recently opening its first location, Little Box is already registering rave reviews and massive media attention. Here, Nagy describes the concept with a conscience—and his high hopes for its future.

PMQ: What was the inspiration behind Little Box Pizza?

Nagy: Angelo and I have been partners a long time, specializing in wood-fired pizza restaurants. But the inspiration came from the desire to do something more significant with our lives. How could we impact other people with our skills and knowledge? We decided to use pizza and the power of small business to help others.

PMQ: What is the concept?

Nagy: The idea was to use a food truck. Food trucks are hot, and we were able to put a full commercial pizza kitchen in the unit. Then we thought, why not get a permanent residence for the truck and serve the community, cranking out some real-deal pizza? So we got a land lease and parked the truck full-time.

We’re organized as a benefit corporation, which is basically a for-profit business with a social mission. And our social mission is to create economic opportunities for people in need. It took some time to plan it out, make sure we could put a pizza kitchen in the truck, and produce with capacity and quality. We custom-built the whole Little Box truck, which is 30’.

PMQ: With so many ways for pizzerias to give back, why did you choose this model?

Nagy: For me, faith and God are a big part of it. We’re called to live a significant life and help other people. What do I know how to do, and how can I serve others? I was connected to [our first entrepreneur] James Gibson, who owns the Stamford location, and he has such an inspiring story. I know how to do pizza and how to run a small business, so we thought it’d be cool to take a guy like James, give him financing, teach him the business, and support him to be successful. The idea was to give somebody a hand up, not a handout. Giving them a small business in a box, they can be successful—and the harder they work, the more successful they’ll be.

PMQ: How did you know James?

Nagy: I had to go to Rwanda, believe it or not! The church I belong to went there to do some service work, and I was with a buddy of mine on the trip. I was telling him about Little Box Pizza and its concept, and he said, “You gotta meet James, this guy I know back in Connecticut.” I thought, “Yeah, sure.” But when we came back, I met up with James, and he was just a fabulous guy. He had all the skills and talent but really just needed an opportunity. James was working as a custodian at our church and had a family and kids, and it was a great fit for James to have a Little Box Pizza.

PMQ: How did you go about opening the first location?

Nagy: We opened in late summer. Before that, we spent three or four months training James in one of our restaurants. He had no restaurant experience, so we taught him how to make pizza and all of the elements of the operation. We really put him to the test, but we were looking for people with the right work ethic, the right aptitude, and, most importantly, the right character and values. James embodied all of those things, and our idea was to create an operation where a guy like him could be very successful.

He had a big learning curve—and, with this being our first Little Box location, we were all learning. It was uncharted territory for us to create a pizzeria on wheels. We’ve built a bunch of restaurants in the past, but for the truck, every inch matters; it was a project to fit in everything we needed. It’s completely different than a brick-and-mortar location. We contracted an experienced food truck manufacturer, but we had to design every element of it ourselves. They don’t know our operation, so we designed the flow and equipment, and then they physically built the truck for us.

PMQ: How is the organization set up financially?

Nagy: For this initial unit, we put up the capital to set up the business—buy the truck and get it going. We’ll share the profits of the business, and James will eventually earn the majority of the profits once the initial investment is paid back.

PMQ: What is the menu like at Little Box?

Nagy: The formula is simple: premium pizza at a good value. We focus on honest, clean ingredients—antibiotic- and hormone-free cheeses and meats, for example. We like to create an everyday, world-class pizza. We use fresh mozzarella on every pie; that’s our standard. We do large and personal pies, and we have signature pies or craft-your-own. We complement the pizza menu with salads, fresh-stuffed cannoli with a bunch of custom cannoli creams, plus meatball sliders and garlic rolls for appetizers. A simple, focused menu was critical to make these folks successful, and to fit within the truck environment.

PMQ: What has the response been so far from customers and the local media?

Nagy: So far, customers have been loving it—the Yelp reviews have been five-star, and we’re really pleased at how much people love the product and the story. I think what we’re doing is so different. Most people don’t get the social mission aspect: “Wait, you’re putting someone else in business?” And we offer delivery from the food truck; customers can order online from the truck, and we bring it to them. We have our own app, online ordering and drivers—so it’s like a real pizzeria, except we’re on wheels that we don’t really use!

PMQ: How will you find owners for future locations?

Nagy: There’s no formal way in which we’re seeking candidates. We’re inspired by the stories we hear and the people we run into. Great-quality people are all around us, and we’re excited to see the ways we’ll connect with these people. The way we found James was so unconventional, it proved to me that these folks will be there. But people can recommend someone they know, people can volunteer themselves if they’re interested, and I think it’ll be fluid, how we connect with future operators.

James had such an inspiring story and is such a great guy—he grew up in the streets and was exposed to gangs at the age of seven, then lived a life of drugs, violence and jail before completely turning his life around and becoming a family man, working in the church. I’ve seen more people pop up because they were inspired by James’ story—to know they too can have a second chance. It’s just been a really good message for people.

PMQ: What are your goals for growing Little Box in the future?

Nagy: I think one of the unknown variables in the business as we started was, “Who are the owner/operators? How do we find the people?” And I think we’ve proven in this first unit that we can find incredibly talented, high-quality people in need of an opportunity like this. As we expand, we’re looking to find more people like James and help put them into business. We’d like to see this grow as far as possible, with dozens or many more units one day. We’ll see where it takes us, but we have big ambitions.