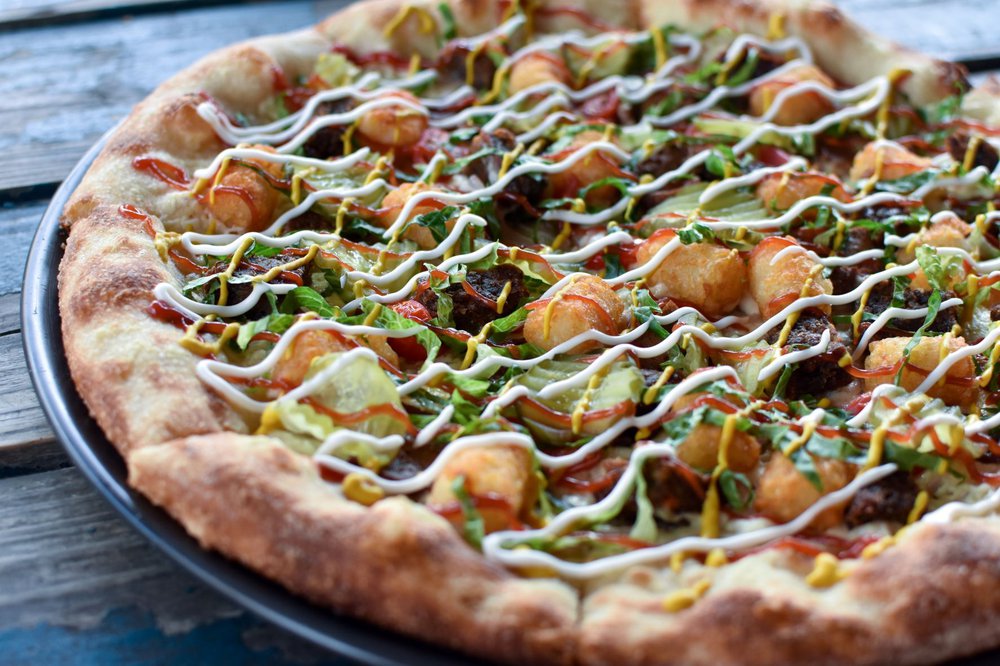 As a vegetarian since his teens, and following a years-long stint as dough maker and menu developer for the fast-growing Via 313 in Austin, Texas, Robbie Lordi, owner of Li’l Nonna’s, was ready to strike out on his own with a pizza concept. The move was a long time coming. “I was a hobby baker at 16, 17 years old, working jobs I was bad at or underqualified for, after I dropped out of college to be in punk bands,” Lordi recalls. “When I moved to Austin in 2013, I finally wanted to get into working in food. I applied at Via 313, and they gave me a shot.”

In 2016, his ownership dream came to fruition, with financial investment from his ex-employers at Via 313 to buy a trailer—but he didn’t want to start just another pizza spot. “I’ve always been kind of put off by specifically vegetarian or vegan pizza places—it always felt like someone who’s vegan or vegetarian trying to make pizza,” Lordi explains. “So I approached it in the opposite way: As a pizza maker and baker first and foremost, how can I make pizza that isn’t just a vegan version of something? The concept from the beginning was to do stuff that’s familiar, but not necessarily just an analog of meats. So, for example, we make our own pepperoni from beets, called Beeteroni, in a 12-hour process—it’s not just a soy pepperoni.”

A Vegan Evolution
As a self-described “huge process nerd” when it comes to dough production, Lordi played an instrumental role in helping scale up dough making at Via 313, and those lessons in a high-volume kitchen helped guide his own business. When Lordi started out in 2016, Li’l Nonna’s was a vegetarian pizza concept, but within the first year it evolved to vegan-only. Since then, the pizzeria has grown exponentially, thanks to that decision.

To make great vegan pies, Lordi and his original business partner and friend, chef Elizabeth Crepeau, first crafted a cheese especially for pizza—one that Lordi made sure melts right, with a recipe that goes beyond the typical oil-and-starch blend, made instead from cultured soy milk, pumpkin seeds and coconut oil. (Crepeau later struck out to do her own vegan concept in the fine-dining realm, and Lordi tweaked the cheese formula to his own recipe, but using a similar process.) “The business keeps evolving,” Lordi says. “We’ve since opened a brick-and-mortar location in North Austin, which we call Big Nonna’s, with homemade vegan ice cream from Sweet Ritual,” owned by Big Nonna’s business partner Amelia Raley.

The original mobile location is now a permanent fixture in a multi-tenant complex called The Yard at St. Elmo, which allows the pizzeria to collect customers from fellow tenants such as the St. Elmo Brewing Company and The Austin Winery. The brick-and-mortar outpost “happened sort of by mistake at the height of COVID,” Lordi says. “We found a place in North Austin that was going out of business, and I knew the owner, so we took over the lease and equipment. We actually started the brick-and-mortar for cheaper than the trailer!” That location opened its doors in November 2020, and in both locations a variety of crusts allows customers to sample Lordi’s dough prowess: Its go-to “Boston takes on New York” style and a square Sicilian both grace the regular menu, while occasional pop-ups find Lordi dishing out naturally leavened Neapolitan crusts for something different.

On the Menu
The most popular pies at Li’l Nonna’s include the Meat Out, which features the housemade Beeteroni, plus vegan cheese, seitan sausage, smoky tempeh and red sauce; and the Vegan Supreme, with mozzarella, black olives, shallots, bell peppers, mushrooms, smoky tempeh and red sauce. “We always have a special, monthly or weekly, that’s either cool and trashy, like a bacon cheeseburger pizza, or something fancy, like the Pesto Peachza, with roasted peach and pesto,” Lordi explains. “We’re able to get a lot of good seasonal produce—and we always use as local as possible, as organic as possible.”

Related: How did a private detective become the founder of Veggie Power Vegan Pizzas?

The company is also expanding its menu to better accommodate vegans, slowly adding more options—not only pints of the vegan ice cream, but soft serve, shakes, gelato, salads, cinnamon sticks and mozzarella sticks. “You can’t underestimate the value of offering some good vegan options,” Lordi says. “When you become not just accommodating but actively attracting those customers, people want to support that. They see it’s not just an afterthought—that they’re actually wanted, and there’s real effort being put into the food.”

Indeed, Lordi credits his dedication to a vegan-only menu as one key to the overall success of Li’l Nonna’s. Within the next two years, he’s looking to expand outside of Texas, hopefully on the East Coast. “I think by going fully vegan, it got us out of that purgatory; we became more of a realized concept,” Lordi says. “We realized that not only could we pull it off, but we’d actually grow as a company. There are 40 great pizzerias in Austin—even the worst Neapolitan here is good. I’m perfectly happy owning a niche market.”