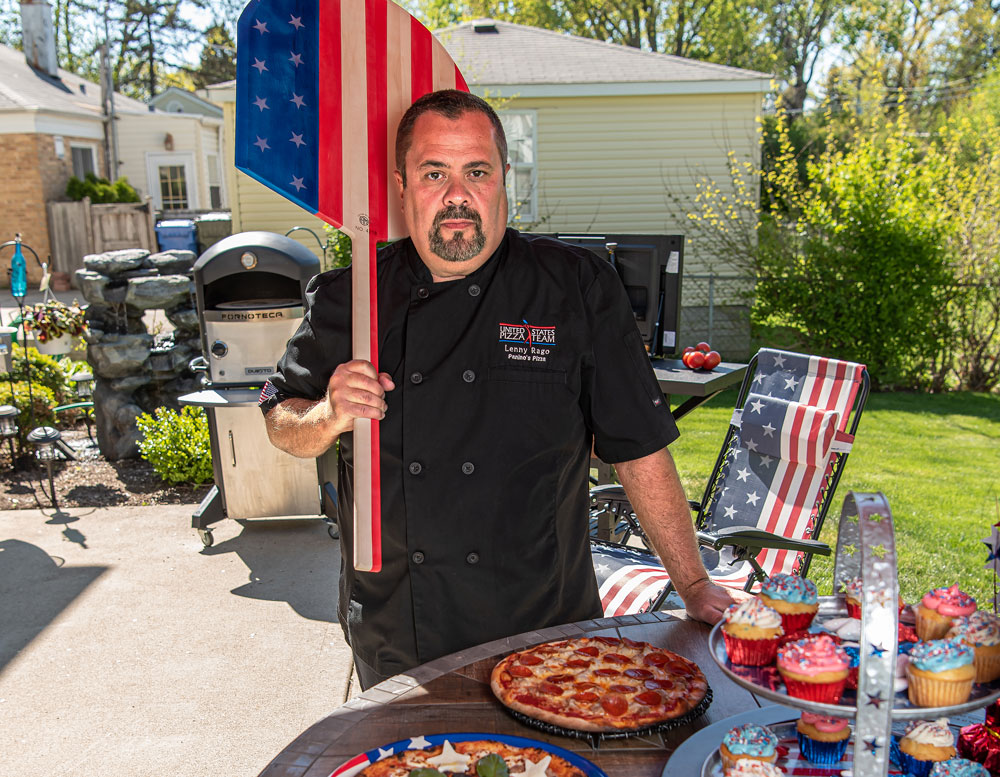 Lenny Rago comes from an Italian family, but he had an all-American childhood in Chicago—tussling and fighting with his older brother, Gino, playing back-alley hockey with his buddies, riding his bike to work at a mom-and-pop pizza shop. He was even born on the 4th of July. But the times, they are a-changin’ in the USA, and so is the pizza industry. And Rago, who co-owns Panino’s Pizzeria in the Windy City area with his brother and their friend, Bruno Brunetti, knows he has to change as well to survive.

Fortunately, he’s the kind of guy who can teach himself just about anything and learn to do it well. That’s why he declared his independence from third-party companies during the pandemic last year, took control of Panino’s digital presence and became master of his own pizza marketing destiny. Now he just needs to figure out where that destiny will take him—and his three-store company—in a post-pandemic world.

It’s a question that’s vexing him these days. “I’ve thought about it a lot lately,” Rago says. “I love dine-in, but I don’t think it’s heading in the right direction. I think we’re a dying breed, and we need to change our thinking.”

Lenny and Gino Rago opened the first Panino’s location in 1997. They brought in Brunetti as a partner and opened their second store in 2003, and the trio then opened a third store in 2009. Prepared from scratch at their restaurants in Chicago, Evanston and Park Ridge, their pizza and other menu items have earned national and international acclaim, with Lenny Rago capturing the top culinary prize in the Pizza Pizzazz competition at the 2018 Mid-America Restaurant Expo in Columbus, Ohio. Both brothers are members of the U.S. Pizza Team and have competed—and excelled—in the World Pizza Championship in Italy.

There’s no question Rago knows what he’s doing in the kitchen, but he’s also the financial mastermind behind Panino’s. And he has been taking a good, hard look at the numbers since the pandemic began. They’re just not adding up.

Related: Why these pizza chains work with third-party delivery platforms

Although he continues to take COVID-19 seriously, he can’t help but wonder if the country overreacted to the spread of the virus and wreaked unnecessary economic havoc on itself. Food prices have shot up, and some key ingredients are increasingly harder to source. Workers are demanding higher wages in nearly every sector of the foodservice business. And many customers remain wary, still preferring carryout and delivery to dining in at restaurants.

“The money it costs to operate a business today is very alarming,” Rago says. “Was the pandemic that bad, or were we being played? Looking back, I feel it was overkill.”

“I reached out to all of the third-party companies and…I cut them all off…I haven’t looked back once, and our sales have actually increased, and my profit margin has gone up, because I took everything into my own hands.”

In the midst of the panic, Rago had some hard decisions to make. “I thought, this is ridiculous, with these third-party companies charging us all these fees. I was paying Grubhub a fee, and Chowly, which was integrated with our SpeedLine Solutions POS, was another fee. I was getting hit by fee after fee, and I wasn’t in control of it. I hated not being in control of it. I decided we needed to do our own online ordering and our own website, and I needed to learn more about the Paycheck Protection Program (PPP). I took it on myself to do the research to make sure I was doing the right thing.” 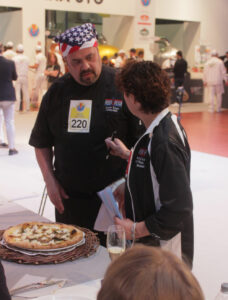 In the spring of 2020, as the pizza industry in Chicago pivoted to delivery and carryout, Rago shut down one of the Panino’s stores entirely during April but kept paying the employees from his own pocket to stay home. He sought advice from industry accountant Michael Rasmussen (PMQ’s “Accounting for Your Money” columnist) to learn the ins and outs of the PPP, applied for a loan and got it. He also dedicated that month to bringing online ordering for all three Panino’s locations back in-house, working with SpeedLine to develop his own system and with digital marketing company Americaneagle.com on his website. “I reached out to all of the third-party companies and told them, ‘I appreciate everything you’ve done, but every dollar counts at this time, and I need to do this on my own.’ And I cut them all off.”

So how did that work out for him? The risk was worth it, he says. “I haven’t looked back once, and our sales have actually increased, and my profit margin has gone up, because I took everything into my own hands,” Rago says.

Savoring this newfound freedom, Rago also began tapping into the marketing power of his POS system, building his own database of 15,000 customers and marketing to them directly through traditional mail, texts and email. “We told them we were cutting out all third parties and offering our own online ordering system,” he recalls. “Now, working with Constant Contact, we’re sending out mailers on a quarterly or monthly basis directly to that customer database and building on it. I might send out 2,000 to 3,000 pieces each week in different postal zones. I constantly rotate it out so that people are always seeing our name. Every quarter, I’ll send out a postcard with an offer of $10 off a $55 order, $5 off a $35 order, or two pizzas for $16.99, that kind of thing. I’ve also been promoting heavily through our Google Business page and through emails and text marketing.”

Rago is an ambassador for Margherita Meats, so the supplier paid for a TV commercial spot that he plans to try out on the local channels. “This 30-second commercial cost me nothing,” he says. “Leveraging my strength with the brands I use is very effective.” 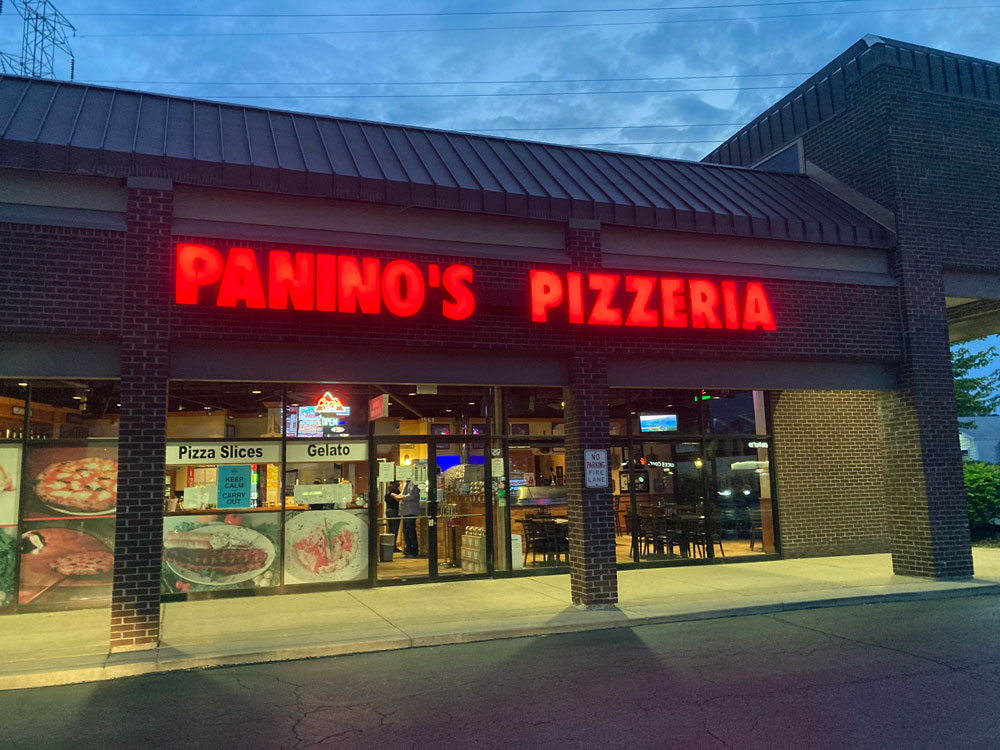 “I’ve thought about it a lot lately. I love dine-in, but I don’t think it’s heading in the right direction. I think we’re a dying breed, and we need to change our thinking.”

But marketing Panino’s is the least of Rago’s problems these days. “We need employees, not marketing,” he says.

He says Panino’s employees can make upwards of $30 an hour or more with tips, but many only want to work part-time. “That’s fine, but now I’ve got to hire three or four people to do one job. My customers get used to seeing the same people, and now they see three or four different people every time they come in. As a server, you build a relationship with those customers, and those relationships are reflected in the tips. And with part-timers, it’s a lot more work for an independent operator like me to have to juggle those schedules.”

Rago was taken aback in a conversation with one young man who trades in the cryptocurrency market. “This kid told me he could make more money trading Dogecoin than coming in to work and answering my phones,” he recalls. “That’s crazy to me. That should be supplemental to your income. You go and wait tables, make $25 an hour, and then go trade your Dogecoins at home and make more. But they have other means of making money now. I just don’t think people want to work in our industry anymore.”

And hiring low-wage part-time kitchen help doesn’t make much sense to Rago, either, considering the depth and breadth of Panino’s menu, which includes everything from artisanal Neapolitan and East Coast pizzas, calzones and pasta dishes to burgers, pork chops, pot roast and chicken.

“Panino’s is a scratch kitchen, family-owned, with 20, 30, 40 different items on the menu, and that’s very hard to maintain,” he notes. “To make our menu is very complex. You can’t have a minimum-wage employee making those dishes. You need a committed, full-time person who will learn that job and stay with you. I can’t have a part-time high-school kid making these dishes—it’s not gonna happen.”

Only the Strong Will Survive

In other words, even after declaring his independence from third-party companies, Rago still has a lot to figure out. The pizzeria industry, he believes, is undergoing “a major shift.” The full-service model might not be the model of the future for operations like Panino’s, even though taking good care of his customers and filling their bellies with a wide range of amazing foods is Rago’s passion.

So what’s the solution? Clearly, delivery is the big moneymaker for the major chains, while some smaller chains are also investing in the ghost kitchen model to cut back their expenses and raise their profits. Even some independent operators, such as past PMQ cover subject Michael Androw, owner of E&D Pizza in Avon, Connecticut, have switched to DELCO only and seen their sales soar during the pandemic.

“I might just have to do that,” Rago says, with a sigh. “But I’ve got a good lunch business. I’m very undecided about it.”

Time will tell whether the shift in customer preferences for delivery and carryout is permanent, but it’s looking that way to Rago. And with rising food prices and labor costs, the advantage goes to Domino’s, Pizza Hut and other big chains. Sadly, raising his own prices is not a promising option. Customers still expect a certain price point for pizza, and that price point is disturbingly low. “When I was a kid, a 16” sausage pizza cost $9.50,” he reflects. “Now it’s $22. In the past 25 or 30 years, you’d think that would have tripled, but it’s barely doubled. That pizza should sell for $30—it feeds four to five people!

“…We’re sending out mailers on a quarterly or monthly basis directly to that customer database and building on it. I might send out 2,000 to 3,000 pieces each week in different postal zones. I constantly rotate it out so that people are always seeing our name.”

“So what does that tell you?” he continues. “These chains have hurt the independents with low prices, so we [independents] have to charge low prices, too, and keep our profit margins really low.”

Rago will keep pondering the problem, but he knows he made the right move by cutting out his old third-party partners back in 2020. “It’s a very challenging world we’re living in right now,” he says. “That’s why you need to declare your independence from these third-party companies to try to retain all the profits you can. We’re working on very low margins with rising food costs, and we can’t continue to raise our prices to keep up. Only the strong are gonna survive.”