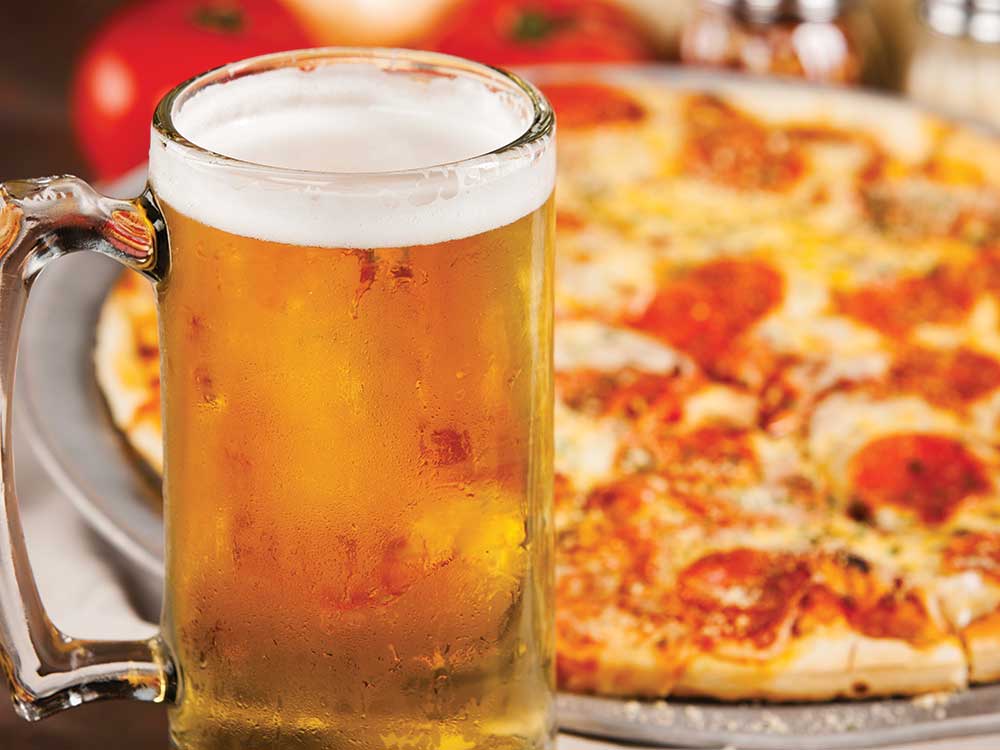 Pizza has long been considered the perfect accompaniment to a frosty beer or a glass of Cabernet, and today’s pizzerias are proving that even themed cocktails can complement specialty pies. But are you making the most of alcohol sales at your pizzeria? According to Jim Sullivan, consultant and CEO of Sullivision.com, the gross profit margins on beverages far outweigh those on food—as much as 80% per serving—but beverages often make up less than 10% of items sold in foodservice operations. So if you have a license to sell beer, wine or liquor (or all of the above), making the effort to beef up your alcoholic beverage program is a no-brainer. Here’s how to do it.

Beer and pizza—now there’s a perfect food-and-beverage marriage. But today’s beer scene is a far different animal than it has been in decades past. Now, craft brewers vie with the big guys for market share, and more customers eschew the typical domestics in favor of local products from smaller producers. “Make no mistake—it’s all about craft brews,” says Stuart Melia, vice president of beverage for Old Chicago Pizza & Taproom (oldchicago.com), with nearly 100 locations nationwide and headquarters in Chattanooga, Tennessee, and Bloomfield, Colorado. “The U.S. beer scene is so vibrant right now that you can be drinking great beer that’s brewed right in your neighborhood. There’s no reason every pizzeria should not be offering at least one or two local/regional beers; the demand is there.”

Today’s brews can be every bit as complex and sophisticated as wine, which is why some pizzerias call out beers on the menu that pair well with their specialty pies. At Sal & Mookie’s New York Pizza & Ice Cream Joint (salandmookies.com) in Jackson, Mississippi, service manager Courtney Culpepper introduced these pairing suggestions, which are now listed on the beer menu. “We’re in a craft beer movement right now, and pairings can make a meal 10 times better,” she says. “When you pair foods with beers, people are interested; it often gets them to try something new, and when one person at the table thinks outside the box, their dining companions sometimes get more adventurous, too.”

For those who are considering beer pairings but don’t know where to start, Culpepper recommends research (hundreds of beer books list food-and-beer pairing suggestions) and simply trying each pizza with different beers to nail down surefire winners. In general, however, Culpepper notes that India Pale Ales (IPAs) complement spicy foods because their hoppy flavor cleanses the palate, while ambers are great with chicken, and brown ales pair well with smoked meats.

But Sal & Mookie’s goes even further by regularly hosting beer dinners; every other month on a Monday, when the business is normally closed, 50 to 60 beer lovers flock to the pizzeria for five courses paired with beers, often from a local brewer. “In October, we did one called The History of Beer, where we brought in a local professor to lead the dinner and compare modern beers to ancient styles,” says Jonathan Webb, bar manager at Sal & Mookie’s. “We have a strong following for these dinners, which we promote heavily through social media and email blasts.”

Meanwhile, many pizza lovers still seek out their old favorites; in fact, at Sal & Mookie’s, the No. 1 seller is Blue Moon. So don’t overlook offering at least a few traditionally popular, mass-brewed beers. “Several beers are good sellers across the board, like Budweiser, Bud Light, Miller and Miller Lite,” says Anthony Russo, owner of Houston-based Russo’s New York Pizzeria and Russo’s Coal-Fired Italian Kitchen (nypizzeria.com). “I like to include local and craft beers as well, plus imports like Heineken and Mona. We are passionate about supporting local businesses and breweries; at our Houston-area locations, we serve Karbach and Shiner Bock—they’re both Texas favorites.”

Finally, when it comes to the wide world of beer, don’t be afraid to offer a variety of categories. “It’s less about brands and more about style diversity: Don’t have five IPAs and five light beers all from the biggest brands and no Hefeweizens or high-alcohol-by-volume beers,” suggests Melia. “Have a great mix of beer styles to cater to any drinking occasion or food pairing.”

As far as the tried-and-true “pitcher and pizza” deal that many have adhered to over the years, Melia believes that while these give great value, they limit guests’ choices—and your sales—because everyone will have to share the same beer. “Instead, I recommend offering smaller beer sizes and encouraging customers to try a variety of beers based on bartender and server recommendations,” he says.

Since the recession hit, fewer customers may be apt to order a high-ticket bottle of wine, especially outside of the fine-dining setting, but that doesn’t mean your vino sales have to suffer. Constantino Anezinos, owner of Zorbas Pizza (zorbaspizza.com), with three locations in the San Francisco Bay Area, has witnessed a 25% sales increase in the last six months thanks to the addition of a celebrity-endorsed wine in his pizzerias that has customers visiting from other states. “Our wine sales were always so-so, until we added Adam Carolla’s Mangria, a sangria made with a wine-based vodka,” explains Anezinos. “We used to sell a case of wine per month; now, we go through 15 cases per week, plus what we offer on tap.” By aligning himself with a product that does its own advertising and quickly gained a large following, Anezinos has not only counted more profits; he counts more Facebook followers, which have more than quadrupled since adding the wine (thanks in part, no doubt, to the wine’s thousands of Facebook fans).

Unlike draft beer, Anezinos notes, there’s no spillage associated with wine, and the novelty of this newer serving option hasn’t tapped out just yet, even in the uberhip Bay Area. To promote the offering, he makes posters announcing daily wine specials and posts them outside his pizzerias. He also offers samples to interested customers (this is easier with wine on tap) and makes sure that all servers try the wine so they can make enthusiastic recommendations. “We buy the wine for $10 and sell it for $20; with wine, you want to make sure the margins are there, and superfancy wines don’t have the markup that less-expensive wines do,” Anezinos notes.

Russo agrees that when it comes to wine, operators should start by minding the basics, such as a great-tasting house wine. “Don’t go cheap; a lot of my wine sales are by-the-glass house wine,” says Russo. “We also make sure our staff is familiar with the wine list to ensure that guests can easily pair a dish with a good wine.”

At New River Pizza & Grill (newriverpizzaonline.com) in Fort Lauderdale, Florida, 80% of sales came from delivery and takeout, but that changed earlier this year when general manager/corporate chef Klime Kovaceski began promoting the dining room, too. Sales in August soared by $16,000 over the previous August—and alcohol sales were a big part of that upswing. Hence, a 10 for $10 wine promotion—10 bottles at a $10 price point—was designed and promoted through local media, Facebook, and promotional cards given to all to-go and delivery customers. “We have wines in the $30-to-$40 range, but more are between $20 and $30,” Kovaceski says. With a laugh, he adds, “A lot of people today don’t want to spend $40 on a bottle of wine just because the name sounds fancy!” And a full training process for staff is a must, Kovaceski notes—every server should be able to answer guests’ questions about the wines you offer.

Indeed, wine can be an intimidating category for many, so don’t hesitate to put descriptions and tasting notes on the menu so that customers know what they’re ordering. Sal & Mookie’s offers plain-English descriptions on its wine list, which were put together with the help of a local sommelier. The pizzeria also sticks to affordable wines to suit its family-friendly atmosphere. “If you’re just a small restaurant and not too expensive, you’ll probably want to limit your choices to eight to 12 wines,” advises Russo. Also, depending on your typical customer and your atmosphere, you may want to offer wines at a range of prices to suit anyone’s tastes and spending habits.

Specialty cocktails, like craft beer, have stormed the bar scene in recent years, with an ever-growing population of mixologists serving up pre-Prohibition-era classics and making their own tinctures, infusions and bitters in-house. If your pizzeria sells hard liquor, there’s no need to get quite as fancy, but you do need to make your drinks high-quality for today’s more discerning clientele.

For example, Sal & Mookie’s recently underwent a complete overhaul of its cocktail program, introducing drinks with a New York theme in accordance with the pizzeria itself. “Pre-Prohibition drinks are so trendy and popular right now, so we did a lot of research and now have a drink for each of the five boroughs in New York,” Webb says. “We use fresh-squeezed fruit juices, quality ingredients and liqueurs, plus fresh herbs like basil, for our new house originals.”

Meanwhile, for those customers who want something simpler (or for those who still want to get their old favorite drink from the previous menu), the pizzeria will be offering up “The Archives”—a list of classic cocktails not listed on the menu, as well as the drinks the pizzeria used to offer—so that customers can choose from a variety of options if nothing on the main menu strikes their fancy.

Finally, when crafting a unique cocktail list, don’t overlook pizza’s Italian/Mediterranean roots—drinks from this region are a natural complement. At Balena (balenachicago.com) in Chicago, for example, pizzas and pastas are offered alongside aperitivo drinks and cocktails that incorporate amaro and bitters from the regions around Italy. In fact, though Russo sells only beer and wine at his locations, he believes “cocktails could be a great seller, especially Bellinis and sangria—both are great with pizza!”