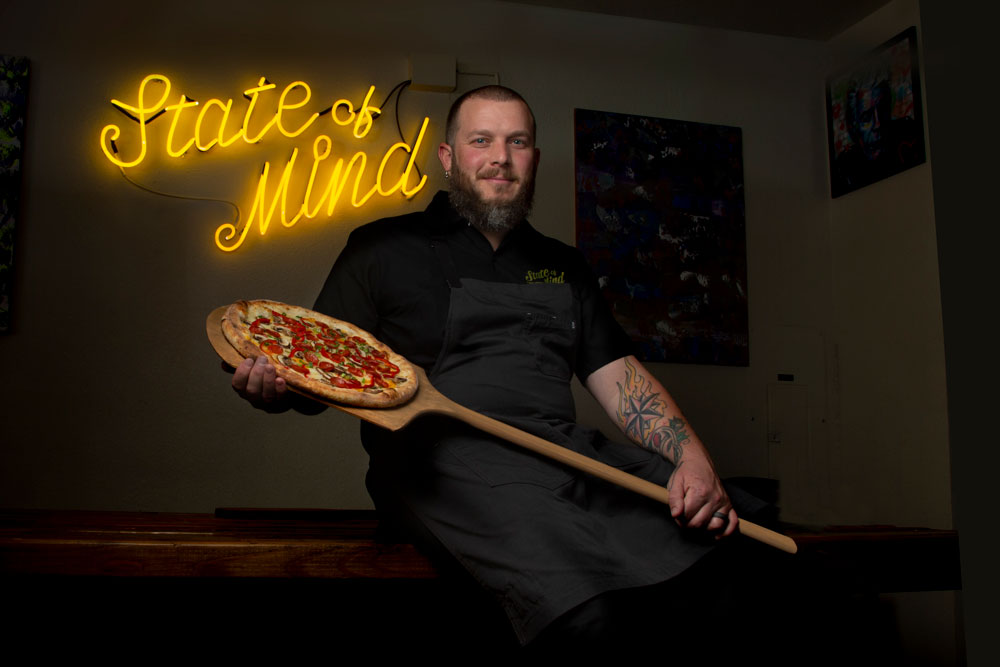 Lars Smith keeps the meats to a minimum and the veggies fresh at his two pizza shops operating under the State of Mind umbrella.

Veggie-based pizzas are a big deal in California’s health-conscious Bay Area. So when pizzaiolo Lars Smith and his partners launched State of Mind Public House & Pizzeria in 2018, they knew fresh produce was the way to go. But plant-based meats? No way, Smith thought at the time. “Plant-based,” he says, “is one of those industry terms, like ‘farm-to-table’ or ‘artisan.’ Once it gets into the larger lexicon of the restaurant industry—where big chains and think tanks start using it—it becomes watered down.”

Yes, Smith is a bit of a purist. But he’s the kind of purist who wins a lot of national pizza-making competitions. As a native Californian, he’s no Johnny-come-lately to the fresh-from-the-earth movement. “We opened as a restaurant that highlights vegetables and seasonal produce,” says Smith, who partnered with his brother Andrew, wife Cristina and partner Amy Alcantar to launch the first State of Mind location in Los Altos and, later, its offshoot, State of Mind Slice House, in Palo Alto. “So part of what we do has always been plant-based. But it’s not about meat substitutes—it’s fresh and seasonal produce that’s really exciting to us. We don’t offer a ton of meat on our menu.”

Celebrating the Golden State
What Smith does offer are innovative and award-winning vegetarian-friendly pies like the Rocket Man (mozzarella, onions, arugula, Estero Gold cheese and EVOO) and the Days Between (mozzarella, Point Reyes Toma cheese, fennel, chicory, apple slices, cream and micro fennel), the latter of which captured first-place honors in the U.S. Pizza Team’s Virtual U.S. Pizza Cup in 2020.

State of Mind’s menu celebrates everything that makes the Golden State special—minus the artifice of Hollywood. As Smith explained to PMQ back in 2019, “It’s a combination of where and how I grew up. Coming from a culinary and farming family that just loved to cook, we were, of course, using local California ingredients….Everything we do here is a reflection of the Californian culinary culture, using as many California products as possible, as well as the cooking techniques, cultures and traditions defined by our great state.”

Fortunately for aficionados of vegan proteins, Smith did eventually come around on vegan proteins. Impossible Meat just happens to be a homegrown California company. “When we first opened, they were knocking on my door over and over again to get us to use [their product],” Smith recalls. “I was like, ‘I don’t want to use it—I’m not gonna use it.’ I wasn’t sure if it was a trend that was going to stay.”

But, like any good restaurateur, Smith knows he has to give the customers what they want. “People were asking for it and wanted to try it. A couple of other restaurants in the area got it, and I was, like, fine, I’ll give it a chance. We started toying around and making our Italian bulk sausage with it and putting it on the pizza. That got really popular, so I was, like, OK, it’s here to stay.”

Creating an Umbrella Brand
Smith is here to stay in the pizza business, too. He got his first taste as a high schooler at Pizza My Heart, where he met Cristina as well as Alcantar. There, Smith grew professionally under the tutelage of then-general manager Leah Scurto, who now owns PizzaLeah in Windsor, California. He has credited Scurto with teaching him the logistics of operating a pizza kitchen.

Smith describes the trajectory of his two businesses as “organized chaos.” He adds, “We want to have fun, and it’s supposed to be entertaining for us while keeping my brother and me and the rest of our group engaged. From the beginning, when we were writing our business plan and conceptualizing what we wanted, we agreed that we didn’t want to find something that worked and just do that over and over again. I know that’s counterintuitive to what most people do in the restaurant business, but we want to explore what we like and create an umbrella brand. Doing the same thing over and over and over is just not something that seems fun to us.”

As Smith points out, State of Mind Public House & Pizzeria and State of Mind Slice House are two “completely different” concepts. “They both have pizza, but [Public House] is really a neighborhood gathering place with a large menu, a huge tap list and an arcade. It’s kind of an ode to the pizzerias that we grew up with in the Bay Area but that aren’t here anymore—the ones we went to after baseball and soccer games. And as a parent, I knew I didn’t have those places to take my kids to now. So my brother and I were, like, ‘We’re doing it.’” 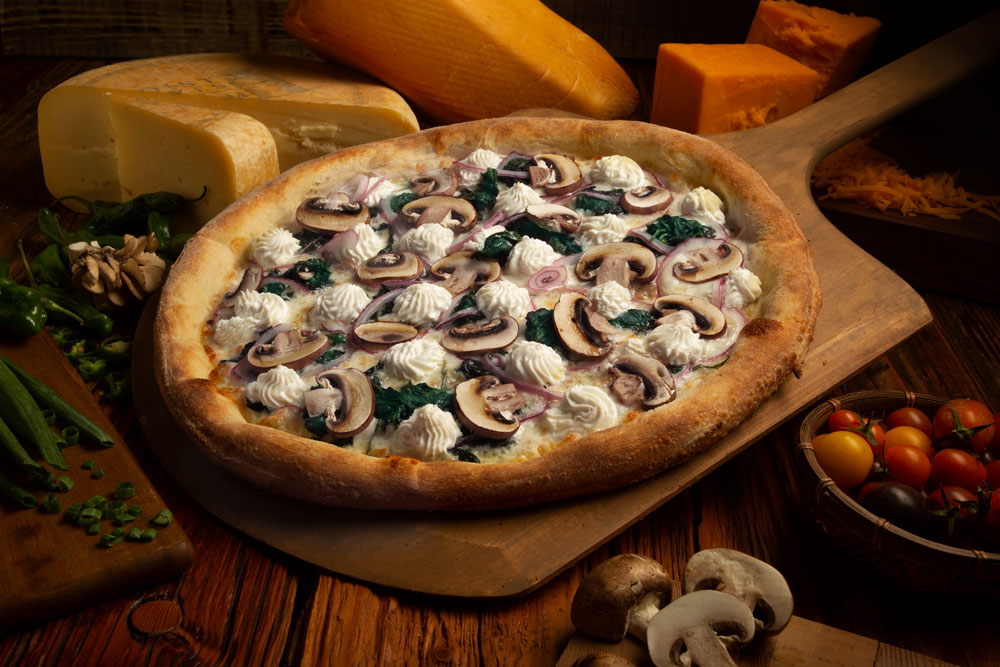 Slice House, on the other hand, is strictly a carryout store, located in a former Taco Bell building. Catering to the hungry-and-in-a-hurry crowd, it offers New York-style slices to-go as well as whole pies, brews, salads and ice cream sandwiches.

But a common thread runs through both shops: a focus on fresh and local ingredients. What are some of Smith’s favorites? “We always go for what’s seasonal, but cauliflower is good all year round,” he says. “Roasted cauliflower on pizza is excellent, very hearty. Broccoli or broccolini are the same way. We do different finishes with pistachios or other nuts. All kinds of different cheeses can provide fat and protein. But I think really good pizzas don’t have to have meat. Find some seasonal produce that you enjoy. In winter, there’s kale, broccoli, citrus fruits, kumquats—those taste better in the wintertime, and they’re readily available to experiment with.”

That’s not to say you won’t find any animal-based meats on State of Mind’s menu. Real-deal pepperoni pops up on several of the specialty pies, along with cider-braised pork on a pizza called the Easy Wind and Hobbs bacon on the Heat and Sweet. In fact, the Elotero, Smith’s spin on Mexican street corn, won the Cal-Mex category in the 2020 Real California Pizza Contest. It’s made with guajillo-braised pork shoulder, California Oaxaca, cotija and Requesóncheeses.

Those high-profile honors took Smith by surprise. “Winning one of my categories would have been amazing, but winning both categories wasn’t even something I considered a possibility,” he said at the time. “I also can’t stress enough how much winning in this specific competition means to me. Using California cheeses—and products in general—is so integral to who I am as a chef.”

In addition, Smith walked away with the U.S. Pizza Team’s 2020 Virtual U.S. Pizza Cup, beating out 28 competitors with his Days Between pizza that showcased fresh California flavors and produce, such as Toma cheese, fennel salami and fresh apples.

Kid-Friendly, Family-Approved
But in keeping with his commitment to taking care of families, including vegans, Smith now offers vegan cheese options as well. He even makes his own vegan cashew cream as an alternative to both dairy and nondairy cheeses. “It’s not stretchy like cheese, but I think it kind of scratches that itch, and it’s creamy,” he says. “We use nutritional yeast, so you kind of get that nutty Parmesan cheesiness to it. I think it cooks very well and kind of tightens up on the pizza. It’s a nice substitute for cheese and fits within our [made-from-scratch] brand and concept. I wouldn’t say it’s very popular in terms of the overall mix of what we sell, but there are people that really, really love it.” Smith features the vegan cashew cream on a gluten-free pie that’s topped with organic sauce, red bell peppers, red onions and his housemade sausage featuring—you guessed it—Impossible Meat.

All of Smith’s pies at Public House are offered in just one size—14”—while whole pies at Slice House measure 18”. To Smith, 14” is the ideal size for a pie. “When I was working at Pizza My Heart, they had a medium pizza, and that was my favorite size,” he says. “I thought it was the best in terms of who it feeds, the structure of it, and how it bakes.…We’ve all been to a pizzeria where you order a small and a large, and you know that [those doughs were] not made at the same time. We don’t have that problem.”

Another problem Smith doesn’t have: attracting families to his Public House location. He offers a children’s menu to let his customers know that “kids are absolutely welcome and that we do care about their experience. I love watching the kids run around crazy here. Just give them a couple of Shirley Temples and some quarters [for the video games]. I think it’s hilarious.”

Although they work hard, Smith and his partners are having just as much fun as the kids, he says. “I think we’re lucky that most of our customers are invested in our success and our family and that they know us. What a joy and a pleasure it is to be able to serve the community and be here doing what we love every day. That’s a little sappy, but I mean, jeez, I get to play with food all day and work with my brother and my wife, and [Alacantra] is one of my best friends. It’s pretty special.”