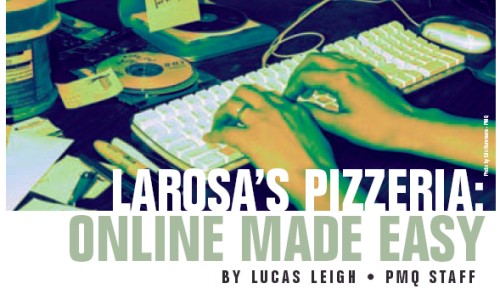 Who says you can't teach an old dog new tricks?

LaRosa's pizzeria opened its doors in 1954 after founder Buddy La Rosa discovered that people liked his Aunt Dina's pizza recipe. The chain, a $123 million a year corporation with 58 pizzerias, grew by leaps and bounds in the late 70s and 80s. To keep its competitive edge over the rest of the technological marketing within the industry, LaRosa's sought out a new marketing strategy; one that would serve two functions: maintain LaRosa's dominance in the Cincinnati market, and bring the business closer to its customers. The solution was Internet marketing.
THE ONE NUMBER SYSTEM

Pete Buscani, LaRosa's executive vice president of marketing, explained what it was like when Pizza Hut and other national chains began popping up in Cincinnati in the late 1980s. "They were taking significant market share," Pete says. "We realized that we had to act soon or face extinction."

LaRosa's, working with the fully-integrated call center and POS software from OneSystem (www.onesystem.com), implemented a "one number" system in 1990 so that anyone near one of their locations who wanted LaRosa's could call that one number and order from any one of the stores. "The number is 347-1111," Pete says, "we put that number into a jingle, and everybody knew it."

Dan Heimbrock, president of Hyperdrive Interactive (www.hyperdrivei.com), the company that helped launch LaRosa's email marketing campaign, recalled that jingle, which appeared on Cincinnati radio stations and billboards. "The jingle LaRosa's used to advertise their phone number was so ubiquitous that even little kids could sing it," Dan said.

In the decade that followed the launch of one number, LaRosa's sales more than doubled. And its customers loved the ordering experience. But in time, consumers would begin to embrace a new technology-the Internet. LaRosa's saw this as another great opportunity to build its business. As Chris Baggot, co-founder and chief marketing officer of Internet software developer ExactTarget (www.exacttarget.com), puts it, "Online ordering is a heck of a lot cheaper than talking to people on the phone, but the biggest problem is getting people to use it." 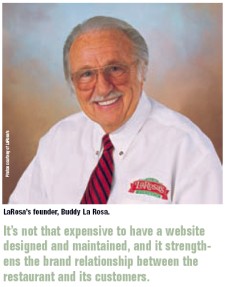 With the help of HyperDrive Interactive and ExactTarget, LaRosa's created a dynamic Internet campaign, and has since developed one of the most pervasive Internet marketing campaigns in the restaurant industry. Chris also noted that Internet orders average 10 percent more than phone-in orders. "It has a lot to do with having a menu in front of you while you're on the website," Chris says. "If you can make extra profit, you can see the motivation in trying to get people to order online." The average ticket order for call-ins is $17 while Internet ordering brings an average of about $19.

Chris stressed that the most important features of Internet marketing to a business are the ease of use, specific targeting, segmenting and the ability to use surveys. Pete said the new email format and qualities make people feel like they are part of a club. "It is the best marketing tool in your arsenal," Chris says, "You can't build a relationship with postcards like you can with email."

Chris says that when most people hear about the benefits of the emails, they want to sign up. When they register for Online Ordering, they "opt in" to receive specials and any LaRosa's news. He also said that it is not right nor is it legal to send emails to customers who don't want the emails. "Internet ordering is a path you have to lead your customers down," Chris says.

First, LaRosa's sent out emails asking people to register and confirm their information within the Internet database for Internet ordering. "We sat down and measured this process so that we would know how many people were using it, and how many transactions were being processed," Chris says. "Between 60 and 70 percent of the people that received emails reacted and registered."

Next, they sent out a personally written letter from company president Mike La Rosa, thanking them for signing up for Internet ordering and instructing them on how to do it.

"If you're a pizzeria owner and you're trying to build your incremental business without building new stores and without hiring more people," Chris says, "The way to do it is to increase the value of your existing relationships. That is what email does for you."

For all other emails, opening rates are usually between 80 and 90 percent. The emails include new menu items, specials and pictures of customers. Chris says it makes people feel like a part of the restaurant's community when they open the emails and see pictures of actual customers. Usually an email letter from the company president, Mike La Rosa, is also a part of the emails. Online orders are between 3,500 and 3,700 per week, and according to Chris, they are about halfway to their goal.

Pete says LaRosa's keeps an open schedule with no planned pattern to when the emails are sent, but did say there are certain days that are good days and bad days to send emails. "We tend to send on late Tuesday or early Wednesday," Pete says. "We try to avoid the Monday stuffed mailbox syndrome."

He also says that keeping emails to a minimum maximizes the opening of emails. LaRosa's sends out emails about every four to six weeks. Pete stresses that it's important to only send out emails when there is some sort of informational or marketing value. "They want either an offer or to hear something new."

Dan says the initial goal of the Internet ordering campaign was to drive people from ordering over the telephone, to ordering on the Internet and to move 10 percent of the call center's callers over to the Internet. Pete says Internet ordering can be a costly move and takes constant attention. For smaller chains and pizzeria owners with one or two shops, Pete says starting off with a website is the best thing to do. "It's not that expensive to have a website designed and maintained, and it strengthens the brand relationship between the restaurant and its customers." He admitted that "if you pay attention to your customers, a lot of good things will happen."