La Nova has established themselves as the place to go in Buffalo for pizza. Rather than spending money advertising and couponing, they have found other ways to create name recognition, which also contributes some additional revenues. They sell La Nova sauces, T-shirts, La Nova labeled bottled water not to mention selling slices in C-stores, bars and events like the Wingstock Festival. 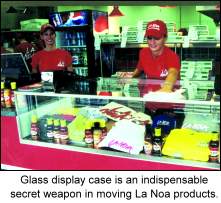 La Nova is famous for giving away T-shirts to their customers. It's not just a one-time campaign with them. They do it constantly and have done it forever. Because of that, there are a lot of human billboards walking around Buffalo. They not only serve to advertise La Nova, they create a demand for the shirts and cause many people to walk in and buy them. When customers come in to the stores, they are confronted with a prominent display of different shirts that are for sale. Just think of how much more likely someone is to wear a shirt if they pay for it and sales of shirts help offset the costs of the free shirts.

Wings weren't always a big seller for La Nova. Pizza was the original hook, but they did sell some wings. Eventually, they stumbled upon a way to get the wings sales jumping. The idea was simple: packaging. Here are some of the secrets if you want to begin building your reputation as the wing king in your area. Combine your large and one item pizza with a single order (10-12) wings. Call it what you think will work in your area. La Nova suggests Mini Pack. Don't coupon the item, but create a menu item with the combination that is a focus. Highlight it without discounting it and see your ticket average rise without sacrificing profits. If you have success, increase your combination options with larger portions of wings with multiple pie sales.

When you go to La Nova, you can buy the same sauces they serve with their wings. What an image booster. This sauce must be good if customers are demanding to buy it. Some get it for free and are honored when they get a free bottle when they purchase a pizza. Some Buffalo grocery stores even stock La Nova's sauces right on their store shelves. That's part of the image marketing that La Nova's does so well. Keeping the La Nova's mystique going.

Joey and 97 Rock started the Wingstock festival six years ago. What is it? Imagine Woodstock if they had Buffalo wings. Wingstock started out as a wing contest with Buffalo Restaurants and Pizzerias competing for Buffalo's Best Wings. After La Nova won the competition, the first two years, many restaurants, including the famous Anchor Bar didn't want to compete anymore. The solution was to change Wingstock from a competition into a wing tasting event. Wingstock is not only a good time; it raises money for a good cause. The event is open to the public and other charitable operators in the area also donate food and people to help serve the masses. Volunteers sell tickets to the event and the money raised at Wingstock goes to the Roswell Cancer Center. Since starting Wingstock, La Nova has helped raise hundreds of thousands of dollars for the cancer hospital. Paying customers get to sample wings and pizza from Buffalo's best.

Buffalo, like your town, has nightlife and this group is perfectly suited for a pizza strategy. People party, get hungry and usually don't have a lot of choices late at night. In Buffalo, something quite interesting happened, and not by accident. Almost all of the nightclubs within Buffalo's party zone began selling La Nova's pizza. Each night, every hour or so, La Nova drivers arrive and restock eight to 12 locations that are retail selling points. A nightclub generally has one person dedicated to handling the money. La Nova delivers the pizza at a discount and the nightclub sells them by the slice for a handsome profit. Some nightclubs even have expensive outdoor neon signs saying they sell La Nova's pizza inside.

There's no doubt that La Nova wings are a favorite in the town that created the Buffalo wing craze. Although La Nova Wings started their climb in 1994 to become a 30 million dollar a year business, the business really started as an argument between CEO Joey Todaro and his father many years earlier. Joey wanted his own identity. Dad finally gave his blessings and the rest is history. La Nova is the only company specifically dedicated to the pizza operator with wing solutions and marketing ideas to make wings an easy and profitable transition. La Nova has no doubt lead the industry towards wings. After all, it was the competition that followed La Nova, not the other way around. Now, La Nova wings are supplied by more than 500 distributors internationally. They can even be found in local Buffalo grocery stores. To help cement the La Nova name in the minds of customers and to satisfy their desire to enjoy the same great tasting wings at home, La Nova launched a line of signature sauces to go with the wings. They sell the sauces both at their stores and in grocery stores. Everything the Todaros have done lately seems to have been successful. How can one family have so much success? Is it really true that nothing creates success like success, or is it that the fanatic power of caring can create one success after another? "Watch the pie, and the rest will take care of itself." – Joe Todaro.