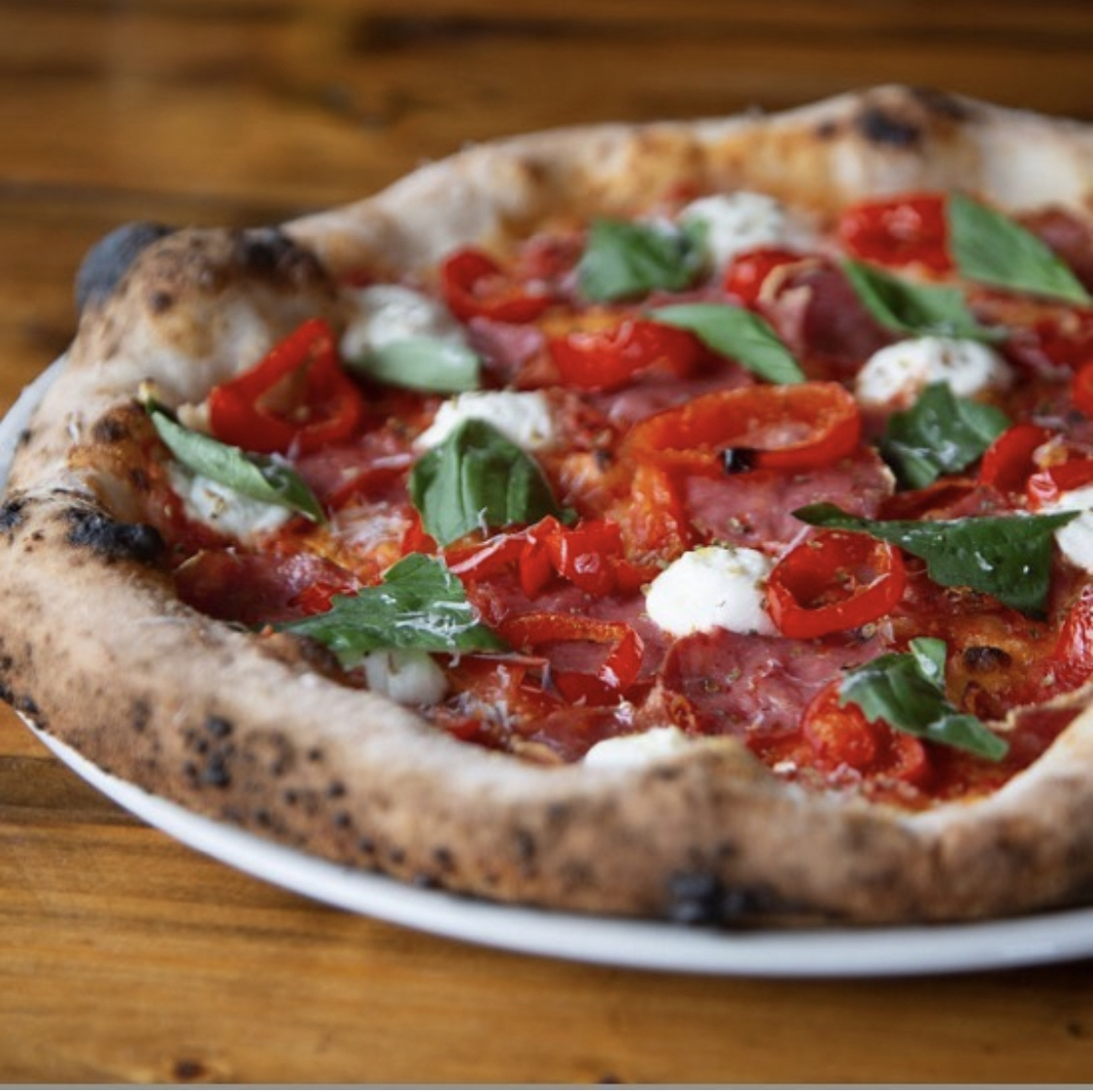 Chris Bianco’s name might be synonymous with great pizza in Arizona, but Phoenix-based Pizzeria Bianco has some high-quality competition. Case in point: LAMP Wood Oven Pizzeria, owned by Lindsay and Matt Pilato. And, yes, LAMP is an acronym for the owners’ names, but the pizzeria’s another shining beacon in the state’s pizza scene. (See what we did there?)

In the past year, LAMP, located in North Scottsdale, has scored glowing coverage (oops, we did it again) from the Phoenix New Times and Arizona PBS. The pizzeria fires up Neapolitan-like pies in a shiny, red-tile oven fueled by oak and pecan wood that reaches up to 800 degrees.

LAMP isn’t new to the Phoenix scene. The Pilatos opened the pizzeria in 2011, and, although they work in the Neapolitan style, they don’t adhere strictly to VPN rules. Writing for the Phoenix New Times, Laura Hahnefeld described their fare as “rustic pies with bready crusts charred and crisp at the rim, thin and soft in the center.”

LAMP offers “nearly 20 varieties of red and white, artisan 12-inch pies, delicate yet able to be laden with top-notch ingredients like San Marzano tomatoes, hand-stretched mozzarella and sausages prepared by DeFalco’s Italian Deli & Grocery in Scottsdale. The pizzas probably won’t be causing Chris Bianco any sleepless nights, but they are some of the Valley’s best.”

Veering off the traditional Neapolitan route “may be what [Matt Pilato] does best,” Hahnefeld added.

“His Dirty Little York pie, which brings together spicy sopressata, sharp provolone, heady roasted artichoke hearts and red peppers, and thin strands of red onion, is more sophisticated than its moniker might lead you to believe. Its well-balanced array of flavors is an exercise in pizza elegance.”

Hahnefeld also singled out the Kicker for praise, calling it “a near-glowing orange pie” that teems with fiery Calabrian peppers and salami spiced with cayenne pepper.

Before founding LAMP, Lindsay said she and Matt rigged their home oven to reach 900 degrees “in order to cook that perfect pizza,” according to Arizona PBS. They’d throw family-and-friend pizza nights to try out their pies and nail down the recipes. “What we’d do is isolate a component—like sauce, dough or cheese—and we’d test, record and adjust, test, record and adjust I don’t know how many times until we really found that perfect pizza.”

Erin Mulay, a pharmacist in Scottsdale, reviewed LAMP for Arizona PBS. “It’s just one of those special neighborhood places, and people, I think, once they discover it, just keep going back. It’s so great.”

And that’s music to Lindsay’s ears. “It’s always been really important for us that we be a point of pride in the community,” she told Arizona PBS. “We may be a small neighborhood pizzeria in a strip mall, but we’re mighty.”