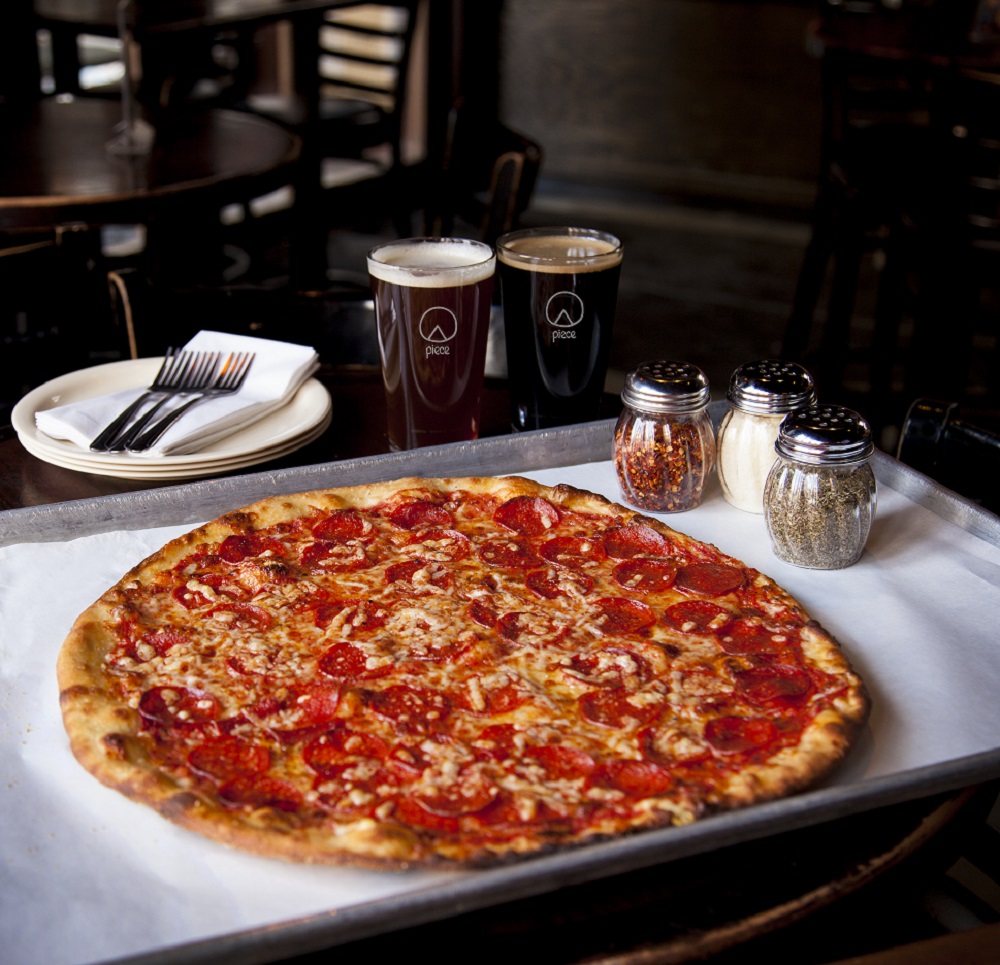 Piece Brewery and Pizzeria is a 240-seat brewpub, which opened in Chicago’s Wicker Park/Bucktown neighborhood in 2001. The restaurant has been named the highest-grossing independent pizzeria in the US.

Piece is also the first pizzeria to bring New Haven-style pizza to Chicago, and to the best of my knowledge, it was the first time any pizzeria served a style other than deep dish or tavern-style thin crust in Chicago.

Piece was the innovator that paved the way for other styles such as Neapolitan, artisanal, and Detroit style to come to Chicago years later. Bill and I have worked together since I founded Chicago Pizza Tours in 2010, so a pizza lunch and conversation was great way for us to catch up.

JON: So when did you make your way to Chicago, what brought you here, and what lead to you opening a New Haven-style pizzeria?

BILL: I moved out here with my brothers in 1983 after graduating from Boston University with the intention of going into the bagel business. We started Jacobs Brothers Bagels and ran that until 1999 until we sold it to Big Apple Bagels. We did not get rich off the sale of our 20 units, but we did alright, and were able to get some real experience and learn the Chicago market. Having the experience of bringing authentic bagels to Chicago, a market that didn’t have that product, lead me to the next step, which was bringing the greatest thin crust pizza anywhere to Chicago. If you’ve not been, go to New Haven and enjoy Pepe’s, Modern, Ernie’s, and the one our pizza is modeled after, Sally’s. I always wanted to do this, I couldn’t find a great thin crust pizza in Chicago.

JON: Well, one that you were accustomed to, we have thin crust but it’s not the same type of fermented dough that you are used to.

BILL: Exactly, it was a different animal. I was confident that if we were able to execute it close to what is baked on Wooster Street that it would be a success, and we took the dough to one of our old bagel kitchens and we made pies that were absolutely delicious. We’re all proud of where we’re from, and bringing this New Haven style of pizza to Chicago was challenging. We had to educate people as to what it was, and how to order it.

JON: So, 1999 to 2001 was your transition from bagels to New Haven pizza. How did you decide on Bucktown/Wicker Park?

BILL: Chicago was my home and I had no intention of going back. We knew the market here and I couldn’t wait to open. My good friend Matt was running operations at Goose Island and he handed me a beer and said, “Try this.” I said, “What is this, it’s delicious.” It was a Wit beer and he told me, “We can make this.” That was the genesis of Piece. Matt had me hire his friend Jonathan Cutler who was out west brewing for Sierra Nevada. This neighborhood was far from finished, but it was an artist community; if you want to find great real estate, follow the artists. There were no pizza places here, and not a single brew pub. The only brew pubs in Chicago at the time were Goose Island and Rock Bottom. There was no place to watch sports, and that’s a big part of what we do.

JON: Let’s talk about that, you do a lot of marketing geared toward cheering on the local teams.

BILL: I grew up a Yankees, Giants, and Knicks fan, but I’m a season ticket holder for the Cubs and Bulls, and I love the Bears. I’ve lived here long enough to become a full-fledged Chicago sports fan. A lot of our promotions coincide with whatever is going on with the sports teams whether it be a Cubs play-off run or a Bears/Packers rivalry, and we use our social media to let everyone know.

JON: Let’s talk about your social media, because I follow a lot of pizzerias and I think you do an outstanding job of keeping current and staying on point with your product. Please give us your handles.

BILL: Thank you, I do all of the posts in house, and our Twitter is @piecechicago with our Instagram being @piecechicago as well. 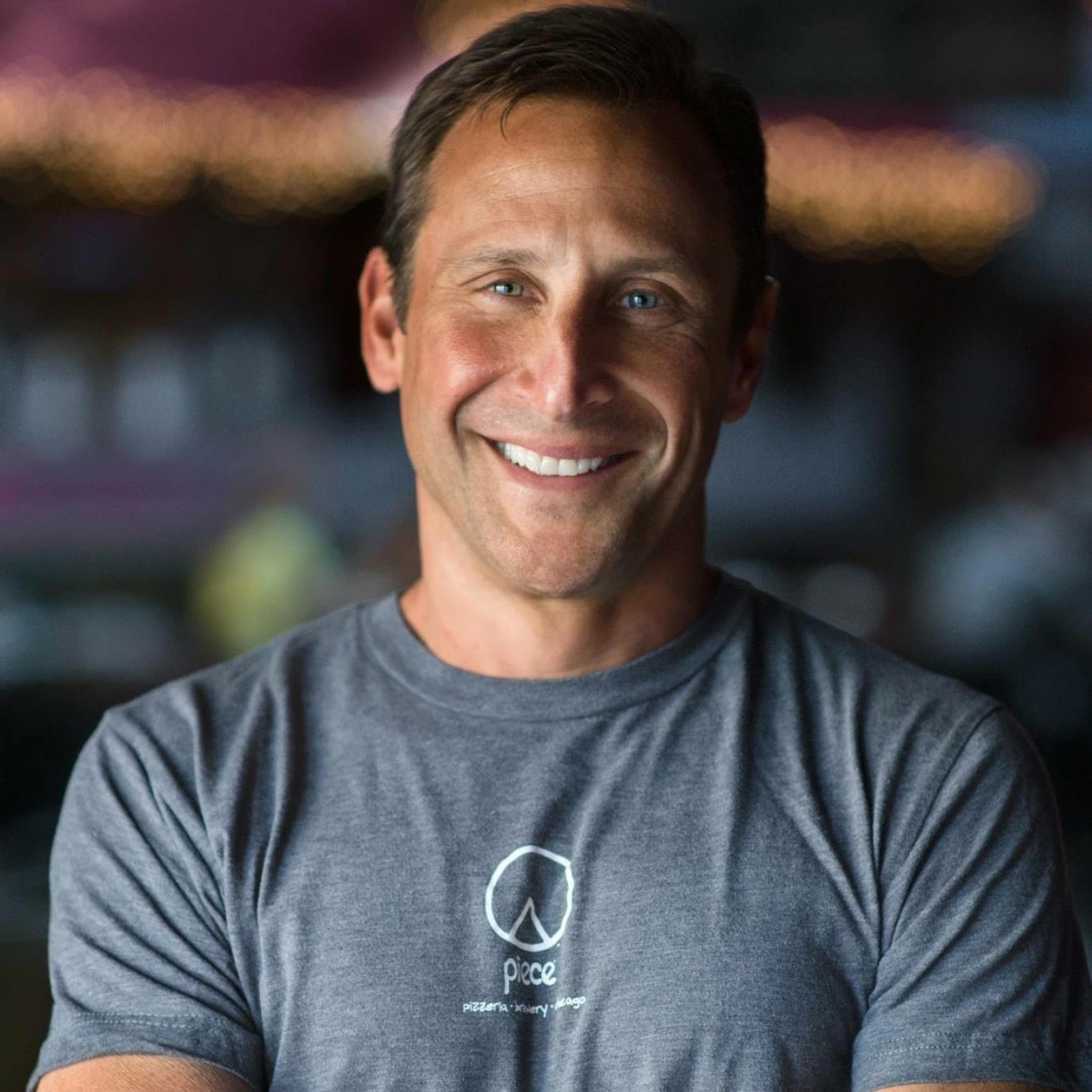 JON: Let’s fast forward to 2014, at this point Piece is a well-known brand and you decide to start working with chefs from other restaurants and local celebrity chefs to collaborate on pizzas, and you did this all for charity.

BILL: I had become friendly with Josh and Christine from Honey Butter Fried Chicken and the idea popped into my head to take their fried chicken and put it on pizza and give a portion of the sales to charity. They were all in, and they chose Pilot Light Chefs as the nonprofit. So, it started with them, then I asked Stephanie Izard, the first woman to win Top Chef. I asked her, and she was excited and jumped on board. We had each of them take a month, but we were looking for a third, so that we could round out Jan/Feb/March. Doug Sohn’s name comes up. Doug owned Hot Doug’s for the past 14 years, which was an internationally renowned hot dog joint, but he had just retired. I didn’t think I was going to convince him being that he had just retired, but I sent him an email anyway.

JON: You sent him an email right after he retired?  I thought you already knew him.

BILL: No, it was just an email, I took a chance and sent it! He responded with “count me in!” and he came by and we created the Hot Doug’s Atomic pizza. Since then we’ve become close friends, having him on board really helped launch this fantastic program where we’ve brought in other well-known chefs. We’ve been able to send over $36,000 to the Pilot Light Chefs nonprofit program.

JON: It is a real win/win for everyone, and that’s one of the reasons why I wanted to come in and talk to you, I’d like to encourage other pizzerias from around the country to follow this program. You’ve raised money, you’ve raised your brand awareness, and you raised buzz for the celebrity chefs that have come in and created their pizzas at Piece. It’s great for everyone, and with social media, all parties are getting tagged including Pilot Light Chefs and sometimes it really just takes that first step.

BILL: That’s right, if you believe in your product sometimes it is just getting prospective customers to try your pizza and this might be a reason to get them through the door.

JON: Is there anything else you want to tell people about Piece?

BILL: When I talk about the evolution of Piece, I tell people that in 2008 we opened up the delivery and take out space. It has a separate entrance with its own register and counter, and it doesn’t get in the way of our dine in business.

JON: Before that was it just a mess of your hostess taking orders over the phone and then running tickets to the kitchen?

BILL: Exactly, it really created a new profit center and made all the difference in our success. We didn’t have the capacity to do delivery and we were trying to do takeout in our dine-in restaurant space, it was inefficient.

JON: Right, so you had take-out customers walking through crowded dining spaces. I think that’s a great point Bill, and pizzerias should look at doing take out as a start-up within their own restaurant. Can you tell us what you call it?

BILL: Sure, our restaurant is Piece, and the take out is Piece Out!

JON: That’s the perfect name, I love it!  So New Haven pizza came to Chicago by way of the bagel, and now what is the store that’s directly west of where we are sitting?

BILL: It all comes full circle like a bagel. Following some success, I was able to buy the building in 2008. I had a tenant that ran a small salon, and they were looking to get out of their lease in 2014. The space was 1,200 square feet, and it seemed fitting to get back into the bagel business. I no longer own the name Jacobs Brothers Bagels, but using our old recipes, I opened BroBagel in 2014. BroBagel has the same mission of bringing authentic east coast bagels to Chicago. My brothers aren’t involved in it, but there are pictures of all of us everywhere inside because family is what makes this all possible. It’s a small space, but it’s packed.

Jonathan Porter is the owner of Chicago Pizza Tours and a correspondent for PMQ Pizza Magazine.